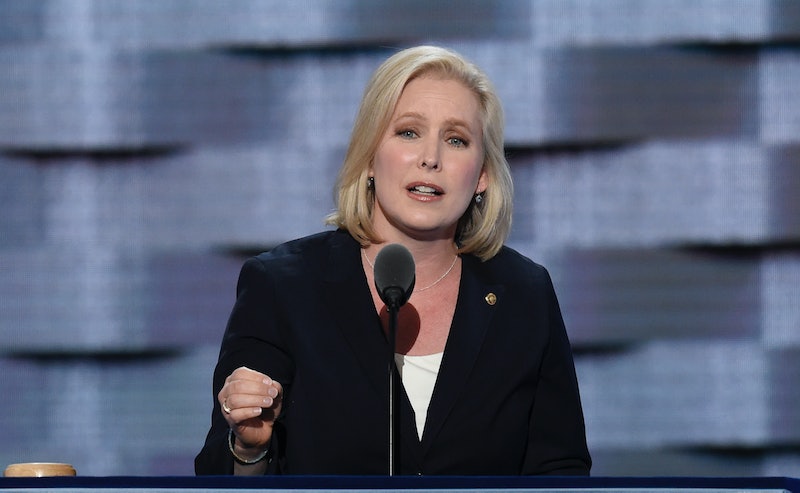 In what has been described as a "vote-a-rama," the Senate spent Wednesday night into early Thursday morning voting on a budget resolution that would allow Republicans to repeal of the Affordable Care Act (or, if you prefer, Obamacare) with a simple majority, without any Democratic votes. Democrats used the session to highlight all of the most popular aspects of the law and called on Republicans to vote to protect them. All of these measures — allowing people with "pre-existing conditions" to obtain coverage, allowing children to remain on their parents' health insurance until age 26 — failed, though Republicans have said they want to preserve them.

One of those votes was on contraceptive coverage. Under the Affordable Care Act, all plans on the individual marketplace are required to provide contraceptive care, as well as women's health counseling and pregnancy services, without any extra costs. Considering the insistence Republicans have that any women facing a pregnancy must give birth to that child, it seems like a reasonable assumption that they'd also want to ensure that those pregnant women have access to the healthcare they need. Considering that the cost of contraception is so much lower than the costs of pregnancy, or abortion, it seems like a reasonable assumption that Republicans might want to preserve it.

Democratic Sen. Kristen Gillibrand from New York made a speech from the Senate floor fighting for these health benefits for women, which you can watch below.

Gillibrand's speech felt to me like it was pointed straight at Republicans. A few months ago, when the tape of Donald Trump bragging about sexually assaulting women came out, many Republican men were criticized when they expressed outrage by talking about their wives, their mothers, their sisters, and their daughters, rather than standing up for morality on its own value. When Gillibrand entreated upon her fellow senators to protect women's health coverage "if you love women, and if you love your mothers and daughters and wives," it was a reminder.

Gillibrand has long made women's issues a priority. In 2013, she proposed what was called an "American Opportunity Plan" with a direct desire of helping women enter the workforce and grow the American economy through supporting women's advancement. In 2014, she published a book, Off The Sidelines, about her experiences as a powerful woman in the Senate, a body still mostly full of men.

"So if you love women, and you love your mothers and daughters and wives, please do not unwind the Affordable Care Act. We need women’s health protected."

Gillibrand has been talked about as a potential 2020 presidential candidate, and if she is, you can bet that she will make women's welfare a central aspect of her run. After Hillary Clinton lost the 2016 presidential election, the Democratic party lost one of its most longstanding and outspoken advocates for women from the national stage. Gillibrand, who was appointed to her New York Senate seat after Clinton vacated it to become Secretary of State, was on Clinton's list of VP potentials, and even said she was inspired to run for office directly by Clinton, looks ready to take her spot, just as she did in the Senate.

On Thursday morning, she spoke in that Senate, fighting for women's healthcare. I doubt it will be the last time.