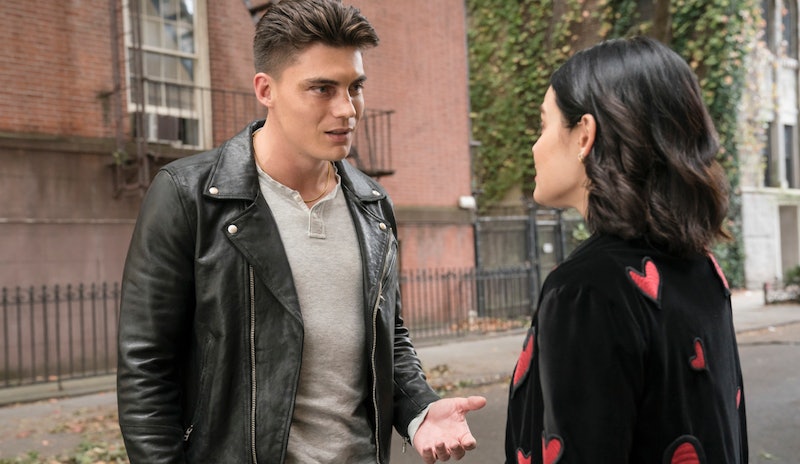 If you've been watching the CW's new Riverdale spinoff Katy Keene, you may have noticed that Katy's boyfriend K.O. has one thing in common with Riverdale's Archie Andrews: they're both boxers. According to co-creator Roberto Aguirre-Sacasa, though, it was just a happy accident. "It was so funny — we did a big entire season of Archie as a boxer, and it was never imagined that Archie was going to be like Raging Bull, but halfway through the season, we started developing Katy and we were like, 'Katy's boyfriend [in the Archie comics] is a boxer,'" he told Entertainment Weekly.

Still, they kept the storyline because, "it just felt so perfect that Katy Keene, who's in this world of fashion has this bruiser boyfriend who is also a boxer," added co-creator Michael Grassi. "What's nice about K.O. is that he also has a dream. He wants to be a huge boxer and box at Madison Square Garden one day the same way Josie (Ashleigh Murray) wants to sing at Madison Square Garden one day."

According to Cherrymeltdown, a website run by the grandson of original Katy Keene illustrator Bill Woggon, K.O. is based on Woggon's father, who was a boxer. Though in the show K.O. and Katy seem quite serious, they had an on again, off again relationship in the comics; one of the many covers floating around the internet shows K.O. being pursued by Katy's rival, Gloria Grandbilt (in the series, this character is Katy's boss at Lacy's department store).

But K.O. also had some competition for Katy's affections — namely Randy Van Ronson, who's set to be played by Sterling Knight in the CW show. As a wealthy, snobbish blonde, he's the opposite of K.O., who Deadline describes as "a humble, protective, salt-of-the-earth guy who makes ends meet as a personal trainer and a bouncer."

It should be noted that Archie fought a character named Randy Ronson on Riverdale, but that's probably just another coincidence (in Riverdale, the character was played by Darcy Hinds, not Knight). Still, it sounds like someone from Riverdale will be paying K.O. a visit in the future.

"We are going to have one more [Riverdale/Katy Keene] crossover that we can't announce yet, but [it's] really fun," Aguirre-Sacasa tease to EW. "[We] will definitely see someone from Riverdale and K.O. face off in the ring."