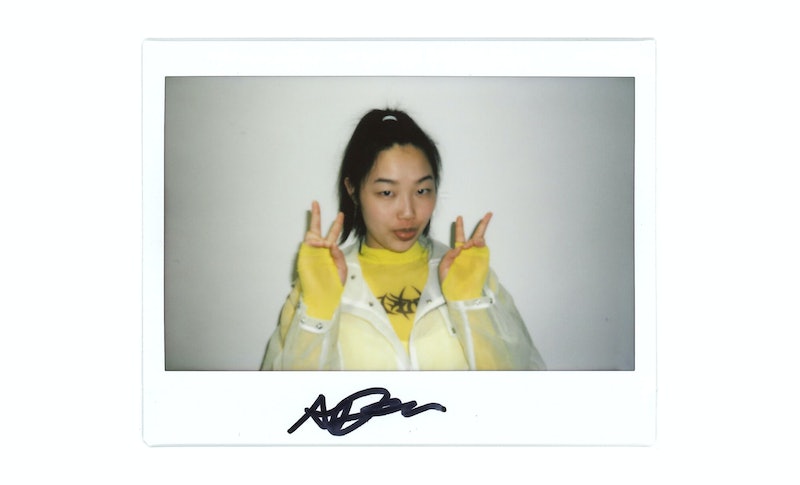 When celebrities hang out with Bustle writers, we want to give them the chance to leave their mark. Literally. So we hand them a pen, a piece of paper, a few questions, and ask them to get creative. This time, Korean American pop star Audrey is leaving her mark in the Bustle Booth.

Audrey's music career started with a PowerPoint presentation. The 19-year-old singer knew she needed a sales pitch if she was going to convince her Korean parents to let her take a year off from NYU's Clive Davis Music Institute to become a pop star. "I literally had charts and pie graphs," Audrey, whose last name is Chu, but whose stage name is just her given name, tells Bustle. "I just wanted to make it look good."

Her presentation following her freshman semester laid out a cost-benefit analysis for going back to college after taking a gap year, clearly worked. Today, She has a buzzy new single, but that might not have been possible without her parents' support. "For a lot of Korean parents, that's not really stable," Audrey says of leaving school to pursue music, "which makes sense because a lot of first generation parents have worked so hard to build stability."

Being first generation Korean American is an intrinsic element of Audrey's music in ways that she can't even explain. Having grown up on traditional Korean music and Kanye West, her sound is hard to define — "I’m a mix of American and Korean culture and the sound is kind of parallel in that way," she explains — but that hasn't stopped people from trying. "Someone in L.A. said, 'You're making music that sounds like if Sade did trap,'" the New Jersey native says. "I feel like that’s a pretty good representation of what I’m trying to get at."

Her latest single, "Soufflé," is a coming-of-age anthem that deals with the pressures facing the under-21 set. On it, she sings about feeling "so washed up."

"To sing about hitting rock bottom and hating and loving yourself at the same time, it’s something that’s not really talked about a lot," she says. "I feel like we all have bad days, but to openly embrace it is something people find refreshing."

"Refreshing" feels like the right word for what Audrey is doing on singles like last year's "Party," which rivals the saddest of Drake offerings. Just like fellow teen pop queen Billie Eilish, Audrey's making music on her own terms.

"I’ve never been the type to pressure myself to fit some kind of box or stereotype," she says, though representing for Korean Americans is something she takes seriously. "I know so many Korean Americans that are awesome and deserve to have their stories told," she says. She notes that Sandra Oh was the only Korean American celebrity she grew up seeing. It's why when it comes to pop culture representation, she approaches the subject with a sense of urgency: "If not now, then when?"

Now, Audrey's working on her debut album, which she hopes to drop later this year. She wants to experiment with traditional Korean sounds on the release — which she says is already filled with "weird sh*t" — but her ultimate dream is to collaborate with producer and rapper Flying Lotus, whose music, she says, got her through a tough time.

Before her gap year is done, Audrey has another goal she'd like to cross off her list. "I really want to learn how to ollie because I skateboard," she says, "but I don’t know how to do tricks."

To find out what else Audrey is into right now, check out her answers to our Bustle Booth questionnaire below.

More like this
Lauren Lyle Is Keeping The Contents Of Karen Pirie’s Bum Bag A Mystery
By El Hunt
'Grey's Anatomy's New Intern Got Advice From Dr. Bailey Herself
By Grace Wehniainen
On 'The Handmaid’s Tale,' Christine Ko Fights Back
By Gretchen Smail
Everything To Know About Taylor Swift’s 10th Studio Album, 'Midnights'
By Grace Wehniainen and Jake Viswanath
Get Even More From Bustle — Sign Up For The Newsletter