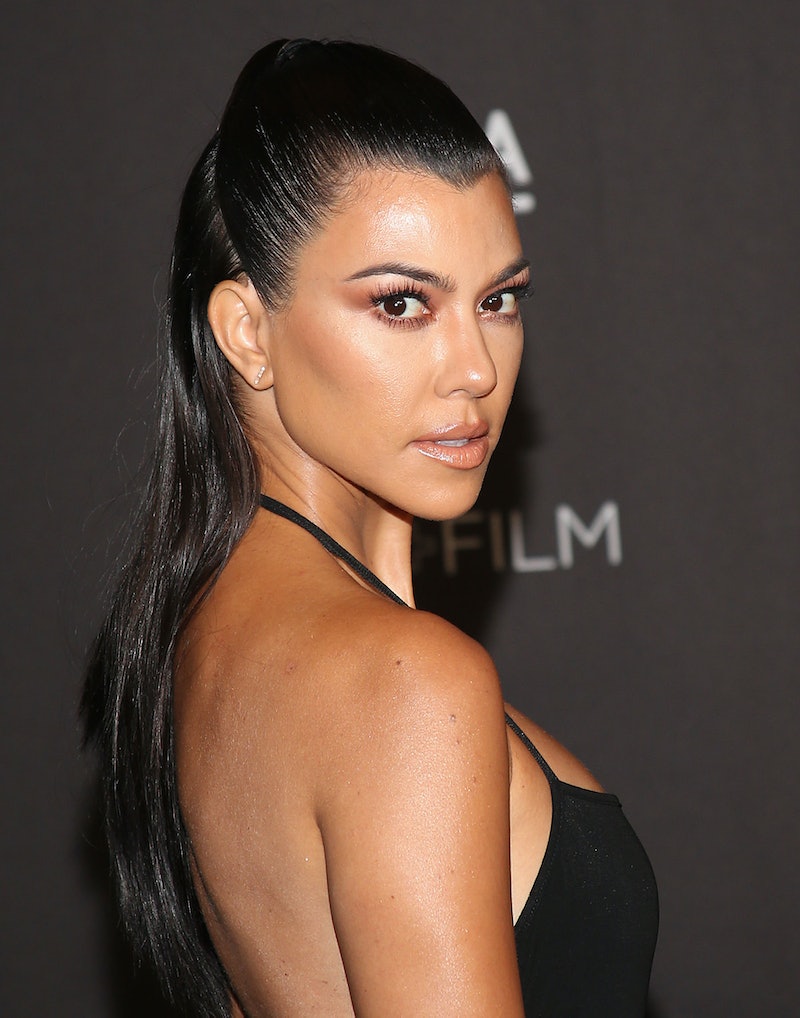 Kourtney Kardashian is the latest cover star for Paper magazine's digital edition and not only did she rock some ultra-glamorous looks for the issue, but she also opened up about being friendly with her ex and his new girlfriend. As People noted, Kourtney Kardashian's bond with Scott Disick and Sofia Richie makes her especially "proud." And given just how positive the trio's relationship has been, she has every right to be.

During her interview with Paper magazine, published on May 23, Kardashian explained that the mature nature of her relationship with Richie and Disick (with whom she shares three children, Mason, Penelope, and Reign Disick) is "probably the thing I’m most proud of.” In case you weren't already aware, the Keeping Up With the Kardashians star has frequently gone on trips with her ex and his new girlfriend, which serves to showcase just how much they truly get along. (Kardashian also touched upon the topic of vacationing in her latest interview, saying, “I don’t think we’ll go on every trip together, but I love that I’m invited.”)

All three of celebs have also been vocal about keeping things positive and cordial, whether by posting group photos from their vacays or speaking out about their penchant for world traveling as a blended family, just as the Poosh founder did recently.

This isn't the first time that Kardashian has opened up about the incredibly positive dynamic that she has with Disick and Richie. In February, during her appearance on the Today Show, she was asked about her co-parenting relationship with her ex and her modern family vacations. Unsurprisingly, she had nothing but kind words to say about Lord Disick and his new lady, saying:

"We travel together and … I think it’s a good message to show other people. I’m not doing it for that reason, but I think the positive things that we are doing, it’s nice, too.”

While everything appears to be smooth sailing for the Kardashian-Disick-Richie crew, it may not have always been that way. According to Entertainment Tonight, they had to really put in the work to form such a strong relationship. "It took some time for everyone to be comfortable around one another," a source said, "Kourtney sees that Sofia is good for Scott, who has been in a really great place, and [she's] happy for the couple."

Ever since they did become a tight-knit group, the three celebs have been seen on numerous vacations and outings together. Back in December, Kardashian, Disick, and Richie (along with Mason, Penelope, and Reign) celebrated the holidays in Mexico. The father-of-three even highlighted the trip on Instagram by posting a photo of himself, his ex, and his current girlfriend, and jokingly writing, "What more can a guy ask for. THREE’S COMPANY."

They then traded in the sun for the slopes when they all traveled to Aspen, Colorado, also in late December, for a ski vacay with the extended Kardashian family, per ET. Following their holiday fun, Richie reportedly made an appearance at Kardashian's Finland birthday getaway in April. If celebrating a birthday together wasn't major enough, the model even hung out with the Poosh founder solo during a spa day in early April, which showcases just how close the two have become.

Everyone's favorite, modern-day version of "three's company" has clearly maintained such a positive relationship, especially for the sake of Kardashian and Disick's three young children. And like the reality star said, that is something that they should definitely be proud of.

More like this
Kim Kardashian Reveals Her Response To Kanye’s Fashion Opinions
By Jake Viswanath
Stanley Tucci & Felicity Blunt’s Relationship Timeline Might Make You A Little Hungry
By Jake Viswanath
Who Is Nick Cannon Dating & How Many Kids Does He Have?
By Jordyn Tilchen and Radhika Menon
Hailey Bieber Just Responded To *That* Viral Met Gala Moment
By Radhika Menon and Sam Ramsden
Get Even More From Bustle — Sign Up For The Newsletter