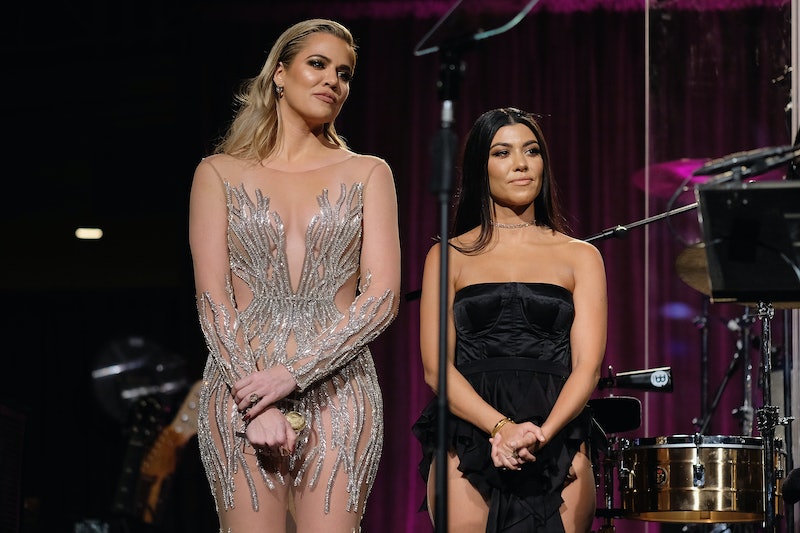 The Kardashian family is currently living it up on their vacation to Turks and Caicos and, of course, they're chronicling the trip on Instagram for all of their fans to see. In the biggest and best blast from the past, Kourtney and Khloé Kardashian recreated their Miami spinoff poster, proving that they haven't forgotten about their many adventures together.

On May 17, Kourtney posted a photo of herself and Khloé, complete in their bikini best, as they posed on a yacht, in a direct throwback to their Kourtney & Khloé Take Miami days. In case you forget about that period in Kardashian history, she also included the poster from their Keeping Up With the Kardashians spinoff (which premiered almost 10 years ago back in August 2009), that featured the tagline, "They're Sisters. Not Saints."

If you didn't watch the series when it originally aired, you missed a ton of iconic moments from all of your Kardashian family faves. During the course of the show, viewers followed Khloé and Scott Disick's seemingly endless feud (years later, they've obviously put their differences aside), Kourtney finding out that she was pregnant with her first child, and Kim Kardashian telling her sisters that she was pregnant with her first baby. In other words, Kourtney & Khloé Take Miami (and, in its third season, Kourtney & Kim Take Miami) is an underrated icon in the Kardashians' filmography. So, it's nice to see the fam pay tribute to the series in such a fun way.

Based on the comments for their throwback, the sisters' fans and friends alike would be down for a Kourtney & Khloé Take Miami revival. Kim's longtime makeup artist, Mario Dedivanovic, is living for their photo, as he wrote, "Omg take miami. I did that makeup, miss those days."

Family friend Larsa Pippen wrote simply that she was "Obsessed" with the ode to the spinoff series.

Jonathan Cheban commented that they should bring the show back. And, honestly, can that please happen?

Of course, Kourtney and Khloé didn't just post throwbacks to their Miami days, they posted numerous photos and clips from their tropical getaway. The Good American founder took to Instagram to share some snaps of her vacation, including more than one that featured her adorable daughter, True Thompson. On May 17, she posted a photo of her smiley tot and captioned it with, "My Water Baby 💞"

She also posted a photo of herself and True during their hangout on the beach. In the snap, Khloé can be seen gazing adoringly down at her daughter, as True plays around in the water. The reality star captioned the photo with, "Paradise Found," which says it all about their lovely, relaxing vacay.

In addition to her throwback post, Kourtney also shared a clip on Instagram of herself frolicking in the ocean during a nighttime dip. If you listen closely to the video, you can hear what sounds like Kris Jenner saying, "Oh that's so pretty," in regards to the "2:00am moonlight" stroll.

Based on all of their Instagram posts, Kourtney and Khloé not only had a blast in Turks and Caicos recently, but they also showcased that their Miami days are still on their minds.