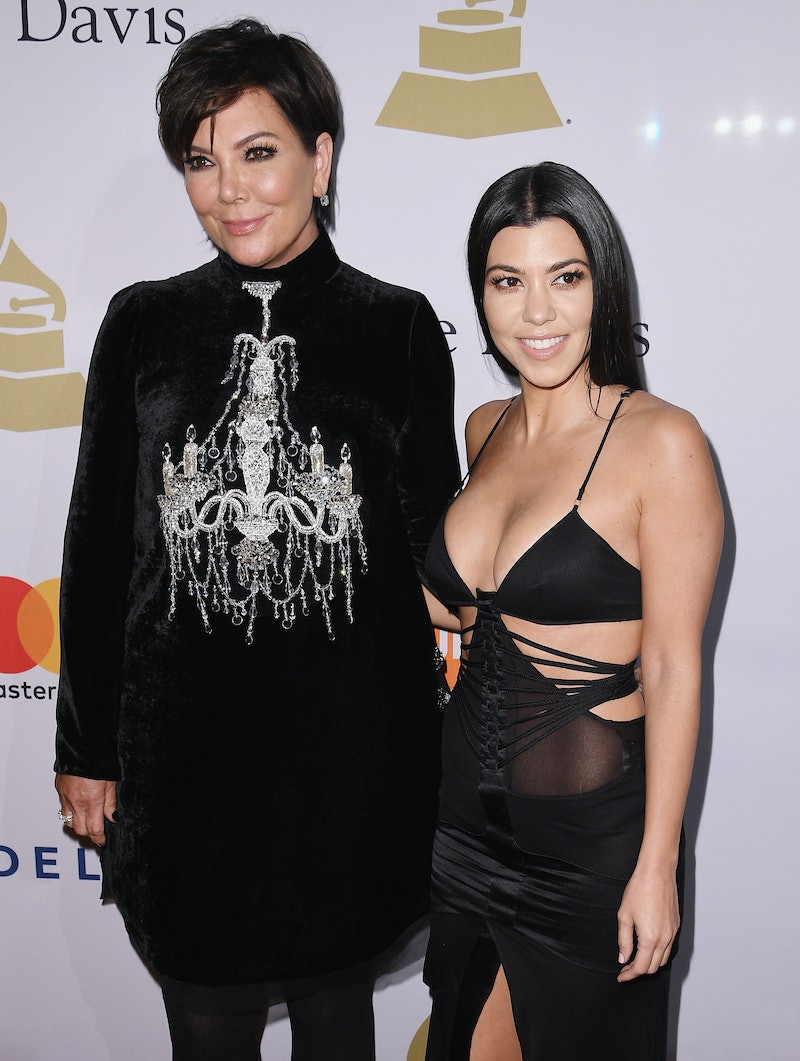 This week on Kourtney and Kris Take the Uncanny Valley, the newest wax members of the wax version of the Kardashian-Jenner family have been unveiled in all of their waxy glory. The new wax figures of Kris Jenner and Kourtney Kardashian created by Madame Tussauds have arrived. On Thursday, May 9, the matriarch of Keeping Up with the Kardashians posted three photos she snapped of the sculptures that have been unveiled at Madame Tussauds New York, and if I am being perfectly honest? The statues look like they could spring to life at any second and immediately pull up a seat at a kitchen island and tuck into some giant salads.

Perhaps this means I need to adjust the brightness on my laptop or update my eyeglass prescription or stop being so easy to dupe (or maybe it is a messy combination of all three!), but on first glance, I thought the first two photos were pictures of the real Kris and the real Kourtney posing in front of a flower wall. I could not wait to see the wax statues that Kris's caption promised (what can I say? I love a Madame Tussauds creation), so I clicked on over to the third photo in her post.

“How amazing is this!?" Kris wrote in the caption. "Our new wax figures at @nycwax#madametussaudsnewyork, opening Tuesday! Me, Kourtney, Kim, Kylie, Khloé and Kendall will all have our wax figures together for the first time. #DoubleTrouble#MadameTussauds @kourtneykardash@coreygamble”

Kris also took a video of the wax figurines and kindly posted it as an Instagram Story. "Kourtney, we look so real, I actually thought you were going to start talking,” Kris said in the clip. “Fabulous. Thank you, Madame Tussauds. Wow, what an honor.”

It was about darn time some statues were made in their likeness. Kris and Kourtney are the fifth and six members of the Kardashian-Jenner family to get their very own Madame Tussauds wax figures, and as Kris noted, these two new sculptures will be on display with the wax versions of Kim Kardashian, Kylie Jenner, Kendall Jenner, and Khloé Kardashian. The Wax Kardashian-Jenners will all be together at the Madame Tussauds in New York City starting May 14.

OK, if Kris doesn't make the entire family pose with all of the wax statues for the Kardashian-Jenner holiday card this year, then what's the point? If the Momager were to make that happen, it would literally melt my entire being like a clump of wax under a heat lamp.

More like this
Every ‘RuPaul’s Secret Celebrity Drag Race’ Contestant’s Identity Has Been Revealed
By Brad Witter
Jonathan Bailey’s BTS ‘Bridgerton’ Photos Celebrate 6 Months Of “Kanthony”
By Stephanie Topacio Long
Bella Hadid Will Think Of Her Spray-On Dress From Paris Fashion Week “Forever”
By Brad Witter
Who Is Nick Cannon Dating & How Many Kids Does He Have?
By Jordyn Tilchen and Radhika Menon
Get Even More From Bustle — Sign Up For The Newsletter