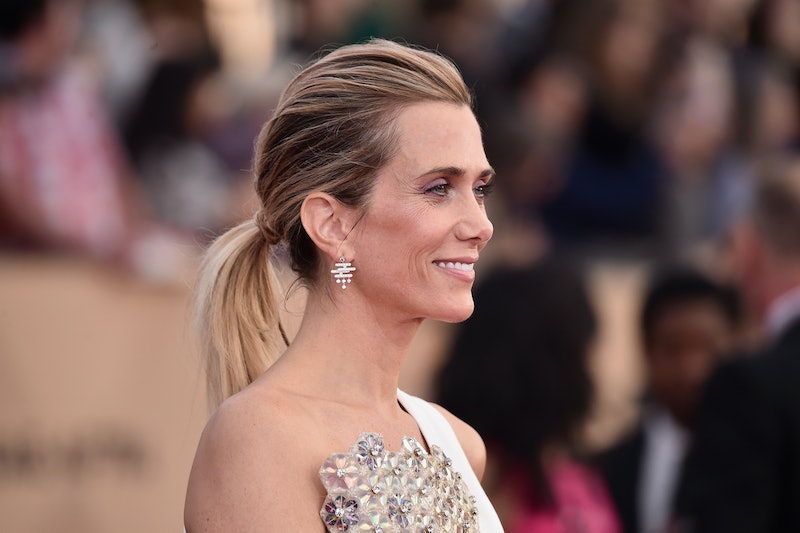 The state of Georgia has attracted a lot of business from Hollywood in recent years for film and TV production. However, after the incredibly restrictive "heartbeat bill" was signed into law earlier this month, many members of the entertainment industry have threatened to boycott the southern state. Now, Kristen Wiig's new movie has pulled out filming in Georgia, her rep confirmed toVariety on May 21. In response, plenty of other stars are proving that they've got her back.

In April, news broke that Wiig would be re-joining her Bridesmaids creative partner, Annie Mumolo, for a new comedy titled, Barb and Star Go To Vista Del Mar. Their work together on Bridesmaids earned them an Oscar nomination in the Best Original Screenplay category back in 2012, so there's a pretty good chance that Barb and Star will end up being a hit, too.

Georgia won't be enjoying any of the fruits of that labor, though, thanks to the anti-abortion bill that Governor Brian Kemp signed into law on May 7. Also known as the "heartbeat bill," the law would prevent pregnant women from getting an abortion after six weeks, which is the earliest a fetus' heartbeat can be detected, Time explained.

As for why the law is sparking so much concern and outrage, many women don't even know that they're pregnant until after that point in time. It essentially takes away her right to choose whether or not to go through with the pregnancy.

Even though the law won't go into effect until January 2020, Hollywood has already begun to boycott the state. The first big name to pull out of filming there was director Reed Morano, who announced that her new Amazon Series, The Power, wouldn't be funneling any funds into Georgia at all, whatsoever.

"We had no problem stopping the entire process instantly," Morano told Time in regards to scouting preparations that had already been in progress for several months prior to the abortion ban. "There is no way we would ever bring our money to that state by shooting there."

Wiig's decision to follow suit with Barb and Star was announced shortly thereafter, and now, several other celebrities are applauding the fact that she's taken a stand. Jessica Chastain retweeted a headline about Wiig pulling her film from Georgia and wrote, "This is how you do it. Please men, follow her lead." Alyssa Milano recently retweeted a similar headline and added, "Kristen Wiig New Movie Pulls Out of Georgia because of the heartbeat bill."

In addition to Chastain and Milano, plenty of other people on Twitter have had Wiig's back and supported the move.

While multiple stars have threatened to pull their projects from the state if the law actually ends up going to effect, Morano and Wiig's moves send an admirable and very clear message. It wouldn't be surprising if this is just the beginning of the Hollywood domino effect in Georgia, so perhaps it will end up causing lawmakers in the state to rethink their position. If they're not willing to concede, though, they might want to go ahead and prepare to lose a pretty big stream of revenue.

More like this
Lin-Manuel Miranda & Tituss Burgess React To 'Little Mermaid' Casting Backlash
By Radhika Menon
An Extremely Messy Ranking Of What Actually Happens In 'Don't Worry Darling'
By Chloe Foussianes
Paul Mescal, Man Of Mystery
By Samantha Leach and Heather Hazzan
Florence Pugh Reflected On Her ‘Don’t Worry Darling’ Experience On Opening Day
By Brad Witter
Get Even More From Bustle — Sign Up For The Newsletter