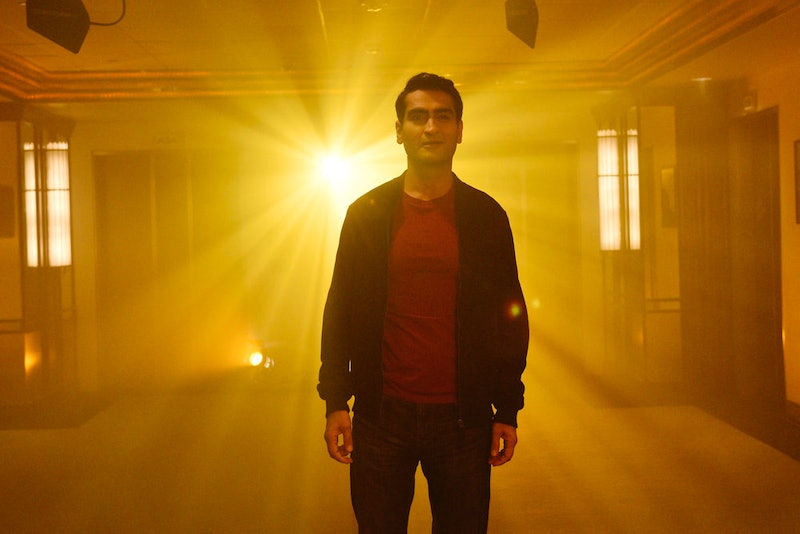 Comedian and actor Kumail Nanjani's film The Big Sick was a big, surprise hit this summer. The movie was inspired by the true story of his and his real-life wife's Emily V. Gordon's early courtship, including the culture clash of their families. The actor hosted Saturday Night Live on Oct. 14 and Kumail Nanjani's SNL monologue talked about the racism he dealt with after the film's release and Islamophobia in the United States. Nanjani grew up in Pakistan, was raised as a Shia Muslim, and came to the U.S. at age 18 to attend college, according to AV Club. This is his first time hosting the NBC sketch comedy series.

Nanjani explained how he is the "second person in my family to leave Pakistan." The Big Sick is about the interracial relationship between himself and Gordon, who is white. "I came to American, fell in love with a white woman and made a movie about it," he said in his monologue, before detailing the racist reviews he received. Nanjani said some of the reviewers disliked the film's "race-mixing" — in a film about an interracial relationship. "First of all, nobody good ever uses the phrase 'race-mixing," he remarked. "Even if someone was like, 'I'm pro-race-mixing,' I'd be like, 'Why are you talking like that?'"

His monologue also detailed his negative Twitter mentions about The Big Sick that dealt with his race. "A lot of people were like, 'Go back to India,'" he told the audience. "I've never been to India. Are you just hoping I'll have an awesome vacation soon?" Nanjani told the audience that it's remarks like that bug him the most. "My problem with most racism is the inaccuracy," he said. He continued:

"An informed racist is a better racist," he concluded in the monologue. "Just because you're racist, doesn't mean you need to be ignorant." Of course, racism of any kind is not be acceptable, but Nanjani has a major point about being informed. All people should strive to be fully informed about the world and its issues before making any snap judgments about race and religion.

Nanjani's SNL monologue also touched upon Islamophobia and he compared it to an unexpected TV series. "Islamophobia is on the rise. It’s like Will & Grace,” Nanjiani joked, playfully. “It was huge awhile ago, we thought it was gone and done forever and now it’s back and bigger than ever. Thursdays on NBC — they made me say that.” He also mentioned a moment in which someone made a uninformed quip about Muslims. This further made his point about some people not being informed about race and religion, yet making judgments. "I saw a guy be like, 'Of course all Muslims are sexist; the Quran says all women can't drive," Nanjani said in his monologue. "Pretty sure the Quran never said that." Nanjani went onto explain that the Muslim text was written 1,400 years ago — and thus would have predicted the invention of cars.

Nanjani's SNL monologue was super insightful about the racism and Islamophobia he has experienced, even after the release of his critically-acclaimed film The Big Sick. Watch his monologue in the video below and see it for yourself.

His funny and perceptive monologue was an exceptional SNL debut as a host and you should definitely watch it ASAP.