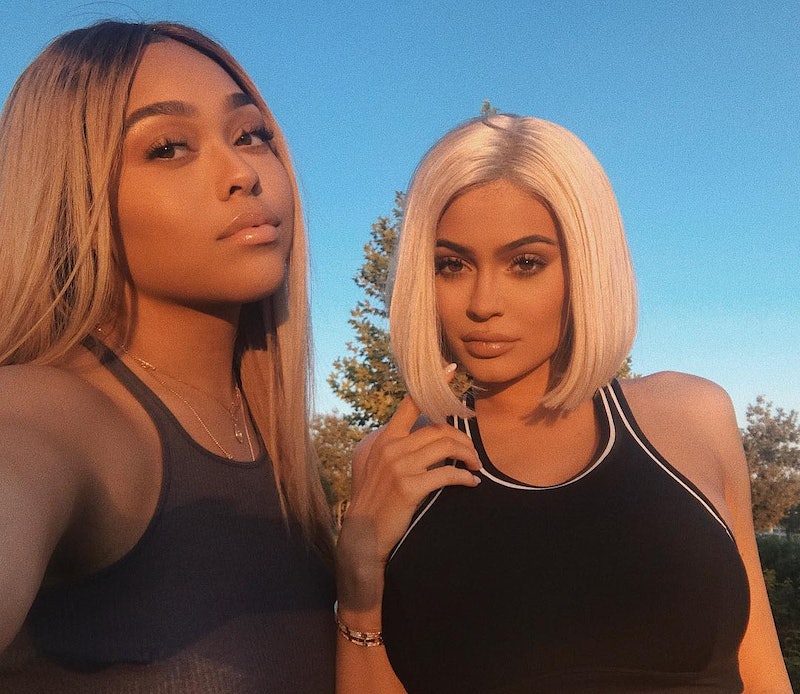 If you're a fan of Kylie Jenner, there's a good chance you know who Jordyn Woods is. The model is the best friend of the Kylie Cosmetics creator, and based on social media, they're practically inseparable. It makes total sense that a Kylie Cosmetics' Jordyn Woods lip kit would finally be coming from the brand. After all, Jenner has worked with sisters Kim, Khloe, and Kourtney Kardashian as well as mom Kris. Now, it's Woods' turn.

If you're not familiar with the model, she worked with successful plus size for fashion brands like ASOS and is a frequent part of Jenner's social media presence. Plus, she was included in Jenner's baby Stormi announcement video with Woods revealing that she was actually with Jenner when she took her pregnancy test. Clearly, these two are have a serious bond. Now, they share a lip kit.

According to Jenner's Instagram account, she's launching four new lip kit shades with her Kylie Cosmetics brand. Two of them are actually relaunching of former shades in older collections (Red Velvet and All Nighter), but two are brand new, and one of them is named Jordy after Woods. The same is a gorgeous cool red shade that is actually in Jenner's velvet formula, not her classic matte.

Woods isn't alone in getting her own lip kit, though. A few days ago, Jenner announced that another close friends of hers would also be getting her own shade. The Kylie Cosmetics founder is close with her assistant Victoria Villarroel, who is also featured in her baby announcement video and was also present when Jenner discovered she was pregnant. Jenner also helped Villarroel get engaged back in 2016. Clearly, this is a friendship and not just an employer and employee relationship.

As for Villarroel's shade, it's also a gorgeous cool red, and Jenner even mentions in her Instagram story that it's a sister shade to Woods' lippie. However, unlike Woods' Jordy, Villarroel's Victoria lip kit is a classic Kylie Cosmetics matte formula.

As for when you'll be able to snag the new Jordyn Woods inspired lip kit and the Villarroel lippies, they'll be coming to the Kylie Cosmetics website on June 1 at 3pm PT. If cool toned reds are your jam, you're in luck. Not only do you not have long to wait to shop the new kits, but with such similiar colors, you can practically pick which formula is right for you: velvet or matte.

While Woods nor Villarroel created a collection with Jenner, her brand is still known for honoring her friends and family with its lipstick names. Like her best friend and her assistant, Jenner's grandmother Mary Jo has a shade named after her. While sister Khloe Kardashian does have collections with the brand, KoKo K also seems to be named after her as well. Then, of course, there's the shade named for her niece Penelope Disick. Plus, her own daughter Stormi has an entire Weather Collection inspired by her. Clearly, Jenner's brand is deeply personal and as such, so are her shade names.

As for the price of the lip kits, they clearly won't change from the current prices listed on the brand's website. As of press time, matte lip kits retail for $29 and velvet lip kits cost $27.

If you want to celebrate Kylie Jenner and Jordyn Woods' friendship by purchasing the new Jordy lip kit, it'll be up for grabs super soon. Hey, why not even grab one for your own bestie? Mark your calendar for June 1 if you want to shop yet another expansion of Jenner's ever growing cosmetics empire.