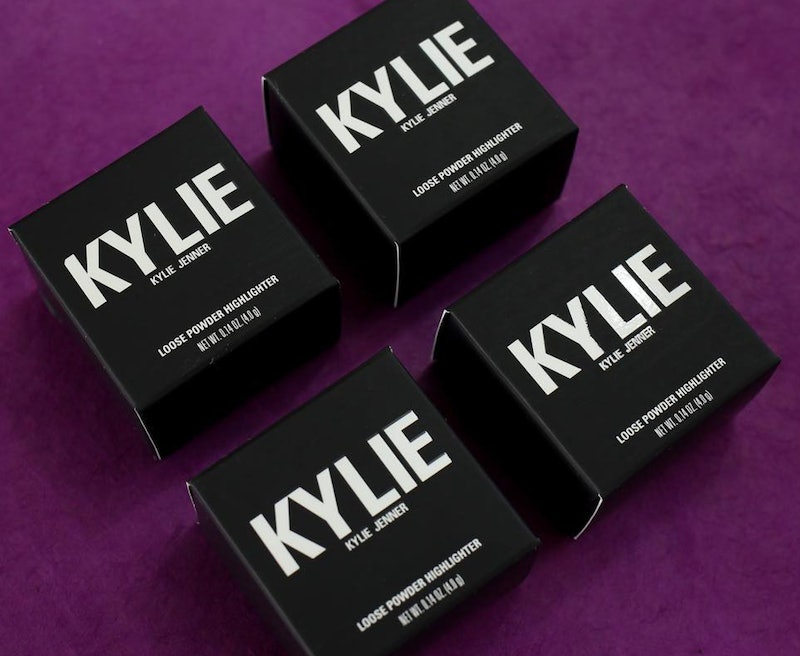 Leave it to Kylie Cosmetics to resurrect a "retired" product with a twist. Actually, make that several twists. Kylie Cosmetics is bringing back the previously limited edition Ultra Glow Loose Powder Highlighters, which were initially introduced as part of her Vacation 2017 Edition this past summer. The Ultra Glows are now a part of the brand's permanent collection and that's certainly cause for celebration — especially for makeupistas looking to shimmer and shine all year long.

We realize that it's tempting for Kylie-philes to be slightly annoyed about the fact that products once promoted as limited edition are having an encore. That prior short-term status may have lead to a shopping frenzy, with customers quickly scooping up (several of) these highlighters due to fear of them selling out or not being restocked and available again.

But the Ultra Glows are back with thrilling new elements.

The loose highlighters now come in matte black packaging, which is also new for the brand's Fall 2017 launches, including the new Lip Kits in autumnal shades and the Purple Palette.

There's also a brand new Ultra Glow shade. It's a celestial lavender, dubbed "Wisteria." It's a winner that is likely to sell out as soon as it hits the digital shelves.

The Ultra Glows return to the brand's website, which is also its sales platform, on Friday, Oct. 6. While summer has long since faded into the rearview, you can continue to rock a sun-kissed glow through the fall and deep into the doldrums of winter, courtesy of the UGs.

Can someone say "Purple Haze?!" Welcome to the Kylie Cosmetics family, Wisteria.

While the other Ultra Glows — Fiji, Santorini, and Tahiti — were named after exotic, tropical locales and were more golden in tone, Wisteria is super unique, thanks to that soft, pale purple hue. Serious shimmer plus a pretty pigment is always a winning combo.

Here's how to rock Wisteria on an actual face. Grab a big, fluffy brush and sweep the product onto your cheeks or other high points of your face. You will emit a gorgeous, ethereal, utterly angelic glow. You can also use a small shadow brush to dab Wisteria on your Cupid's Bow, along the brows, and in the inner corners of your eyes from some additional shine.

For visual reference, this is what the Ultra Glows looked like when they debuted via Kylie Jenner's Snapchat and in the Vacation Collection packaging.

Here's another flashback to the Ultra Glow jars. The font and the overall presentation had such a "vintage" vibe.

Jenner premiered the Ultra Glow hues under the hot summer sun. Dat glow was lit enough to communicate with the satellites.

It's entirely possible that the brand always intended to make the Ultra Glows a permanent part of the repertoire. Perhaps Kylie and ko. wanted to see how customers responded to them before bringing them back for good.

Jenner and her multi-million dollar makeup brand are all about the purple tones this fall. The mogul also revealed the much-anticipated Purple Palette, which mixes dark and light purples, pinks, and more.

The new lineup of mega matte and ultra-pigmented Lip Kits is so fall-ready. The Lip Kit is unquestionably the brand's hero product which launched the brand into stardom.

The KLKs are still going strong and the color offerings continue to expand.

The Fall 2017 Lip Kits come in a variety of neutral and gold tones. That purple, though.

You can watch this nearly eight-minute Purple Palette tutorial on YouTube. The Fall 2017 Kylie Cosmetics launches allow you to totally refresh and refurbish your makeup wardrobe. There's something for every feature, kourtesy of Kylie.