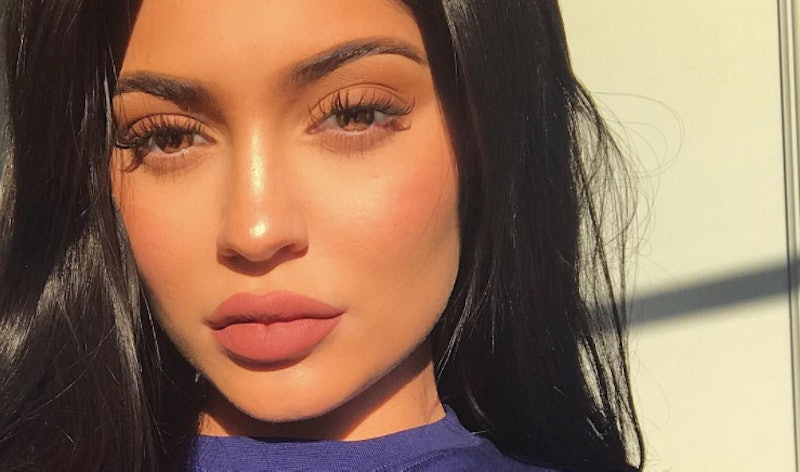 Is Kylie Cosmetics trying to take on Fenty Beauty's holiday collection? It sure seems like it with Kylie Jenner's most recent Snapchat story. On Wednesday, Jenner shared a few videos on her story showcasing a two new products, one of which was the Kylie Cosmetics Wet Set Highlighter Palette, which looks amazing.

In her video of the Wet Set Highlighter Palette, Jenner shows off the blueish-purple iridescent shades on her fingers, and they look absolutely gorgeous. They appear to be super pigmented and smooth, like they would melt wonderfully on your skin for a top notch strobe effect. According to the snap, the Wet Set Highlighter Palette is "one of [Kylie's] favorite things [she's] ever created."

In the snap story, Jenner also previewed a different highlighter — one that is a shimmery loose powder. While showing off the Ultra Glow Loose Powder Highlighter and its various shades, Jenner applies one shimmery shade to her sculpted cheekbones, saying, "this stuff is magic."

The Ultra Glow Loose Powder Highlighters are already available on Kyliecosmetics.com. It comes in four different shades, a rose gold, a lavender, a gold, and a champagne color, and costs $14. On the other hand, Jenner has not yet announced when she will release the Wet Set Highlighter Palette, but she has the tendency to preview her products a few days to a week before they're available on her site, so it's probably coming soon.

It kind of seems like Jenner is sharing her highlighters this week as a way to compete with Fenty Beauty's new holiday collection, which comes out on Friday, Oct. 13. Rihanna's beauty line received tons of attention last month when it launched, and at that point it only consisted of foundation, one lip gloss, a primer, and two different kinds of highlighters, all of which were an instant hit. Two weeks after the initial launch, Rihanna announced that her holiday collection would include an eyeshadow palette, lipsticks, lip glosses, and liquid eyeliners, a clear affront to Jenner's lipstick/lip gloss throne.

Perhaps Jenner isn't trying to compete with Rihanna (although it's kind of fun to think that these two A-list celebs are subtly jealous of each other's makeup endeavors), but rather is trying to fill a hole in her product offering, especially since she is known for out-of-the-box shades, and these iridescent highlighters definitely fit the build.

It's also very possible that the Kylie Cosmetics Wet Set Highlighter Palette has been in the works for a while, like back when the unicorn beauty trend was at its peak, and they are just now being released to the public.

In the mean time, if you're anxious to get your hands on a similar iridescent highlighter, there are a few fun ones you could try before Jenner's Wet Set Highlighter Palette hits shelves.

You'll truly shine with this colorful highlighter pressed powder. While it's not a wet, creamy formula, this powder will give you just the right amount of shimmer.

This iridescent highlighter stick is super dreamy, and really quite trippy, but in the best way possible.

Naturally, Fenty Beauty has a superb option if you want to get that iridescent highlighter look. The Match Stix Shimmer Skinstick in platinum lilac (shown above) and iridescent opal are a fun way to add a little color and holographic shimmer to your cheekbones.