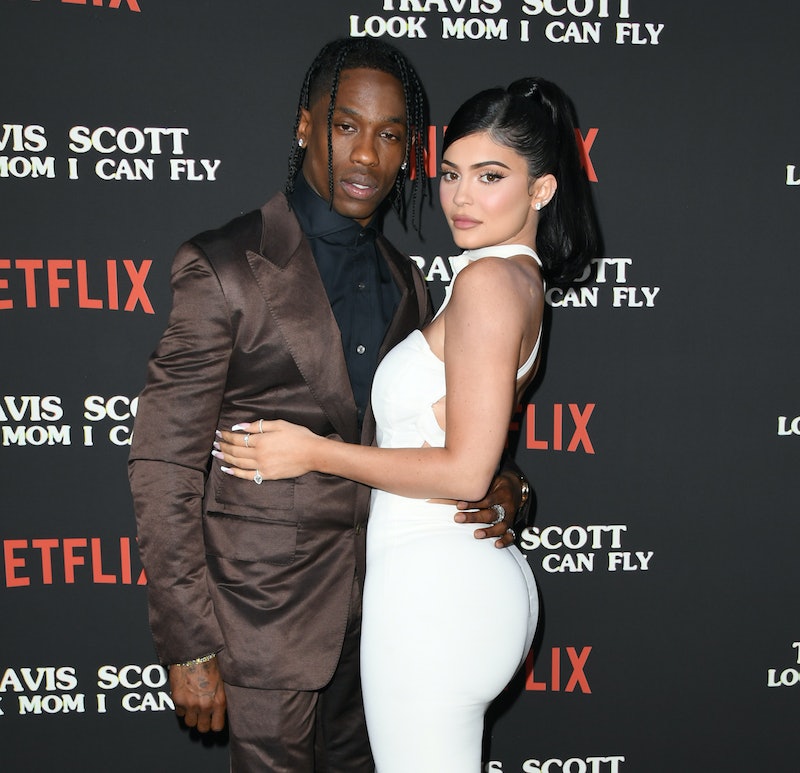 Kylie Jenner and Travis Scott are best friends, co-parents and party dates, but they're definitely not a couple — at least not right now. After the pair attended the Vanity Fair Oscar party, a source told E! News that Kylie Jenner and Travis Scott are "in love" but not back together, despite remaining close in the months since their October breakup. Both the makeup mogul and the rapper have emphasized their commitment to maintaining a good relationship for the sake of their daughter, Stormi, but according to the source, they aren't going to rekindle their romance.

"They spent time together at the Vanity Fair after-party, while also hanging out with Jenner’s family," the source told E! about their date night. "Kylie and Travis truly enjoy one another and are in love, but it can often be hard navigating their lives at such a young age. [They] needed to take a step back to reevaluate many things, but in doing so they are better now than ever."

Jenner and Scott met at Coachella in April 2017, and after a whirlwind romance, they welcomed their daughter in February 2018. During their relationship, the pair were open about their tight friendship, and that closeness has resulted in a great deal of confusion over their relationship status in recent months. In early October, TMZ reported that Jenner and Scott were "taking some time apart," and both responded to the reports by stating their commitment to their "friendship" and to Stormi.

"Focusing on life, music, family at this moment is what's real," Scott wrote on his Instagram Story at the time, while Jenner revealed on Twitter that their split was amicable. "Travis and i are on great terms and our main focus right now is Stormi," she wrote. "Our friendship and our daughter is priority."

A few months later, Jenner's older sister, Kim Kardashian, told Ellen DeGeneres that even she was confused about whether or not the pair had reunited or if they were just close friends. "I honestly don’t know [if they're together], but I think that they are just really close friends and co-parenting amazingly," Kardashian said on The Ellen DeGeneres Show in December, though she added that they were "definitely not" engaged. "I don’t know the status if they’re together or not. I don’t think they are."

Later that month, Scott told XXL that he has "been spending time with my family and with my daughter, Stormi," around the holidays, and shared his affection for Jenner. "I love [my daughter's] mommy and I always will," he told the magazine, before hinting at the reason that he and Jenner had split. "The hard part about relationships is just trying to be in one without a million outside voices interfering."

Jenner echoed their commitment to their daughter in a recent interview with Harper's Bazaar, where she revealed that she and Scott are "best friends." She continued, "We have such a great relationship. ... We both love Stormi and want what's best for her. We stay connected and coordinated."

What that means for their future relationship status is anybody's guess.