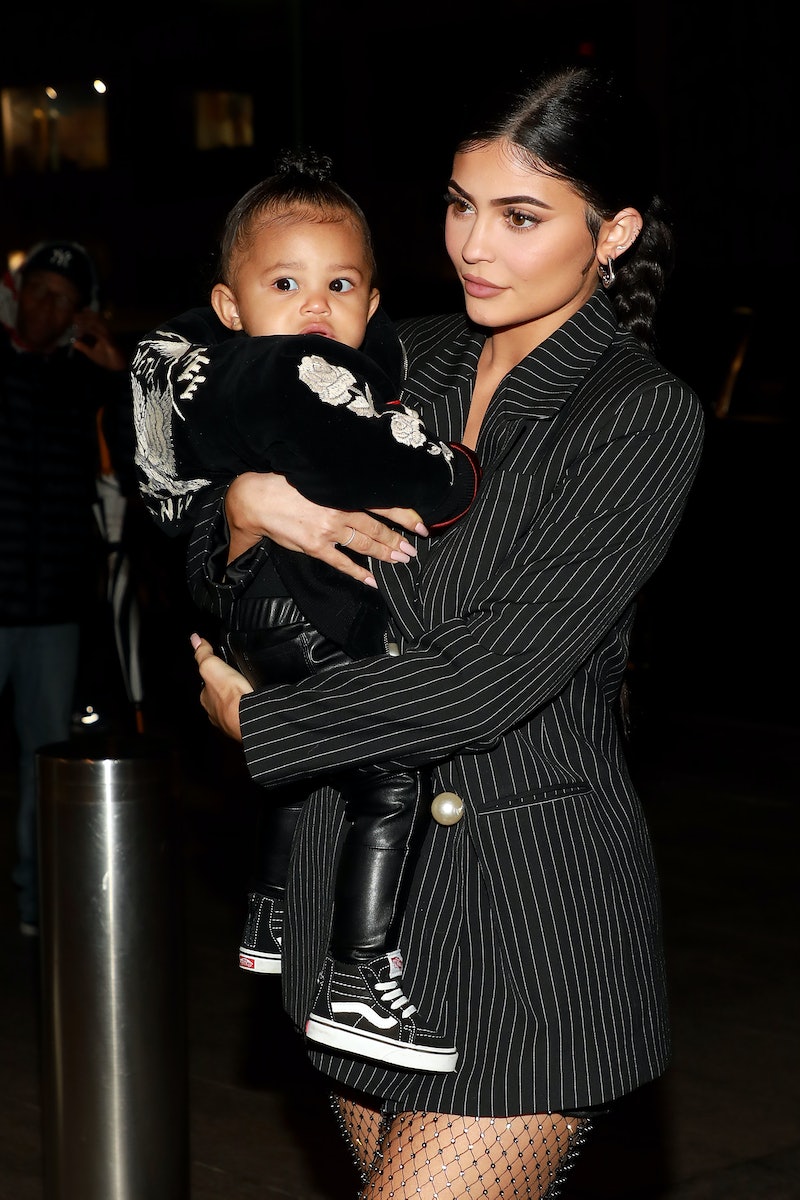 They grow up so fast. Stormi Webster turned 2-years-old on Saturday, February 1, and Kylie Jenner's birthday tribute to Stormi on Instagram makes it clear just how much the makeup mogul loves being a mother. The youngest Jenner sister shared a series of photos from Stormi's two years of life — including snaps of Jenner holding her newborn daughter — as well as some adorable family videos featuring Travis Scott.

"And just like that she’s two," Jenner captioned her Instagram post, along with some very appropriate, weather-themed emojis. "Happy birthday to my Stormi," she continued, adding that "February 1st [at] 4:43pm [is] the moment my life changed forever. We were meant for each other stormiloo." Her slideshow underlined Jenner's connection to her daughter as well, with a video that showed the reality star getting Stormi's name tattooed on the back of her arm, while then-boyfriend Scott looks on approvingly.

Jenner's tribute to her daughter isn't the only way she'll be celebrating Stormi's big day; on Jan. 31, she showed off a pile of presents waiting for Stormi to open on her birthday, along with a plate of pale pink cupcakes. "I can't wait for my baby to wake up in the AM," Jenner captioned the photo, which featured wrapped boxes and a bright pink toy car with a large bow on the front.

Of course, the celebrations aren't just restricted to family, as the Kylie Cosmetics Stormi collection officially launches on Feb 1., to celebrate the toddler's second birthday. "I think I’ve been waiting for this moment since the day I found out I was pregnant," Jenner wrote on Instagram on Jan. 17, alongside a teaser clip for the collection. "An entire collection by @kyliecosmetics dedicated to my beautiful daughter ... You will fall in love." The butterfly-themed collection features several nods to Stormi, including an eye shadow shade named "4:43" to represent the time Jenner gave birth.

Jenner has often spoken about how her life "changed" in that moment two years ago, even telling big sister Kendall in a 2018 interview for Vogue Australia that becoming a mother helped her love herself more. "I used to live each day as it came, and now I look at the future more," Jenner said. "I actually feel like I love myself more after I had Stormi. And I’m trying to be … I mean, I’m already a positive person, but just having fun, being positive."

In March 2019, Jenner told Interview magazine that she feels like her life "didn't start" until she gave birth to Stormi. "I always knew I was ready [to be a mother] but you don’t know what that love and that feeling is like until after you have a child," she explained. "She has changed my life for the better. The way that I look at things is a lot more positive and I really feel like my life didn’t start until I had her."

Based on everything she's said about her baby girl — and how she "changed" Jenner's life the day she was born — it's no wonder Jenner wants to celebrate Stormi's birthday with as much love as possible.