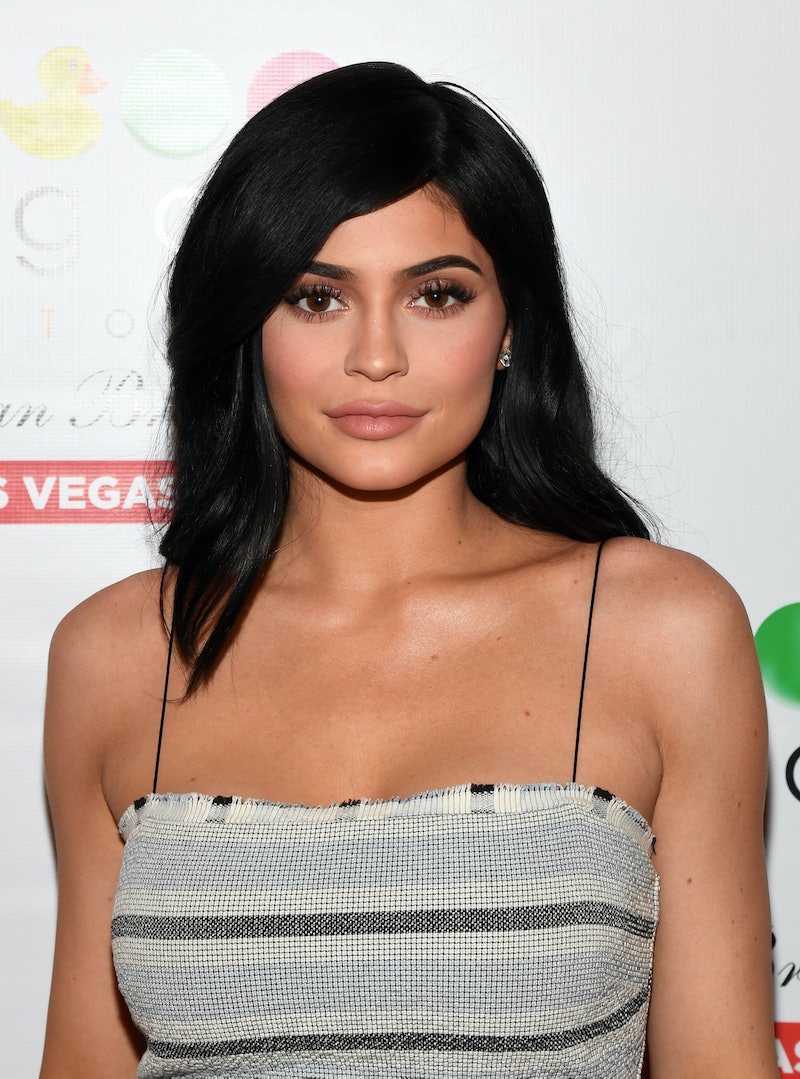 When it comes to Kylie Jenner, one of the first things people think of when her name pops up is "beauty mogul." But Jenner didn't create her empire on a whim. When explaining the inspiration behind Kylie Jenner's lip kits, Jenner revealed that the trigger behind the makeup line came from a very personal place. It wasn't simply a job that Jenner fell into.

Jenner is only 20 years old and has already created a company that is on track to making a billion dollars. Just last year alone Kylie Cosmetics saw a 25% increase in sales, and is on its way to become worth more than $1 billion by 2022. To put into perspective just how mind-boggling of a feat that is, WWD pointed out that it took Lancôme 80 years to hit the $1 billion mark. But Jenner will hit that in just a mere six years.

So she is clearly onto something with her varying lip kits and eyeshadow palettes, but in a recent interview with Evening Standard Magazine, she shared where she got the inspiration for lip kits in the first place, and why she wanted to make them the central focus of her business model.

The answer was surprisingly relatable and put into focus something that a lot of us tend to forget: Jenner was just a teen when she set up her business, and was followed by all those insecurities and self-esteem blows that come part and parcel during that tricky age.

Kim Kardashian interviewed her for the magazine, and one of the questions she asked was why did Kylie Cosmetics become such an instant success. The answer back was honest, where Jenner shared she dove into makeup because it made her feel better about her insecurities, and since it connected so deeply to her own feelings, and she was so passionate about it, that fans just immediately clicked with it. It felt authentic.

"It came from an insecurity and I turned it into something," Jenner shared. "I was insecure about my lips, and lipstick is what helped me feel confident. And I feel like people could see that it’s authentic to me, and it was organic, and it just worked!"

Jenner has publicly confirmed that she had been getting her lips filled since 2015, and in 2017, during an episode of her spin-off series Life of Kylie, she shared the reason why she got them plumped in the first place. Back when she was 15 she had one of her first kisses, and when the boy pulled away he told her that he thought she would be a bad kisser because she had such small lips. It was said offhandedly, but that comment really hurt Jenner and made her feel even more insecure about her appearance. So she decided to take matters into her own hands and change it.

“Just when a guy you like says that, I don’t know, it just really affected me. I just didn’t feel desirable or pretty. I really wanted bigger lips. I would overline my lips with lip liner just to create the illusion of bigger lips. And then finally I was like this lip liner isn’t doing it. [I] ended up getting my lips done,” she shared.

Curious if her sister would want to engage in any other procedures, Kardashian asked how Jenner felt about plastic surgery in general. Her answer was without judgement. "I feel like if it makes you feel better, and if that’s what you want to do, I’m not against it, she shared. Though she added that right now she's happy with how she looks like. "Right now I probably wouldn’t do anything, actually."

Seeing how Kylie Cosmetics dominates new headlines just about every month, it's pretty cool to know the underlying inspiration behind one of the biggest makeup brands in the industry — and to be reminded that everyone has insecurities, no matter how beautiful or rich they are.