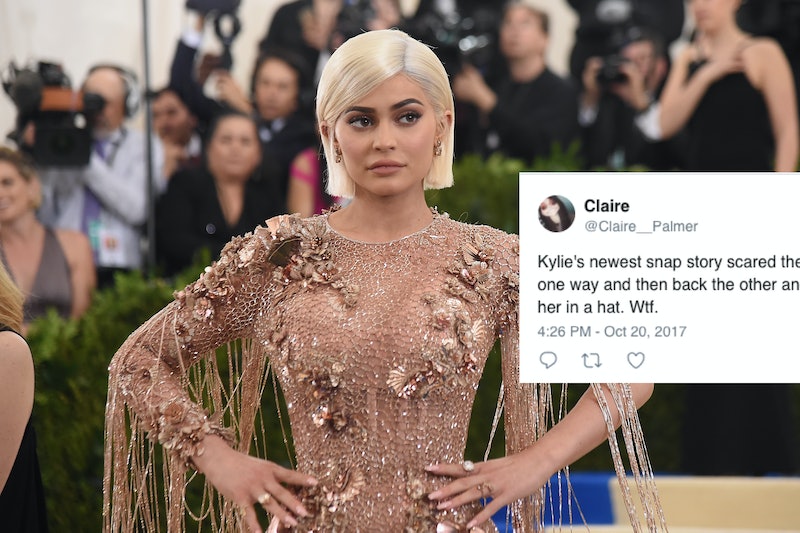 Last week, matte lipstick innovator and shrimp taco enthusiast Kylie Jenner posted something on Snapchat that left fans asking a serious and important question, and no, the question doesn’t have anything to do with all of the yet-to-be-confirmed pregnancy rumors. The inquiry: Was Freddy Krueger in Kylie Jenner's Snapchat that was filmed in her purse closet the other day? No, "Freddy Krueger" is not the name of her one of her many dogs. (Or hey, maybe it is? Keeping up with Keeping up with the Kardashians is one thing; keeping up with the Kardashian-Jenner menagerie is entirely different animal.) This is a Springwood Slasher silhouette similarity situation.

As many people pointed out on Twitter, it sure looked like Freddy Krueger of Nightmare on Elm Street fame was lurking behind the Life of Kylie star in one of her recent stories. And if it wasn't Freddy, could it be some other iconic pop culture character who wears a similar chapeau? Or is it a mirror ghost? Or all of the above?

In the snap, Jenner stands in the doorway of a completely empty pocketbook storage room and scans what could very well be the most mirrored closet in the history of mirrored closets. When she pans back to her reflection, a figure appears behind her. And the figure is wearing a wide-brimmed hat. And the figure’s face is impossible to make out. And the figure really seemed to show up out of no where. The Snapchat story goes from your average post about a super rich person’s super fancy closet that's specifically for super fancy purses to a spooky post about a possible Krueger situation like *that.*

But before the theories could get too out of hand (and yes, that hand is sheathed in a knife glove), Jenner revealed the identity of the hat-wearing Snapchat story mystery person: He’s one of Jenner’s longtime pals, Harry Hudson. On Friday, she quote-tweeted someone else’s question about the Snapchat story, writing, “you guys it’s @harryhudson.” The guy in the hat is a Snapchatter, musician, and cancer survivor. He released his debut single "Cry For Love" last week and he is most certainly is not Freddy Krueger.

Before Jenner confirmed Hudson was the individual looking over her shoulder, people speculated. And the speculation was something to behold and cherish. Nay, kherish.

You most kertainly weren't the only person who was spooked by this snap.

Krueger Was One Of The More Popular Theories

One, Two, Freddy's Coming For You

Watch out for that brim.

More Than One Wondered If It Was A Shadow Person

Well, this sure took a turn for the kreepypasta.

Some Thought It Was The Undertaker

NBD, just one of the greatest wrestlers of all time rolling into her Snapchat like he rolled off of that table at WrestleMania 32.

And If It Was Taker?

It'd be like a Tombstone Piledriver right to the heart. And that's a good thing.

Or, You Know, It Could've Been A Ghoul

It Could've Been The Phantom Of The Op-Purse-ra

It Could've Been The Ghost Of Purse-mas Past

But that isn't Freddy Krueger, Kung Lao, the Undertaker, a Shadow Person, or a ghost in Jenner's purse closet.

There you have it. Case closed.

More like this
Kylie Jenner Goes Into Labor & Welcomes Her Baby On 'The Kardashians'
By Jake Viswanath
Confusion Reigns After Kanye Changes His Instagram Profile Pic To Kris Jenner
By Jake Viswanath
The Try Guys Cheating Scandal, Explained
By Grace Wehniainen
The Real Reason Russell Brand Decided To Quit YouTube
By Sam Ramsden
Get Even More From Bustle — Sign Up For The Newsletter