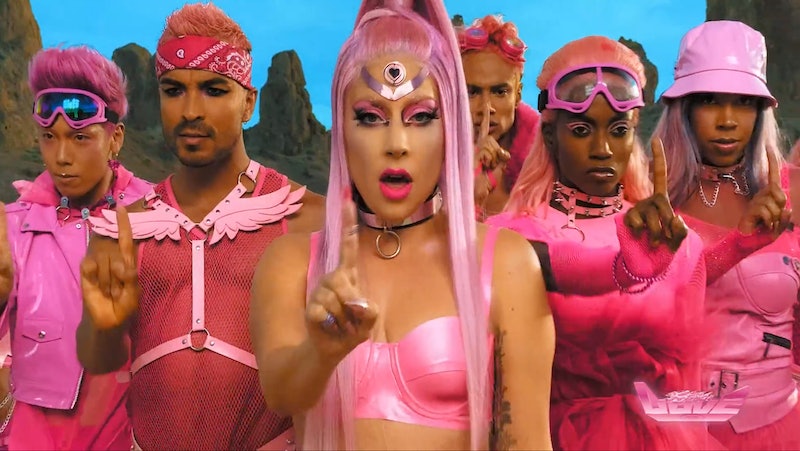 Lady Gaga is back with a new single — and a plot to save the universe with the power of pop music. On Friday, Feb. 28, the singer released a futuristic new clip to go with her highly-anticipated single, and Lady Gaga's "Stupid Love" video is basically Power Rangers with a dash of Sailor Moon and Ariana Grande's "Break Free" music video. In the clip, Gaga plays the leader of a tribe called the "Kindness Punks," who fighting in a post-apocalyptic desert for justice and peace.

"The world rots in conflict," reads a title card at the start of the video. "Many tribes battle for dominance. While the Spiritual ones pray and sleep for peace, the Kindness Punks fight for Chromatica." (According to Little Monsters, Chromatica is likely the title of Gaga's next album.) Along with the album title, the video sets up a color-centric theme for Gaga's next record, as she and the Kindness Punks rock an all-pink ensemble in the video, while the other tribes are each wearing their own specific colors — like green and yellow.

Those colored outfits are also part of the reason that Little Monsters and viewers have been comparing Gaga's video to the Power Rangers — another iconic group that fought to save a "world of conflict" while wearing color-specific outfits. But of course, the Power Rangers aren't the only iconic pop culture property that Little Monsters found comparisons to in "Stupid Love."

Little Monsters aren't the only ones who noticed the similarities between "Stupid Love" and the iconic '90s television series. The official Power Rangers Twitter account even tweeted about Gaga's new video, proclaiming that the Mighty Morphin' Power Rangers theme song — specifically, the lyrics "Go Go, Power Rangers" — has officially been replaced by "Gaga Power Rangers."

The singer's futuristic pink costume, complete with a cutout above the cleavage, a face mask and strong shoulders didn't just remind people of the Power Rangers, but also the villains they faced, specifically Divatox. Divatox was the main antagonist in the 1997 series Power Rangers: Turbo, and was an "Intergalactic Pirate Queen of Evil" who fought for power and fame. The Power Rangers account also referenced Gaga's villain-reminiscent outfit in a tweet, noting that they were "not sure if we should fight this monster or stan this monster," but ultimately "decided to stan" after consulting Zordon.

In addition to the strong Power Rangers vibe in Gaga's video, many fans pointed out that her costume — specifically her headpiece and the powerful dot on her forehead — was remarkably similar to the crown that Sailor Moon wears in the cartoon.

Before Gaga and the Kindness Punks took on a chaotic universe in "Stupid Love," Ariana Grande rocked a "space princess" vibe of her own in the music video for "Break Free." Like Gaga, Grande rocks an all-pink futuristic outfit and a high ponytail in the video, fights in a deserted space landscape and teams up with a group of fashionably-dressed prisoners to bring peace back to the planet.

With all of its iconic '90s TV and anime references, "Stupid Love" makes it very clear that it's Lady Gaga's universe, and Little Monsters everywhere are just living in it.