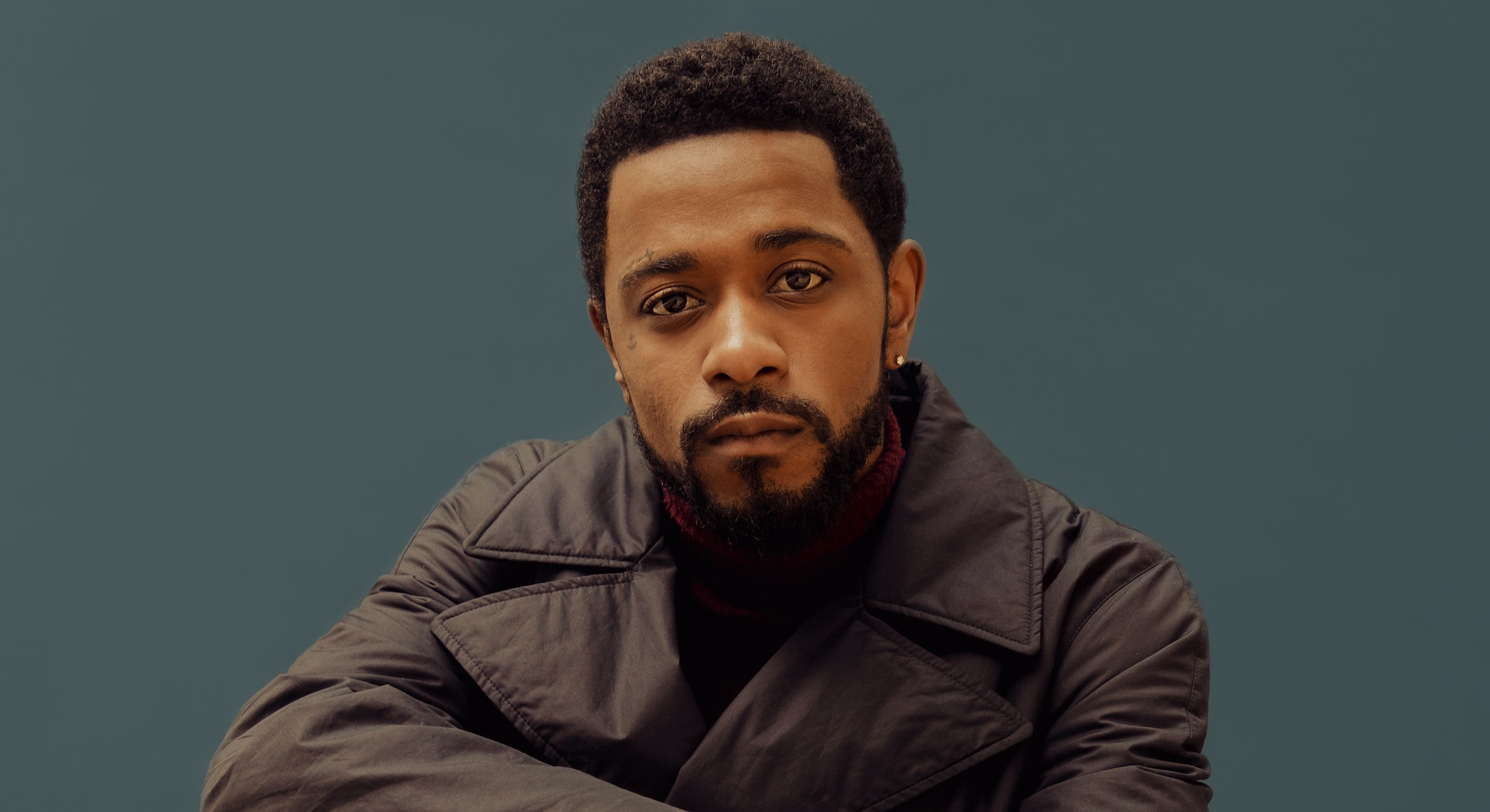 It’s the morning after the New York City premiere of writer-director Stella Meghie’s new film The Photograph, and Lakeith Stanfield is feeling the heat. When he enters our chilly photo studio with his team in tow, he’s holding a handheld electric fan to his face. Is this a new accessory to complement his heightened celebrity status?

Not exactly. He’s just trying to stay cool under the fluorescence. “Being in front of these lights and stuff, it’s like torture,” he says. In person, Stanfield is relaxed and remarkably introspective. He even seems a little shy, carrying with him a translucent crystal similar to the not-so-lucky charm from another film he's in, Uncut Gems. Ever the chameleon, Stanfield presents a different vibe in front of the camera, sauntering across the set in a maroon turtleneck, bright green sneakers, dark pants, a black beanie, and a long trench coat (his “security blanket,” he tells the photographer) and shifting from pose to pose with ease. His music suggestions, like Marty Robbins’ “El Paso” and Travis Scott’s “A-Team,” boom through the speakers, offering a rare glimpse into who he really is — or at least who he is on this day.

"I just want to have the truth inside of me realized and not have it be clouded by insecurity, doubt, and illusion, as much as it has been in the past."

“I don't really know if I want to figure it out,” the 28-year-old says of his process of self-discovery, as he continuously lights and relights incense propped on a table between us. (“Do you mind if I do this?” he asks. I say no, it’s actually quite soothing). “I just like to perform and take on different kinds of roles.”

After starring in films like Knives Out, Sorry to Bother You, and Selma, Stanfield has also proven himself as an assured leading man in romantic dramas like The Incredible Jessica James, Someone Great, and now The Photograph. Each role has enabled his process of exploring pieces of himself and his life without having to define exactly who he is at any given time. “I just want to have the truth inside of me realized and not have it be clouded by insecurity, doubt, and illusion as much as it has been in the past,” he says.

“I just love love, deeply. It's the foundation of being a human being... [It’s] the reason why this machine works, how we work together in society.”

In The Photograph, Stanfield plays a journalist fresh out of a relationship who falls for a commitment-phobic arts curator played by Insecure’s Issa Rae. The #BlackLivesMatter era birthed a wave of movies exploring black pain and grief, and Stanfield sees this film as a chance to give viewers an engrossing love story between two complex individuals. “It was an opportunity to show black love without all the dysfunction, trauma, and PTSD that can accompany it. Although those are very real things, it's nice to sometimes get a breather and just be human,” he says.

“I just love love, deeply,” adds the actor, who shares a child with fellow actor Xosha Roquemore. “It's the foundation of being a human being. It’s something that brings us together. [It’s] the reason why this machine works, how we work together in society.”

Growing up without a father around in San Bernardino, California, Stanfield says the strong black women in his family – his mother, aunt, and grandmother — gave him the confidence to pursue a career in acting. Even as a child, he was a natural performer: he’d put on his aunt’s wigs and dance, or create puppet shows to entertain his family.

“The mirror was my best friend,” Stanfield says. “I was always curious about this thing that I was. Whenever I cried or was hurt, I’d go look at myself in the mirror.” Trailblazing black actors like Denzel Washington and Sidney Poitier served as positive male role models whose careers and lives he hoped to emulate. “Not growing up with a dad around, those male figures were powerful in a way [that was] deeply moving.”

But there’s another icon that also inspired him: Marilyn Manson. “He was transformative for me when I was young — from his polarity to his dynamics and shape-shifting,” says Stanfield, who also raps in the group Moors. “His feeling that you can be whatever you want and it's not scary; I define it as being honest.”

Through this time of self-discovery and early artistic experimentation, his aunt was by his side. “The fact that she was even there was a lot for me,” he adds. “She was always like, ‘You’re going to be a star.’” He can’t hide the smile on his face as he recalls the time everyone in his house dressed up with him as characters from one of his favorite films, The Lion King. “I was Simba,” he says. “Because I believed that one day, I too would be king.”

Stanfield’s own shapeshifting, together with a radical vulnerability, make him utterly magnetic, whether he’s acting on screen or rapping on stage. It’s surprising, then, that he’s considering a life out of the spotlight. “Being in front of the camera is cool, but I don't really always like the spotlight on me as much as I might seem,” he laughs. “Because it's not about me. I want to scale back and let the story or music speak for themselves.”