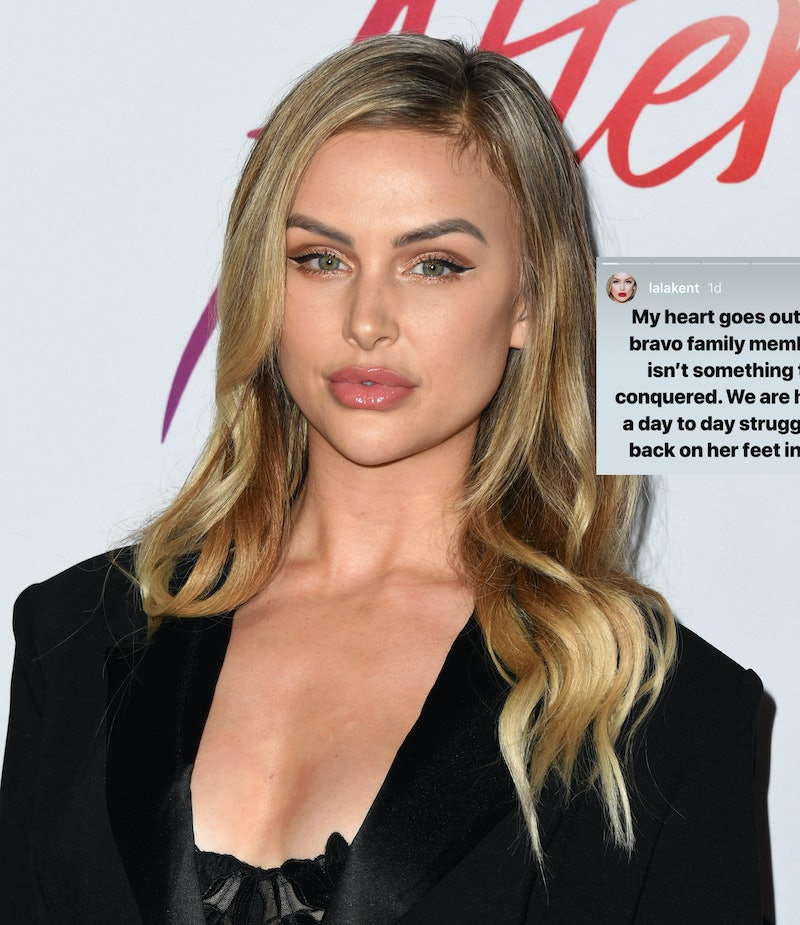 In light of the recent report detailing Luann de Lesseps' alleged probation violation (which stemmed from her December 2017 arrest in Miami), one of her fellow Bravo stars has responded with support. As Us Weekly reported, Vanderpump Rules' Lala Kent addressed Luann's struggles with sobriety with some words of encouragement and a message that puts the reality stars' journeys into perspective.

Lala — who revealed in March that she's struggled with her own sobriety — reacted to the Luann news with a heartfelt note on her Instagram Story. She wrote,

“My heart goes out to my fellow Bravo family member. Sobriety isn’t something that can be conquered. We are human and it is a day to day struggle.”

The Pump Rules star's message is an important one to keep in mind. And since she comes from a place of experience, it's nice to see Lala impart a bit of wisdom on the situation, not only for Luann's sake, but for everyone else's as well.

Lala's message came shortly after People reported on May 23 that Luann was ordered into custody in Palm Beach County in Florida after allegedly violating the terms of her probation. The terms of her probation were originally set months after she was arrested and charged with alleged disorderly intoxication, battery on an officer, resisting arrest with violence, and threatening a public servant on New Year's Eve 2017. In July 2018, Luann pleaded guilty to three charges, per TMZ, and reportedly reached a plea deal.

While the Real Housewives of New York City star was originally placed on probation for one year back in July 2018, following her recent alleged violation, new terms were added to her probation, which will reportedly now end on Aug. 28, per People. But in regards to reports that she would head back to jail following this news, Luann revealed, in a statement to People, "These reports are false.” She continued:

"I’m glad the judge was understanding once made aware of the evidence provided and I was then released. I am now looking forward to completing my remaining few months of probation. I want to put this behind me and move forward with my life.”

(Bustle has also reached out to Luann's rep for additional comment on the news, but did not receive an immediate response.)

As mentioned, the Pump Rules star can relate to Luann's battles with alcohol. After opening up about her struggle via Instagram Story back in March, Lala further reflected on her sobriety journey during the Season 7 Pump Rules reunion. She revealed that after a trip to Disney World in October 2018 with her fiancé, Randall Emmett, and other family members, she decided to embrace a sober lifestyle.

“I went with my family and Rand’s family to Disney World and I was drunk four days straight from morning until night," she said, “I get on the plane. I’m face-chugging out of a bottle, and the next morning I woke up and said, ‘I will never live this way again,’ and I reached out and got help.” On April 22, as she revealed on Instagram, Lala celebrated six months of sobriety.

In an interview with Bustle in April, Lala opened up even more about this new phase in her life. She explained, "I have been struggling with alcohol use for a long time and there were just too many incidences where I was waking up, not remembering, and it was always like me saying, 'I’m not going to drink tomorrow,' but it just kept happening."

The reality star continued to say that she's in an especially positive place at the moment, "So I’ve been sober for six months now and I just feel like there’s no other way for me to do it. I go to meetings, I have a sponsor, I have a case manager, and all of that. I feel amazing."

In Lala's most recent Instagram Story post about Luann's sobriety journey, you can tell that she wishes nothing but the best for her fellow Bravo star. And that is something that reality TV fans everywhere can surely agree with.