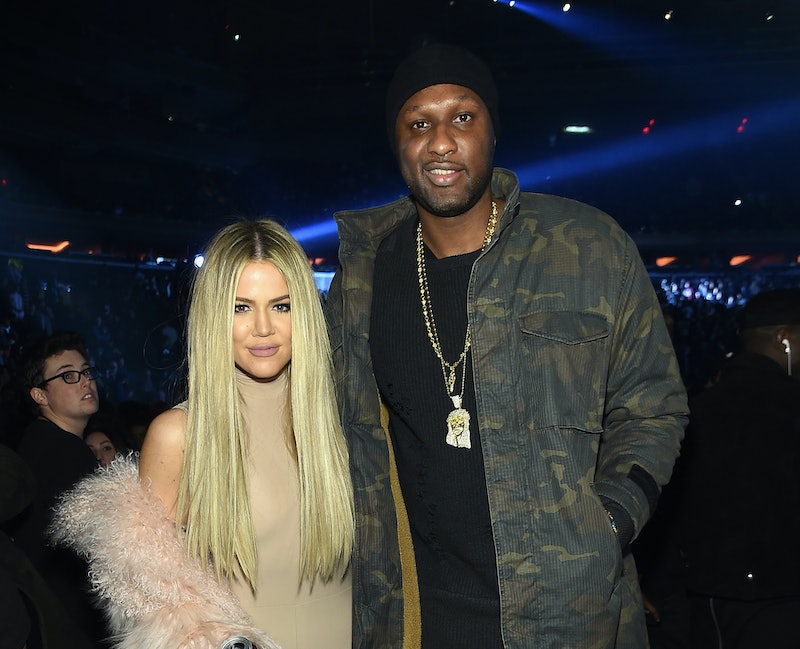 There has been a lot of hype surrounding Lamar Odom's new memoir Darkness to Light. Aside from the content in the book itself, Odom's promotional interviews have been very revealing lately. In fact, Odom responded to the Khloé Kardashian and Tristan Thompson cheating scandals during a recent interview with Entertainment Tonight, reflecting on all that Kardashian has gone through in the past year.

In addition to their basketball careers, cheating rumors are something else that Thompson and Odom, unfortunately, have in common. In his May 28 interview with ET, Lamar remarked, "It's a bad situation" when asked about Kardashian's former relationship with Thompson. He went on to declare,

"She doesn't deserve that. She's a beautiful person from the inside out. You know, [it’s] just a man being as stupid as I was. Just a bad decision."

For anyone who's unaware, Kardashian and Thompson endured two very public cheating scandals over the course of their relationship. First, in April 2018, photos and video footage emerged that appeared to feature Thompson with other women. This was just days before Kardashian gave birth to their daughter True Thompson. (While Thompson has not publicly acknowledged any of the cheating claims, Kardashian has talked about the situation on social media and on Keeping Up With The Kardashians.)

While they've had an undeniably rough past, it seems like Odom has nothing but praise for his ex-wife these days. In a May 29 interview with Us Weekly, Odom was asked if he thinks Kardashian is a good mother. Without hesitation, Odom answered, "Definitely. 100%. That’s got to be one spoiled baby."

This is based on his own experiences with the KUWTK star. Odom elaborated,

"There’s no doubt in my mind that she’s the best mother ever because she took care of a 29-year-old man like he was a baby. I had every candy, cookie, juice, champagne, ice cream. I didn’t need anything and that’s just on the small scale. She made this room for me in our home. She’s an incredible homemaker, but all women in that family are."

Unfortunately for baby True, her parents' relationship did not last. Thompson and Kardashian tried to make things work after she was born. However, in February 2019, Thompson and Kardashian split for good. This was after rumors surfaced that he cheated with Jordyn Woods, Kylie Jenner's longtime best friend. Woods denied getting "intimate" with the Cleveland Cavaliers player during a March 1 appearance on Red Table Talk.

When discussing Kardashian's struggles with Thompson, Odom told ET that she means "a lot" to him. He even shared, "I've still got a lot of love for her." He also admitted, "I'm blessed for her to even just pick up my phone call." This prompted the ET reporter to ask Odom, "Have you guys kind of made amends now?" The former Los Angeles Lakers player revealed,

"I mean, I wouldn't call it 'amends,' but I've spoken to her recently if you call that 'amends.'"

Then the reporter asked, "If you could say one thing to Khloé right now, what would you say? Lamar responded, "'I love you and thank you for being there for me when I couldn't walk or talk.' That love will never go away."

Of course, he's referencing his near-fatal overdose in 2015. Kardashian and her family stood by Odom's side even though the two of them were no longer together. She even temporarily halted their divorce proceedings so she could step in to make medical decisions in Odom's best interests.

As for Thompson, he hasn't publicly owned up to his reported indiscretions during their relationship. However, Odom has, many times now. What does Kardashian think about this though? Did it bring her closure? Is she bothered that he's bringing up the past to promote his book?

Most likely, she will delve into all of this on an upcoming KUWTK episode. Or at least that's what fans are hoping for.