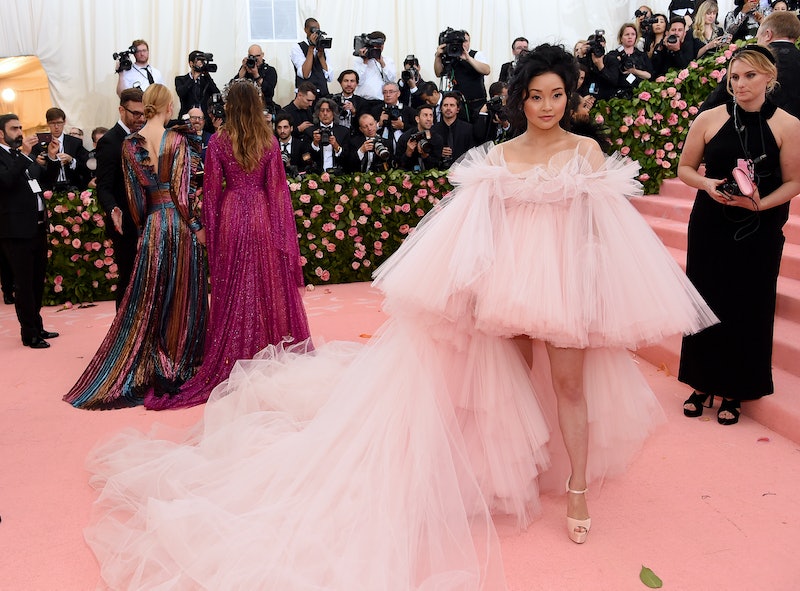 Everyone can relate to having to pat through their pockets in order to finally find their phone. Well, one A-lister just upped the ante on that. Lana Condor's 2019 Met Gala dress was so big that she couldn't find her phone in it. Forget having to rummage through your jean pockets — Condor had miles of tulle to get through.

The “Camp: Notes on Fashion” Met Gala was Condor's first ever Met Ball. She walked the pink carpet in an asymmetrical pink ball gown that looked like cotton candy. The designer was Giambattista Valli Couture, and the princess-like dress walked down Paris Couture Week in January of 2019. Now Condor got to make it her own, walking up the steps of the gala with yards of tulle trailing behind her.

While definitely a statement piece, Condor soon found one drawback with the couture gown. It was impossible to find your phone.

According to Teen Vogue, while Condor was sitting down to the dinner portion of the event, she discovered her phone was missing. Eva Chen, Instagram’s director of fashion partnerships, helped Condor find her phone and documented the whole thing on her Instagram Stories.

Chen was hanging out at Condor's table, who was dancing around to music with Camila Mendes and Charles Melton. It looked like in the middle of the festivities, Condor noticed that her purse and phone were misplaced.

"True Story: @lanacondor's dress was so big she lost her purse in it," Chen wrote in the first installment of the Story.

Since the two couldn't find it after rummaging through the miles and miles of tulle, the next logical step was to call the phone. "We literally had to call it and she had to see if she could feel it vibrating," Chen captioned the photo.

Condor posted the same photo on her own Instagram Stories and wrote, "The answer was, no, I did not feel it vibrate...& this point I was convinced I'd never find it."

Since Condor couldn't feel it vibrate, the two were now at a loss. That's when Melton crawled under the table with his phone light on, and went to see if her clutch was under there. And success, it was!

What a saga. In the end, Condor was reunited with her phone, but not after a solid few minutes of having to tunnel through her dress while trying to find it.

The struggle was well worth it, though. On Instagram, Condor posted a photo of her princess-like dress and added a touching caption underneath.

"When I was little, I’d get out of school on the first Monday of May, and I’d walk over and stand behind the gates watching the most beautiful women walk The Met Gala carpet... and disappear inside into, no doubt, a magical realm," Condor wrote. "Last night that magic became real. Thank you to everyone who worked so hard to make this huge dream of mine come true. I love you forever."

Even if some dresses are a pain, they're always worth it.