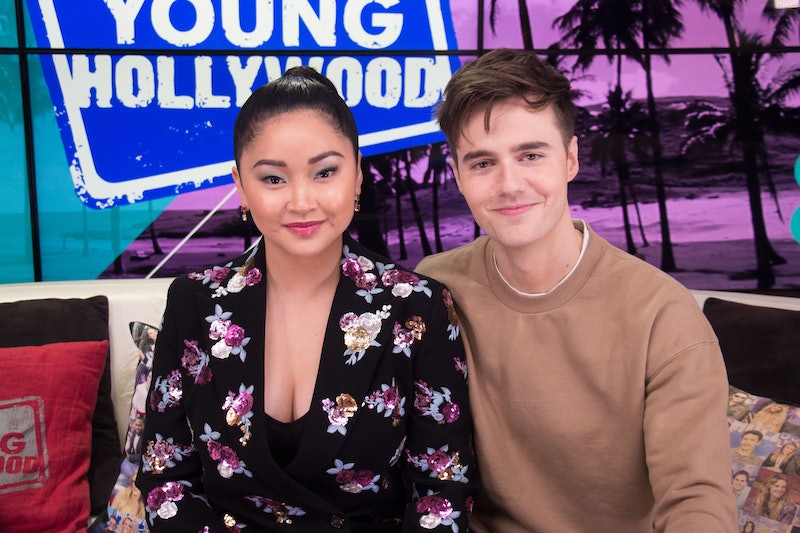 When she's not playing Lara Jean Covey, Lana Condor is a budding musician. Yes, you read that right. To All The Boys: P.S. I Still Love You star Lana Condor sings with boyfriend Anthony De La Torre on their new single "Raining In London," released on Wednesday, Feb. 19. And while the duet isn't as sweet and romantic as you may expect from the couple, it's sure to still give you all the feels. Take that, Peter Kavinsky!

On the new song, Condor and De La Torre sing about a devastating (and fictional) break-up and their lingering feelings for each other over a sparse piano melody, before the electronic breakdown makes everything go haywire. They put their acting skills to good use in the music video, also released on Wednesday, as they track the highs and lows of an ill-fated relationship — the romantic gestures, spontaneous journeys, and even a sexy photoshoot before it all comes crashing down — as it rains in London, of course.

The song marks Condor's music debut (unless you count a musical number with Bryan Cranston and Jimmy Fallon on The Tonight Show) and come from De La Torre's new EP Find Me, which Condor promoted on Instagram while posting about their duet. "I couldn’t be more proud of him," she wrote. "Against so many odds, he’s made this EP come to life for you all to hear. It’s definitely playing on repeat all day for me. I love you golden boy, thru and thru."

De La Torre opened up to People about the process of working with his long-time girlfriend, explaining that they were actually working on another duet entitled "See You" before his producer sent over "Raining In London," which they immediately fell in love with. And yes, they get the irony of the song. “So two people who are madly in love are singing about breaking up,” he said. “We’re both actors so we just love a good story. Lana and I would say ‘Raining in London’ is our worst fear for ourselves.”

Although Condor only appears on one song on the EP, De La Torre credited her as inspiration for the entire project. “I don’t think I would be doing this EP if it wasn’t for her,” he said. "She has really inspired me to grow in my music and grow in how I view myself." And if he has it his way, this won't be the last time they sing together. “Listen, Lana is a phenomenal singer,” he said. “So I’m trying to get her voice out there."

Now that her vocal chops are out there, the only thing needed is for Condor to sing in Always and Forever, Lara Jean and make it the first To All the Boys musical. You're welcome.

More like this
Kanye West Apologizes To Kim K "For Any Stress I Have Caused" In Rare Interview
By Jake Viswanath
Adam Levine Denies Having An Affair — But Admits He “Crossed The Line”
By Jake Viswanath and Radhika Menon
Snoop Dogg & Michelle Pfeiffer Lead Moving Tributes To Coolio
By El Hunt
Everything You Need To Know About ‘Black Panther: Wakanda Forever’
By Bustle Editors
Get Even More From Bustle — Sign Up For The Newsletter