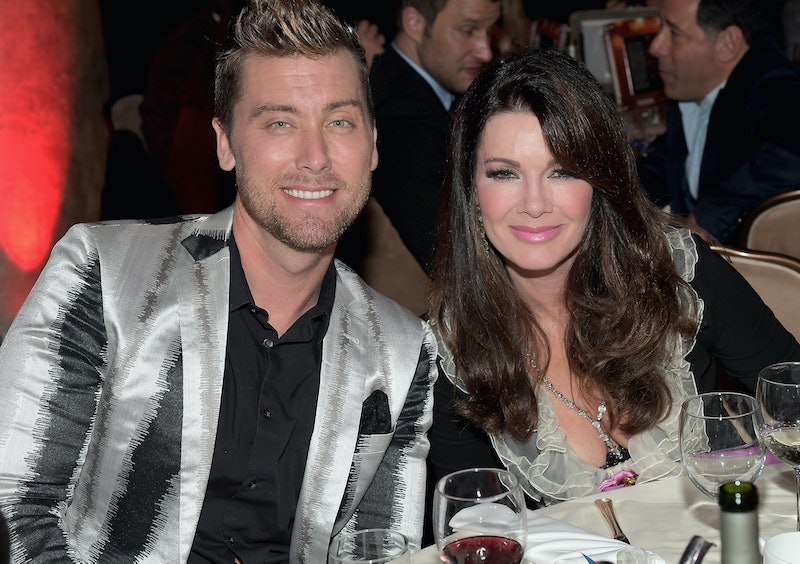 Justin Timberlake might be the former NSYNC member with an iconic "It's Gonna Be May" meme, but it's also an exciting month for Lance Bass, who celebrated his 40th birthday on May 4 with a star-studded bash. Alongside celebrity pals ranging from JC Chasez to Lisa Vanderpump, Bass said bye-bye-bye to 39 at his new West Hollywood restaurant Rocco's WeHo on Saturday night, according to People.

If you have serious FOMO, you're not alone, but thankfully Bass posted a series of photos from the party to his Instagram. The star's husband Michael Turchin was naturally on hand for the festivities, as were several former boy band members and Bravolebrities including 98 Degrees' Jeff Timmons, all of O-Town, Vanderpump's husband Ken Todd, and Vanderpump Rules star Kristen Doute. Other notable attendees? Queer Eye's Bobby Berk, actors Allison Janney and Retta, and singer Betty Who. It's an eclectic crew, but is it also the celebrity squad you never knew you needed?

Unsurprisingly considering that incredible guest list, Bass captioned a slideshow of several posts from the party, "Best. Birthday. EVER!!! @roccosweho was on (fire emoji) with some of my favorite people on Earth! My friends know how to throw one hell of a party. Thank you!" followed by a heart emoji and the hashtag #MayThe40thBeWithYou.

Bass also shared a video montage from the fun-filled evening, set to 50 Cent's "In Da Club." In the clip, Bass can be seen dancing and taking photos with guests before being serenaded with "Happy Birthday" next to his cake. He captioned the video: "Still reveling in the fun from Saturday! So many people to thank for the best birthday ever! Thank you."

According to People, Stoli Vodka crafted custom cocktails for the party with fitting names such as "Drop the Bass" and "*NSYNCO de Mayo." Per an Entertainment Tonight source who attended the bash, "The room was singing '90s hits the top of our lungs and with a packed dance floor." And apparently, those songs included Spice Girls hits — yup, the description of this night just got even more fantastic.

Even before the celebration, it had already been quite the year for Bass. In April, he joined his former NSYNC bandmates (other than Timberlake) at Coachella for a surprise appearance during Ariana Grande's headlining set. "I've been waiting all my motherf—ing life to say this: NSYNC," Grande said before she and the group performed the band's 1997 hit, "Tearin' Up My Heart" to the audience's clear delight. Grande's appreciation for the boy band is well known, as she sampled their song, "It Makes Me Ill" on her recent single, "Break Up With Your Girlfriend, I'm Bored." It's no wonder, then, that she asked NSYNC to join her on-stage during the festival.

Belting some Spice Girls songs late into the night, sipping on perfectly-named specialty drinks, and dancing with both Bravo royalty and Oscar-winning actors? If this is just the beginning of 40, than Lance Bass has quite the decade to look forward to.