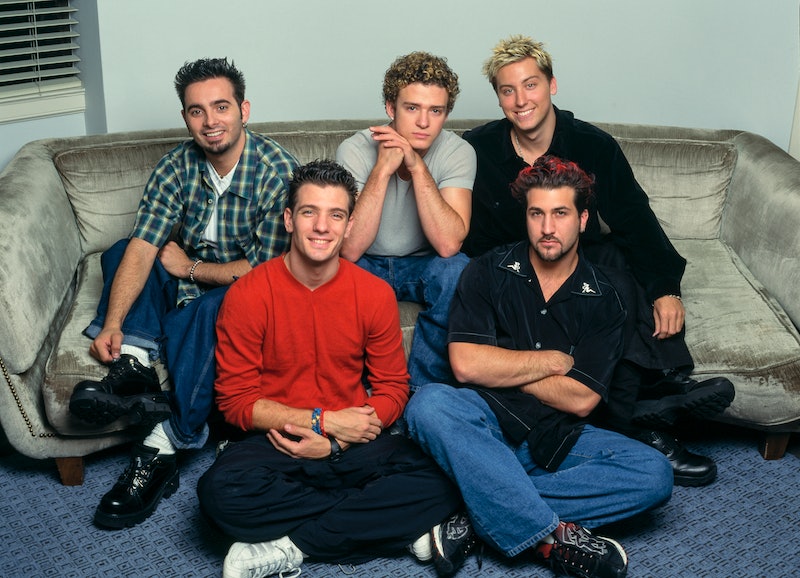 Hearkening back to a time when "Bye Bye Bye" and "It's Gonna Be Me" were topping the charts, Lance Bass' *NSYNC superfan movie will be a "love letter to the year 2000," the former boy bander recently told Entertainment Weekly. How could it not be? The untitled Bass-produced feature film is slated to be a fictional take on the real story of two fans who followed the group on their 2001 PopOdyssey tour in a Winnebago they'd won on The Price Is Right. "It was the biggest prize ever given on Price Is Right, I mean that is nuts to me," he explained in his EW interview, which the outlet published on Saturday, Feb. 15. "So that means it has to be a film."

Variety first revealed on Feb. 13 that, after reportedly trying to get the movie made for 20 years, Bass had teamed with Sony's TriStar Pictures and Cindy Cowan for what he'd reportedly pitched as a Girls Trip meets Pitch Perfect comedy. As the musician explained to EW, the young women had been following *NSYNC for two and a half months before he eventually learned of their adventures when Carson Daly interviewed the duo on TRL. The guys — including Justin Timberlake, JC Chasez, Chris Kirkpatrick, and Joey Fatone — immediately paid a visit to the RV outside their San Diego concert venue, Bass said, gifting the two best friends with tickets for all their remaining shows.

"I hadn’t seen these girls since that day, so we contacted them to see if they even wanted their story told, and they jumped at the chance," Bass added to EW of the Park City, Utah-based fans Meredith Sandberg and Winter Byington. "They're so lovely. It was nice to see them get back together because, you know, life gets in the way, everyone moves to different places, and it was nice to see their friendship bond more in the development of this film."

That being said, neither the two women — nor *NSYNC for that matter — will actually be playing themselves in the movie, which will be set in the present day. (Bass did, however, note to EW that the script has not yet been written and "who knows" what he'll eventually decide.) On his wish list to play the fans: a "type of great comedian" like Ellie Kemper or Amy Schumer.

Bass had previously teased the movie in a Feb. 2019 interview with Variety, saying it would be "a really fun story about these girls that win a Winnebago on The Price Is Right and follow us on tour — which randomly happened." He also expressed hope that the project could even lead to a Broadway show down the line.

Despite *NSYNC's probable absence, fans need not worry about plenty of early 2000s music making it to the soundtrack. In addition to including some original songs, the movie will very much be a "love letter to the year 2000," promised Bass, who previously produced 2019's The Boy Band Con: The Lou Pearlman Story. "So you'll get that amazing music because, you know, on a road trip it's all about the playlist you have," he said. "So the playlist we're going to create for this film is going to be spectacular."

And with a bop-filled discography like *NSYNC's (and so many others) to draw upon, the movie sounds like it will have all the elements to transport fans right back to TRL's golden era.

More like this
20 Years Later, Kelly Clarkson & 'American Idol' Judges Reunite For Her Hollywood Walk Of Fame Star
By Radhika Menon
The Trailer For The Whitney Houston Biopic Has Twitter Feeling Heated
By Radhika Menon
The Spice Girls Just Dropped A Brand New Music Video
By Sam Ramsden
Trevor Noah Hilariously Clapped Back At Racist Attacks On ‘The Little Mermaid’
By Brad Witter
Get Even More From Bustle — Sign Up For The Newsletter