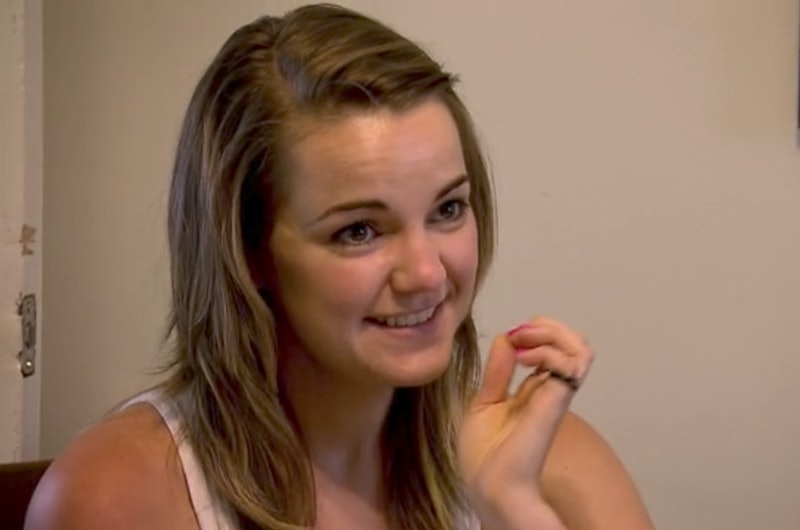 Heads up,Vanderpump Rules fans. Here is some trivia you never knew you needed. Pump Rules' Laura-Leigh was on Gossip Girl. Yes, the woman who once dated Jax Taylor and was questioned by Lisa Vanderpump for whether or not she and Jax had sex in SUR's bathroom (they did, but denied it to LVP) starred in Season 2, Episode 4, "The Ex-Files," on the huge CW drama.

If you happen to find yourself wanting to marathon the entire series, then you'll want to be sure to keep an eye out for Laura-Leigh's (who goes by Laura-Leigh Claire now, according to her IMDb) guest appearance. She's only in one episode, but she definitely makes her mark as Amanda, the new student at Constance.

In the episode, Amanda catches the eye of Dan, who recently broke up with Serena — again. (Seriously, all these two did was get back together and break up). Amanda and Dan bond over their love of books and it's something Serena tries to be totally cool about, but she fails miserably. Lonely Boy and S sure had some tough lives, didn't they?

Let's just say things get rough for Amanda thanks to Serena going back to her Queen Bee ways. With that, here is a rundown of Laura-Leigh's brief, but oh-so-memorable, GG stint. And remember, this was a whole five years before she started on Vanderpump Rules in 2013.

The two literally run into each other and instantly have a connection.

Serena tries to be chill (it doesn't work) over the fact that Dan is having lunch with the new girl.

Of course, Serena's BFF tells Amanda to avoid Dan at all costs and then invites her to lunch, so she can't go to lunch with him.

Lunch With The Queen Bees

Amanda ends up going to lunch, but isn't happy about it. It's important to note Serena is not OK with any of this — and neither is Dan when he learns what happened.

The Big Date — With Serena

For some reason, Serena thinks it's a great idea for all three of them to go out together to smooth over any awkwardness the lunch may have caused. Well, things go from bad to worse real fast — including when Serena finds a random guy to join them at the table.

Her Hair Falls Out

Here's where things get really, really, really bad. Blair's minions, Penelope and Isabel, throw a blue concoction, aka a "Nairtini," onto Amanda's hair, so it ends up falling out. Oof. Serena didn't tell Penelope and Isabel to do this, so it technically wasn't her fault, but the entire situation, including Amanda and Dan seeing each other, pushes her to take over Blair's reign as queen.

Surprise! Amanda Was Scheming With Chuck

That's right, Amanda doesn't even really like Dan. Chuck hired her to help him make Serena jealous so she would dethrone Blair, because, Chuck "has his reasons." He pays Amanda and tells her she's going off to boarding school in Vermont. This is the last time fans see Amanda.

Unlike most everyone on Pump Rules who wanted/still wants to be an actor and continues working at SUR, Laura-Leigh has actually made her acting dreams a reality. While her role as Amanda was years before Vanderpump Rules, the now 37-year-old is still acting. As listed on her IMDb page, post-reality TV, she was in We're the Millers, The Client List, and will be in 2018's Under the Silver Lake, which also stars Andrew Garfield, Riley Keough, and Topher Grace.

It definitely was a special treat to see Laura-Leigh pop up on Gossip Girl, because if anything makes this ridiculous, yet addictive, series better it's a Vanderpump Rules guest star.

More like this
Netflix Reveals First Look At Wednesday In The 'Addams Family' Spinoff Series
By Bustle Editors
Kenan & Kel Just Reunited At The 2022 Emmys & Twitter Is Overjoyed
By Grace Wehniainen
What Does Nancy Jo Sales Think Of 'The Real Bling Ring'?
By The Editors
'Survivor' Is Finally Coming Back To UK Screens
By El Hunt
Get Even More From Bustle — Sign Up For The Newsletter