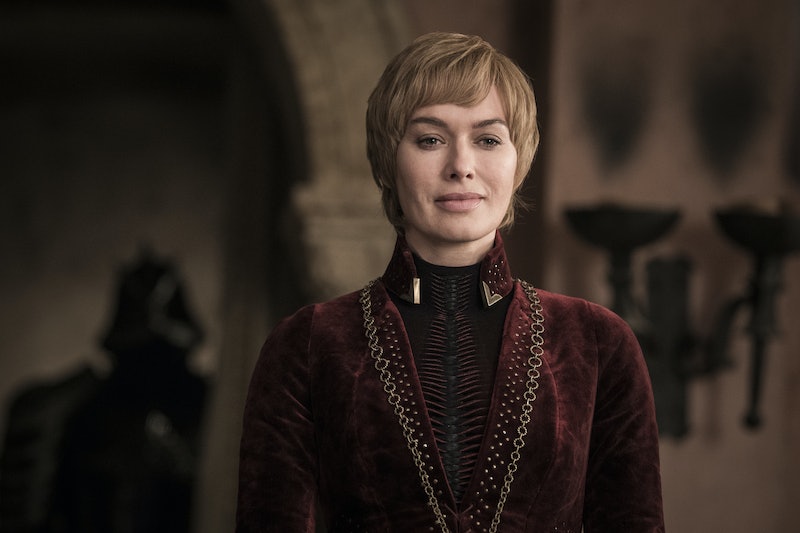 Spoilers for Game Of Thrones Season 8 Episode 5. Cersei is gone, but she definitely won't be forgotten. Especially by the woman who played her for the last eight seasons. Following Sunday (May 12) night's episode, Lena Headey paid tribute to Cersei, who appeared to die in the arms of her lover/brother Jaime Lannister as Daenerys Targaryen burned all of King's Landing down in "The Bells." Headey's farewell message on Instagram was short, but sweet, and celebrated all the good, the bad, and the more bizarre parts of playing Queen Cersei.

"There she goes. It’s been fun, and bonkers," Headey wrote on Monday, May 13, after her final episode. "I loved her. I am grateful for the opportunity." Headey wrote that she was "massively thankful for your encouraging and supportive love along the way" before making a very on-brand GoT joke.

"And now her watch is ended," Headey wrote, before admitting Cersei probably wouldn't have cut the muster for Jon Snow and the other guys that protected The Wall. "(I know she’d never make it, Nights watch wouldn’t have her .. but still..)"

It's true, despite spending most of Season 8 staring out the window, Cersei wouldn't be a good fit for the Night's Watch. But, she was always very good at seeing one step ahead of her enemies. It's what made her so good at playing the game, she understood that it was always about strategy.

And she always knew the stakes. "When you play the game of thrones, you win or you die," Cersei told Ned Stark in Season 1. "There is no middle ground." Cersei died because she couldn't out maneuver Dany and her last remaining dragon. She lost, and so she died.

In the end, Cersei's death was as tragic as her life. She didn't get some dramatic death, instead she died quietly mourning the loss of another child. "I want our baby to live," Cersei cried to Jaime as the walls of the Red Keep crumbled around the. But it was clear that wouldn't happen. now that Khaleesi had gone full Mad Queen and wasn't interested in seeing Cersei survive.

In the final moments, fans saw the gentler side of Cersei, who always had a soft spot for her kids. And Headey admitted to Entertainment Weekly that she had "mixed" feelings about her more reserved final scene. "I wanted her to have some big piece or fight with somebody," Headey said, likely echoing what many fans wanted for her, too. In the end, though, the actor felt that Cersei dying alongside Jaime felt fitting, if not the most obvious way for her to go. "It’s maybe the first time that Cersei has been at peace," she told EW.

In addition to saying goodbye to Cersei, Headey also paid tribute to her co-star Nikolaj Coster-Waldau, who played Jaime Lannister, on Instagram. "I f*cking love you ya big weirdo," Headey wrote, following the episode.

The feeling was mutual, as Coster-Waldau made clear in his own tribute to Headey and her character. "The best, sweetest most wonderful sister from another mother @iamlenaheadey," he wrote. "That was a fun decade."

It really has been fun to watch Headey break bad over and over again. Let's raise a glass of wine to the real Queen of Game Of Thrones.