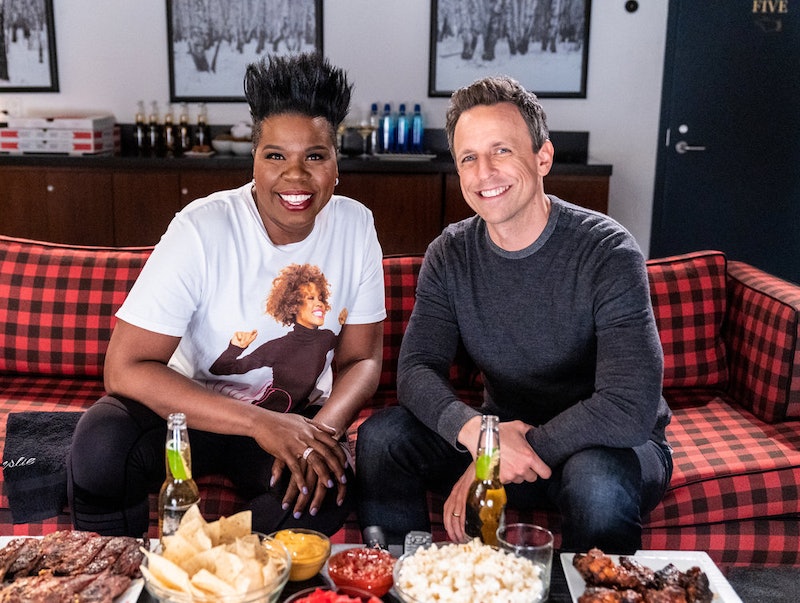 The final episode of Game of Thrones has aired, and so, the show's most famous fan's watch has ended. In the last installment of "Game of Jones," Leslie Jones had a message for Thrones fans disappointed by the show's ending: it's just as TV show.

The Saturday Night Live star joined her good friend Seth Meyers to for one last installment of Late Night's beloved segment, in which the pair watch Game of Thrones together and provide commentary. Spoilers for Game of Thrones ahead. And while Jones wasn't a huge fan of some of the show's storylines — most notably, the fact that Jon Snow (Kit Harington) and Daenerys Targayen (Emilia Clarke) were related — she was pleased with the way everything settled in Westeros at the end. "People are disappointed about the ending," Jones said. "I think they need to take a big glass of 'Grow the F*ck Up,' because Game of Thrones is not real."

Still, just because it's not real doesn't mean it's not hard to say goodbye. After all, the end of one of the biggest TV phenomena in years does mean that fans will no longer get Jones' hysterical takes on the show, including comparing Tyrion (Peter Dinklage)'s walk through a charred King's Landing as "coming home from Vegas," and her take on what Brienne (Gwendoline Christie) really wrote about Jaime (Nikolaj Coster-Waldau) in the history books.

"She gotta write about Jaime Lannister!" Jones said, offering her take on the GoT finale meme that took over social media after Brienne memorialized the former Kingslayer onscreen. "'This is the story about a one-handed f*ckboy, who left me out in the snow in my housecoat,'" Jones began, before launching into a rant about Jaime that, sadly, was so inappropriate that it was completely bleeped out by the censors. "'He took my virginity and just rolled off with one hand!'" she finished.

In addition to editorializing Brienne's writings about Jaime, Jones also offered a very disturbing answer to one of the lingering mysteries about the Game of Thrones finale: what all that ash or snow was in King's Landing. "It's snowing from ash, homie," Jones said. "That's body ash, too. So that's people's bodies ... That means that that snow that's coming down, it's like dandruff. It's body dandruff."

"It was already distressing and you made it ten times more [upsetting], now," Meyers responded.

While many fans were upset with the way that the events of Season 8 unfolded — with one fan even starting a petition to have HBO remake the final episodes of the show "with competent writers" — most of the Thrones cast are, like Jones, content with the way the show ended.

"I always knew that the show was never going to satisfy everyone. I watched and loved too many television series to ever think that would be possible," Clarke told the New Yorker about Dany's final storylines on the show. "The stories are too vast, the characters too complex. The show is, in a certain way, divisive ... Also, if you’re pleasing everyone, then it’s probably quite tepid. But to me it seemed like the only way it could end."

Whether fans are happy with the way that Game of Thrones wrapped up or not, one thing is for sure: the saddest part of the show finally ending is the culmination of the funniest recap on the Internet, "Game of Jones." Here's hoping Jones and Meyers find another show to watch together, ASAP.