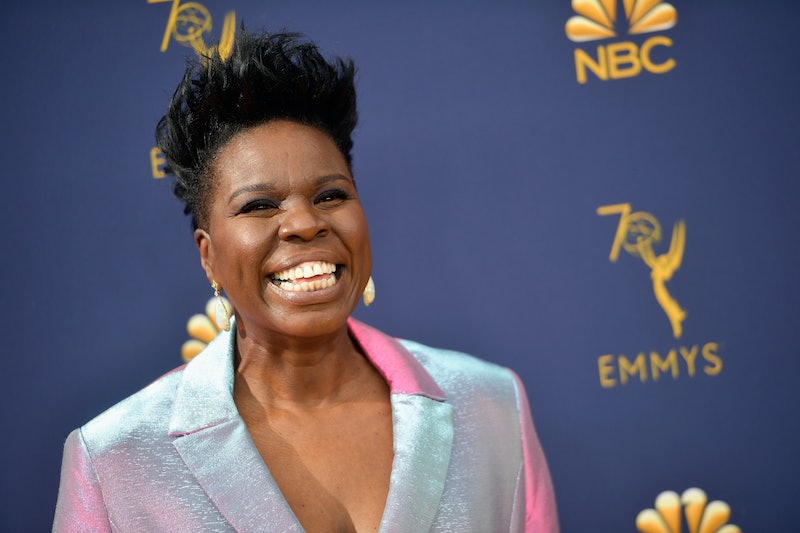 One of the biggest news stories leading up to Saturday Night Live's 44th season finale was Alabama's abortion ban. And during Leslie Jones' Weekend Update segment on SNL, she made her thoughts on the law loud and clear. She has no interest in letting anyone else tell her what she can do with her body.

Alabama's abortion law, which was signed earlier this week, is the nation's most restrictive abortion ban to date. It criminalizes abortion at any stage unless there's a fatal fetal abnormality or lethal risk to a woman during pregnancy, and makes no exception for cases of rape or incest. It also threatens to imprison doctors who perform abortions in the state for up to 99 years.

This strikes many people across the country as extreme, and has caused significant backlash across social media. So for a few minutes on SNL, Jones served as a mouthpiece for many American women outraged about the policing of their rights and bodies. "Basically we're all Handmaid's now," Jones explained, appropriately clad in outfit from Hulu's The Handmaid's Tale, which envisions a dystopia in which women's sole purpose is to forcibly bear children for men.

"My name is actually Ofjost," Jones continued, referring to the long-running onscreen flirtation between her and Weekend Update anchor Colin Jost.

She then removed her Handmaid's costume to reveal a t-shirt with the word "Mine" on it, as well as an arrow clearly pointed at her own uterus. Jones said she sees the repealing of abortion rights in America as a slippery slope to the world depicted in The Handmaid's Tale, saying that while we're only seeing the repeal of rights in some states, it could only be a matter of time before Jones finds her credit card declined at Starbucks because she's a woman, as opposed to the "regular reason which is that I have no money on it."

Next, Jones turned her attention to the 25 Alabama senators who voted for the ban, noting that they all look like "the mugshots of everyone arrested at a massage parlor," before explaining to anyone who agrees with the senators' votes that "you can't control women, because — uh, I don't know if y'all heard — but women are the same as humans. And I am Leslie 'Dracarys' Jones," she said, invoking the spirit of another popular television character fed up with a patriarchal world that sought to control her.

"When women have a choice, women have freedom," Jones exclaimed towards the end of her segment. "The fact that nine states are doing this means that this really is a war on women. And if you're a woman out there and you feel scared or confused, just know that you're not alone."

Jones' address wasted little time trying to appeal to the men who are repealing abortion rights and instead focused on empowering those who are feeling hurt and discouraged by these laws. Jones proclaimed to anyone watching that they have the personal support of none other than Leslie 'Dracarys' 'That Bitch' Jones.

More like this
UK Viewers Will Have To Wait To Watch The Handmaid’s Tale S5
By Maxine Harrison
This House of the Dragon Character Will Create Another Scandal For Rhaenyra
By Kadin Burnett
'Big Brother' Is Already Looking For New Houseguests To Compete In Season 25
By Brad Witter
Nicola Coughlan Shared A Lady Whistledown Excerpt From ‘Bridgerton’ Season 3
By Grace Wehniainen, Alyssa Lapid and Sam Ramsden
Get Even More From Bustle — Sign Up For The Newsletter