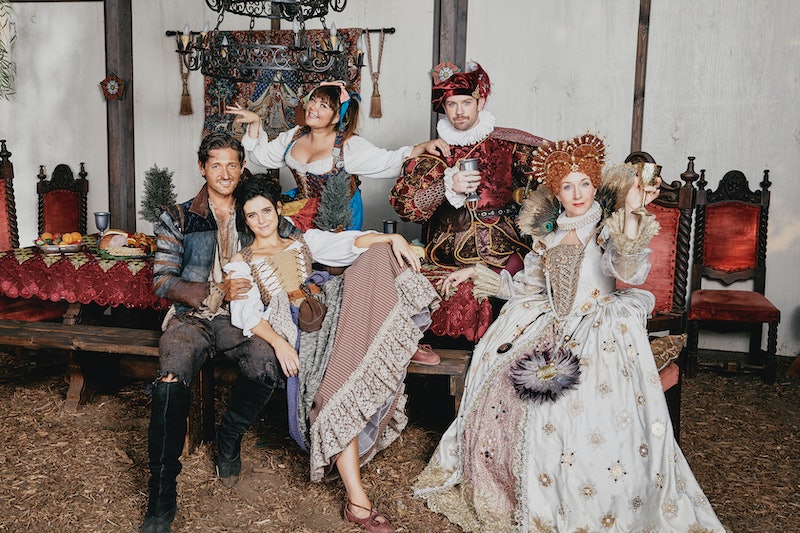 It's a sweltering June afternoon in Simi Valley, California, where executive producer Jamie Denbo is leading a group of reporters through the renaissance faire of Lifetime's American Princess. It's not an actual ren faire, but the set of her new TV series, recreated impeccably all the way from the gift shops down to the mud pit. The depth of detail is not surprising: it's modeled after the Renaissance faire where Denbo once worked, an experience that served as the inspiration for the show.

"It's a story that I think I've wanted to tell for a long time," Denbo says during a set visit in June 2018. "My two worlds — alternative comedy and, oddly, this weird Ren faire offshoot — don't necessarily always come together, and I think we're trying to make them come together in a way that it will be both really sharp and funny and loving."

America Princess, premiering on June 2, follows Manhattan socialite Amanda (played by Georgia Flood) as she starts working and living at a Renaissance faire after catching her fiancé cheating on their wedding day. At the faire, Amanda makes new friends and may even find love again in a world where her Vassar English degree is more relevant than ever.

As preparation for their roles, the cast attended Southern California's popular Original Renaissance Pleasure Faire, which is held annually in Irwindale — except for Flood, who wasn't able to go. But the Aussie native (who spoke in her American accent while filming) says that actually added to her portrayal of Amanda, since her character experiences the faire for the very first time in the American Princess pilot.

Flood feels a certain kinship with Amanda, seeing a lot of similarities between herself and the character. "She wants to do the right thing by people," Flood tells reporters. "Even if she misses when she hits, she tries again and she doesn't give up. She wants to be free and all these things that resonate with me."

Amanda finds that freedom at the Renaissance faire, where she lives with her sexually liberated roommate Delilah (Mary Hollis Inboden), tries to win the favor of the faire's "Queen Elizabeth" (Seana Kofoed), and has romantic chemistry with David (Lucas Neff), who performs Shakespeare parodies as mud-pit dweller Pizzle Humpsalot.

American Princess is a dramedy, but it originally started out as a rejected pitch to a History Channel exec with Denbo's friend Jenji Kohan (Orange Is The New Black). Two years later, the History Channel exec moved to Lifetime and expressed interest in developing the pitch, which Denbo called "Private Benjamin at the Ren faire" — a nod to the 1980 movie about a socialite (played by Goldie Hawn) who joins the army.

Kohan is now an executive producer, and Denbo is proud to mention that 50% of American Princess's Season 1 directors are female, along with the fact that the set is filled with many women working behind the scenes — a rarity in Hollywood. "A lot of my experience comes from being on sets as an actor. In my personal point of view, I find that mostly female productions are run a little bit smoother," Denbo, who's appeared in shows ranging from Spechless to Weeds, reflects. "I didn't even really think of it as a thing until I remember that most sets are not like this."

And most sets also don't closely resemble a Renaissance faire, where viewers will watch hilarity (and romance) ensue on American Princess this summer.