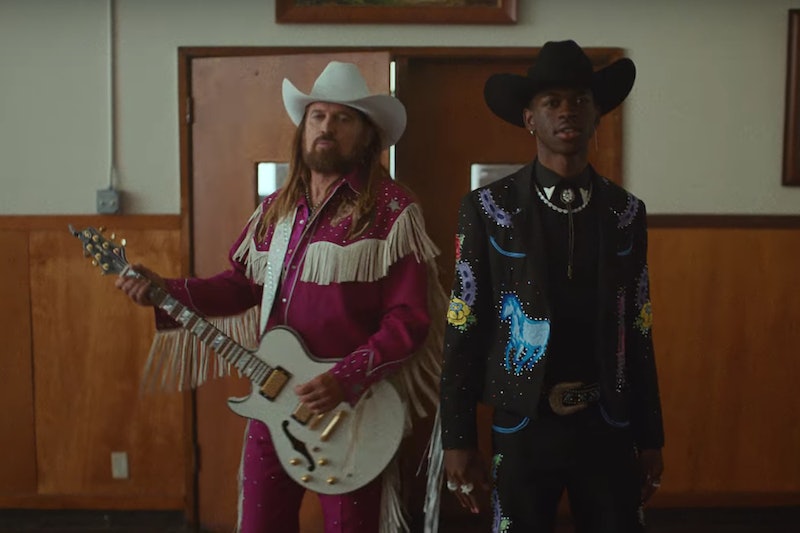 Welcome to the yeehaw renaissance. Lil Nas X and Billy Ray Cyrus released the music video for the “Old Town Road” remix — and it is filled to the brim with celebrity cameos. Well, music video is a loose term. Coined as an official movie, the video premiered on Friday, May 17, and follows the structure of a short western, with shotguns and horse chases galore as our protagonists (Lil Nas X and Cyrus) are transported from the Wild Wild West of 1889 into modern day America. And the western includes appearances from Chris Rock, Vince Staples, Haha Davis, Rico Nasty, Diplo, Jozzy, and Young Kio.

The video begins with Lil Nas X fleeing from a group of men on horseback with a burlap cash bag in tow. Eventually, the men give up chasing him — he's just too fast. As sheriff Chris Rock says, “When you see a black man on a horse going that fast, you just gotta let him fly.” Lil Nas X meets up with Billy Ray at a cabin to settle in and hide out for the night, to which the rapper muses, “I don’t know man. Last time I was here they weren’t too welcoming to outsiders.” Billy Ray then quips, “Eh. You’re with me this time.” Are we sure he's talking about a cabin and not the Billboard country charts?

In case you missed it, “Old Town Road” acquired viral fame on TikTok and leapt into the mainstream after it spent several weeks on Billboard’s country charts. But because the track did “not embrace enough elements of today’s country music to chart in its current version,” Billboard removed the song from the charts in early April, which resulted in upheaval on the internet. Following the debacle, country veteran Cyrus reached out to the rapper to collaborate on a remix. Of course, Billboard’s removal of “Old Town Road” thus sparked numerous debates surrounding the gatekeepers of country and the evolution of the genre itself. In March, “Old Town Road” returned to the Billboard charts — this time with a No. 1 spot on the Billboard Hot 100.

Following the movie’s release, fans took to social media to fawn over the cinematic experience. Because memes will always be a given, one Twitter user, @kaludiasays wrote, “THIS!! IS!! CAMP!!” (Likely a reference to the 2019 Met Gala's over-the-top theme.)

Following the video's positive reception, Lil Nas X took to Twitter to share that he was “slightly overwhelmed.” He wrote, “hey everybody if you are texting or messaging me right now i will try to get back to you. i’m just slightly overwhelmed and it’s making my head hurt. thank u for ur consideration!!”

Prior to the debut of the video, the rapper also shared a series of behind the scenes photos from set — such as the one below with collaborator Cyrus, (which will probably, definitely be used as a lockscreen wallpaper on many phones around the world).

The official music video for the "Old Town Road" remix is available to watch now. Clint Eastwood? I don't know her.

More like this
The Trailer For The Whitney Houston Biopic Has Twitter Feeling Heated
By Radhika Menon
Everything To Know About Taylor Swift’s 10th Studio Album, 'Midnights'
By Grace Wehniainen and Jake Viswanath
Twitter Is Freaking Out Over Rihanna’s 2023 Super Bowl Halftime Show Announcement
By Stephanie Topacio Long
Two UK Cities Are Now In The Running To Host Eurovision 2023
By Sam Ramsden and Rachel Mantock
Get Even More From Bustle — Sign Up For The Newsletter