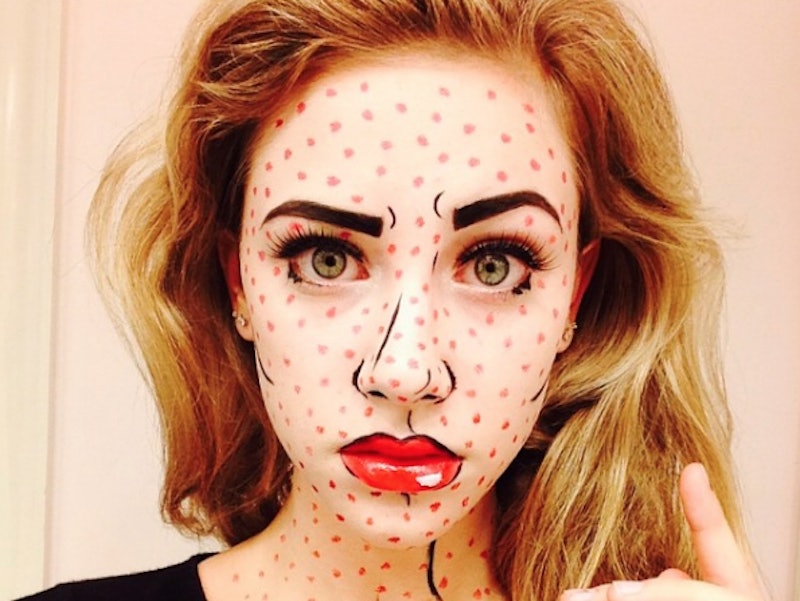 There's something so magical about on-screen characters coming to life off-screen, and this recent find could be the best one of all. According to HelloGiggle, Lili Reinhart from Riverdale loves to create cosplay and FX makeup looks in her free time. Because of course she does. Not only is the actress a believable on-screen cartoon character, but she manages to pull off tons of other looks in real life. The finished creations will give you major Halloween inspo, too.

If you're not familiar with Riverdale, the show is based off of the old Archie comics. Characters like Jughead Jones, Veronica Lodge, and Reinhart's Betty Cooper are brought to life to live in the town named after the show. Think: lots of '50s-inspired settings with modern day styles. So Reinhart's love for cosplay makes complete sense with her character, infusing comics and cartoon looks with some serious skill.

Reinhart's current Instagram feed might be filled with professional photoshoots and pictures of her and the Riverdale cast, but if you scroll back far enough, you'll see tons of different makeup creations. The looks range from FX gore creations to pop-art inspired makeup.

“I took it upon myself to buy a bunch of random special effects makeup and experiment and that’s how I got into it," Reinhart said in a HelloGiggle interview. "Then, special effects slowly turned into more face paint and cosplay makeup. I definitely have a little makeup artist in me."

Reinhart isn't a stranger to Comic Con, either. For the past two years, she's joined the cast on-stage to talk about the show. Of course, she looks a lot more, er, professional when she's hitting the event with the cast.

When it comes to Halloween, she's always willing to go all out though, according to her HelloGiggle interview.

Here's some of her best creations thus far, so you can get in the Halloween spirit too.

This look is so simple, but Reinhart pulls it off flawlessly. You could easily recreate for All Hallows Eve.

Reinhart manages to pull off the most stunning tribute to the artist, using just three different products. This is an absolutely stunning look, and I'm dying to know what lipstick shade that is.

Her most recent makeup look was a nod to another cartoon character as well. Reinhart had the entire Harley Quinn look down, from her hair and makeup to the outfit.

This could just be the coolest look that she's done to date. The actress combined the pop art and zombie trends into one for the Halloween 2015 makeup creation.

Her talents don't just end at makeup, either. Apparently her can DIY just as good. According to her Halloween 2015 post, Reinhart made her Maleficent horns out of construction paper and duct paper. Not to mention she has some phenomenal black contouring as well.

Get you a man that let's you pain his entire face for Halloween. This is a phenomenal couples costume, and, as of Oct. 13, is the only one she features on her page.

Reinhart opts for a black and white pop art rendition of Marilyn Monroe, as compared to her classic, red-lipped persona. The hair really pulls this one all together.

She's great at doing other people's makeup too. Reinhart created this black and white skull look on her sister in summer of 2015.

Reinhart also dabbles in FX makeup, too. She created this look to seem as if she had frostbite. It's like she was predicting Riverdale's Season 1 finale back in 2015.

Between the contacts and the exposed jaw, this is about as creepy as they come.

I absolutely love how she can go from full-on gore to princess-inspired look in the same week.

I can't get over how amazing her pop art creations are.

This is one of the first looks that she shared on Instagram, back in 2014, but it was just as amazing as her later creations.

Petition for Reinhart to start a YouTube channel, anyone?