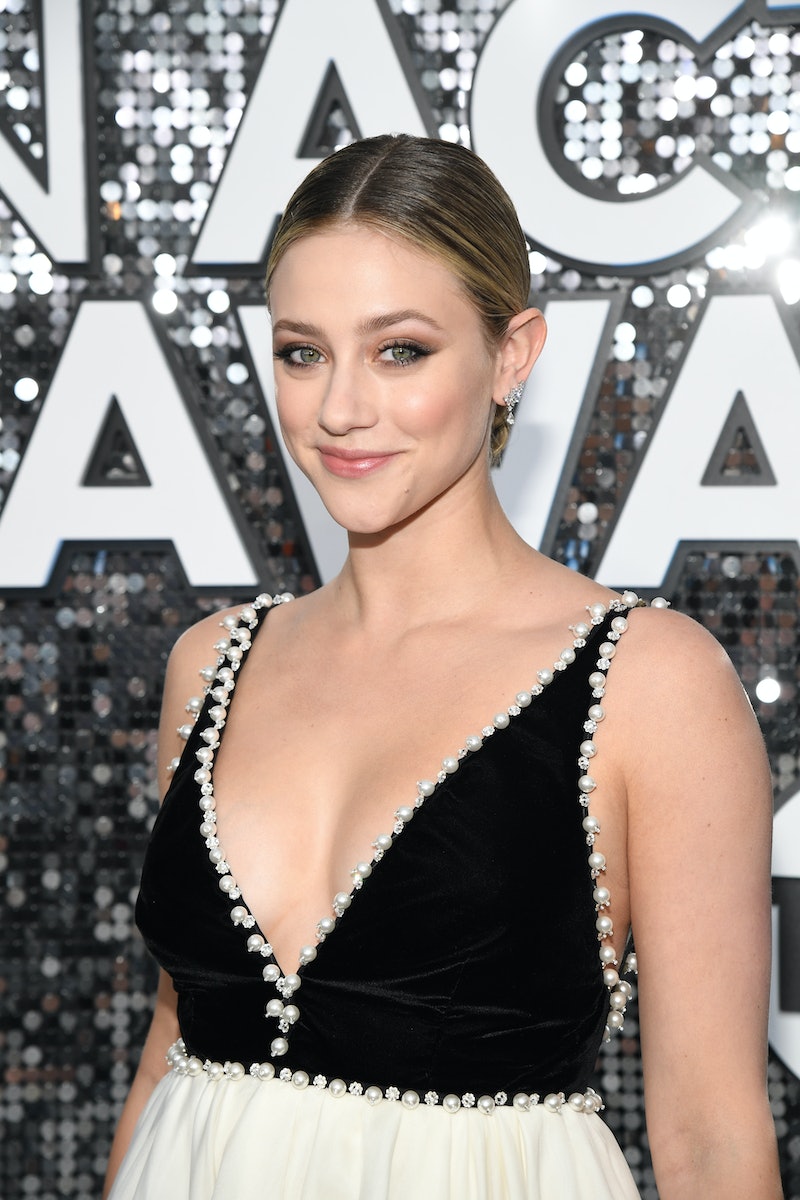 It turns out that having good looking twenty-somethings playing teenagers on TV isn't just intimidating to the audience, it's hard on the actors too. In response to a fan question about body image on Thursday, Feb.6, Lili Reinhart admitted she felt "intimidated" by her Riverdale costars after gaining weight, and feeling like she didn't measure up to their physiques. The actor opened up about her own body image in response to a since-deleted tweet in which a Riverdale fan reportedly asked Reinhart about the impact of the "chiseled" cast playing teenagers on the hit CW show.

"Actually, not everyone on this show is perfectly chiseled," Reinhart began her frank Twitter thread, before sharing that "even I feel intimidated by the physique of my surrounding cast mates sometimes when I have to do bra/underwear scenes." Explaining that the unrealistic expectations for what women on TV "should look like" has taken a toll on body image, Reinhart revealed that she still struggles with accepting her body as it is. "I’m not the kind of person you would see walking on a runway during fashion week," she wrote. "I have bigger boobs, I have cellulite on my thighs/butt, and my stomach sticks out rather than curves in."

Reinhart continued, revealing that her experiences with depression have recently resulted in her gaining weight, something she's "felt very insecure about it." Despite that, when she had to be scantily-clad to film a recent Riverdale scene, she felt it was important to show off how her body really looks. "[I] felt it was my obligation to be strong and show confidence in myself, looking as I do," Reinhart wrote, adding, "I want other young women to see my body on tv and feel comfort in the fact that I’m not a size 0."

Since Riverdale premiered in 2017, Rienhart has been open about her struggles with body image and the unrealistic standards that are promoted by Hollywood. In April of 2018, the actor explained that she often shares her breakouts on social media, in order to combat the "body dysmorphia" her cystic acne caused as a teenager. "When I have a breakout it triggers me back to that time when I was a teen and I feel so self-conscious — like the whole world is looking at my bad skin," she told Seventeen at the time. "I’ve definitely not gone out of the house because of a breakout, which is horrible."

Reinhart continued to advocate for self-acceptance when she was named the newest CoverGirl in October of 2019. Announcing the news, she wrote on Instagram that she hoped to "advocate for confidence & self acceptance in a world where so many young men and women feel compelled to change themselves."

A month later, she called out the BodyTune app on her Instagram Story, writing that the "hazardous" photoshopping app can cause psychological damage to people with body image issues. "This is why people have unrealistic expectations of their bodies," Reinhart wrote at the time, adding that, "our bodies should not conform to 'one size fits all."'