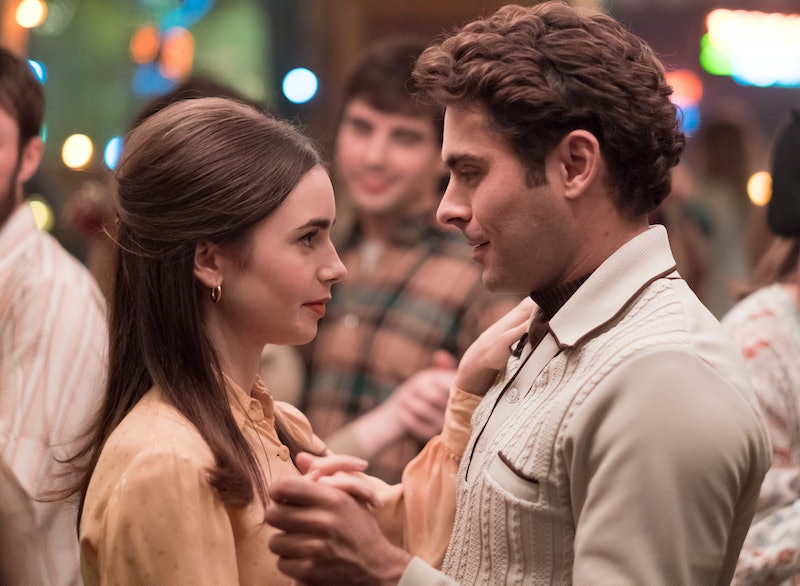 Most people who read about the serial killer Ted Bundy find themselves haunted by his crimes, but for one person, that haunting was a little more literal than most. In a recent interview with The Guardian, Lily Collins revealed the ghosts of Ted Bundy's victims visited her while she prepared to play Elizabeth Kloepfer in Netflix's Extremely Wicked, Shockingly Evil and Vile.

Collins explained that while prepping for the film — which follows single mother Kloepfer after Bundy is arrested for murder and kidnapping and she is forced to come to terms with the idea that her boyfriend, Ted, isn't who she thought he was — she kept waking up at exactly 3:05 a.m. every morning. "I would go downstairs and have a cup of tea, trying to figure out why I had woken up again," she recalled to the outlet. "I started being woken up by flashes of images, like the aftermath of a struggle."

After this happened several times, Collins did some research online and, she said, "I discovered that 3am is the time when the veil between the realms is the thinnest and one can be visited." With that in mind, the actor became convinced that it was the ghosts of Bundy's victims who were possibly trying to contact her in the middle of the night. "I didn’t feel scared — I felt supported," Collins said of her reaction to the visits. "I felt like people were saying: 'We’re here listening. We’re here to support. Thank you for telling the story.'"

One of the country's most notorious serial killers, Bundy confessed confessed to murdering a minimum of 36 women across the United States between the years of 1974 and 1978, though some experts believe that the actual body count might have been closer to 100, according to the Laredo Morning Times. In addition to the horrifying nature of his crimes, Bundy received a great deal of press attention during his trail due to the fact that he was considered to be a normal, "charming," young man, unlike the common stereotype of the creepy loner who the public thought was responsible for the murders.

In 1969, Bundy met Kloepfer at a bar, and the pair lived together for years while he helped her raise her daughter, Tina. Though she wasn't aware of his crimes, Kloepfer did offer several tips to the police that helped connect him to the disappearances of two women in Washington's Lake Sammamish State Park.

Extremely Wicked, Shockingly Evil and Vile centers on Kloepfer's relationship with Bundy, and includes her discovery that her live-in boyfriend may be hiding an incredibly dark secret, and her decision to help the police solve the crimes. In an interview on the British television show, This Morning, Collins revealed that she met with Kloepfer — who now goes by Elizabeth Kendall — to discuss the film, and got her seal of approval for the performance.

"I went and met the woman that I play. It was really helpful. She was so gracious, giving me material to look at and speaking to me," Collins said. "I don’t know if she’s going to see the movie because it’s difficult, but within the filming process, she came on set and she was a positive light on-set. You wouldn’t expect that with what happened. She gave us her support. She’s really lovely."

While the trailer for the film has received some criticism for "glorifying" the killer, Kathy Kleiner Rubin, who survived an attack by Bundy in 1978, also gave the film a seal of approval, based on the casting of Zac Efron. "I don't have a problem with people looking at it, and as long as they understand that what they're watching wasn't a normal person," she told TMZ about the trailer in January. "I think the movie does glorify him more than I think he should be, but like I said, I think everyone should see it and understand him as what he was even when he was the 'perfect son,'" she said in a video chat interview with the outlet.

Everyone watching Extremely Wicked, Shockingly Vile and Wicked on Netflix will have to make their own judgements about whether or not the film goes too easy on Bundy, but it seems that Collins, at least, has done her best to make sure that the victims and Kloepfer are portrayed onscreen with the respect that they deserve.

More like this
Here’s Everything Coming To & Leaving Netflix In October
By Jake Viswanath
12 ’90s Movie References You Missed In 'Do Revenge'
By Radhika Menon
What’s New On Netflix: Ana De Armas’ 'Blonde' & A Nick Kroll Special
By Arya Roshanian
These 25 International Horror Movies On Netflix Prove Fear Is A Universal Language
By Bustle Editors
Get Even More From Bustle — Sign Up For The Newsletter