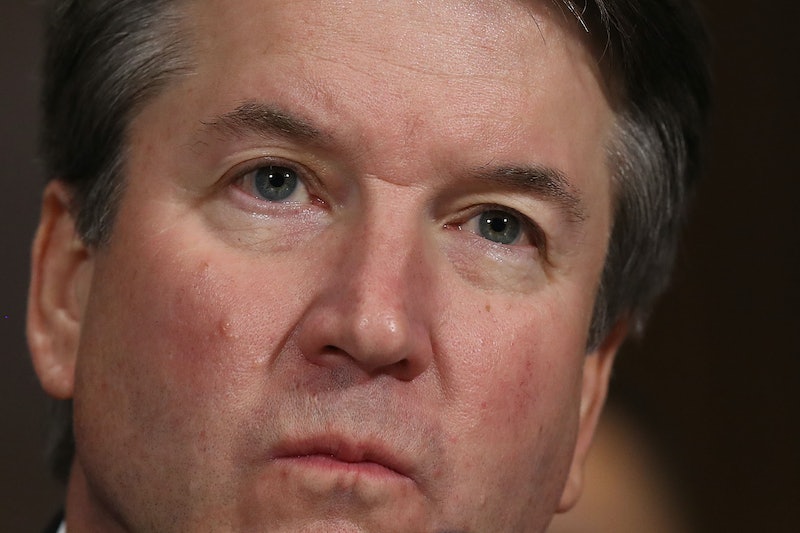 The drama surrounding the FBI investigation into Judge Brett Kavanaugh did not end on Friday when Sen. Jeff Flake suddenly called for a one-week investigation "limited in time and scope to the current allegations that are there" before a floor vote on Trump's SCOTUS nominee. On Saturday, news reports described limits on the FBI's Kavanaugh investigation, and how that will affect the inquiry.

The first reports on Saturday by The Wall Street Journal and NBC News — refuted by President Donald Trump — suggested that the limited scope would make it difficult to pursue any new leads, even the allegations made by Julie Swetnick that she had seen Kavanaugh mistreat women at high school parties. Kavanaugh denies all the allegations made against him, including Swetnick's. Bustle has reached out to him for additional comment.

The president was quick to fight back and say that the FBI had "free rein" on Saturday night. But The New York Times report on the matter shows exactly what those limits are and how they could keep new information from coming out. Just four people will be interviewed in coming days — and all the former classmates who have spoken out about Kavanaugh's drinking and partying have been excluded. The other key limit is that it's a background check and not a criminal investigation.

Trump tweeted on the matter, late Saturday night. "NBC News incorrectly reported (as usual) that I was limiting the FBI investigation of Judge Kavanaugh, and witnesses, only to certain people," the president wrote. "Actually, I want them to interview whoever they deem appropriate, at their discretion. Please correct your reporting!" The New York Times reported that this means that the investigation can be expanded if the first four interviews suggest it's necessary.

The paper also addressed the Swetnick allegations and reported that they will be included, at least in one interview. The FBI will speak to Mark Judge, Kavanaugh's friend who Dr. Christine Blasey Ford alleges was in the room during her sexual assault.

That name came up regularly in the confirmation hearings last week as someone Democrats would like to question to try and further investigate Ford's claims. The FBI will also ask him about Swetnick, who alleges that Judge was at the parties where she saw Kavanaugh act inappropriately. Kavanaugh has denied Swetnick's allegations and Bustle has reached out to him for additional comment.

The other three witnesses are Leland Keyser, a friend Ford said was at the party but who has gone on the record saying she doesn't recall the incident; P.J. Smyth, another Kavanaugh friend allegedly at the party; and Deborah Ramirez, the second Kavanaugh accuser, who said he exposed himself to her in a college dorm while both were at Yale and playing a drinking game — allegations Kavanaugh has also denied.

The limited list of witnesses for the background check comes from Senate Republicans, who wrote it. Senate Majority Leader Mitch McConnell then shared it with the White House. Depending on what the initial FBI findings show, the White House could expand the scope.

The veracity of Kavanaugh's testimony regarding his alcohol use in high school and college will not be an immediate focus. "I drank beer with my friends,” Kavanaugh said Thursday during the confirmation hearing. "Almost everyone did. Sometimes I had too many beers. Sometimes others did. I liked beer. I still like beer. But I did not drink beer to the point of blacking out."

That version of events has been challenged by classmates in the media, but currently will not be looked into by the FBI.