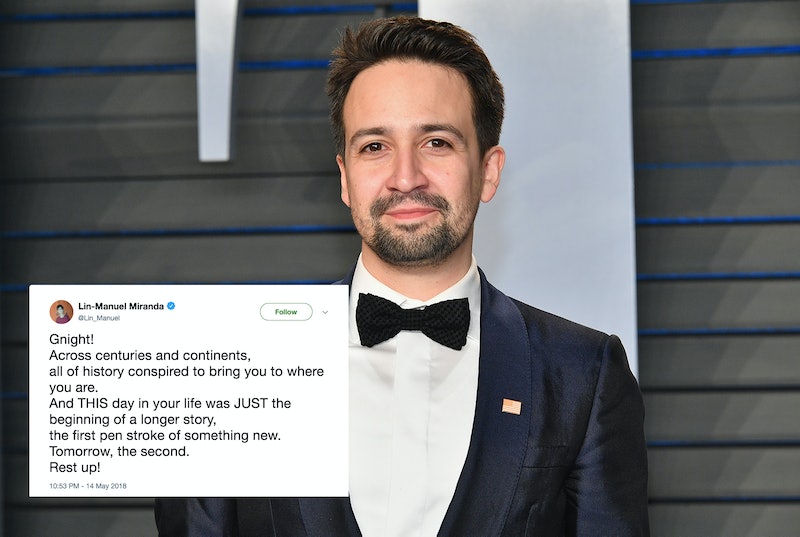 Hamilton writer Lin-Manuel Miranda has worn many hats: playwright, actor, rapper, song-writer, activist, multi-award-winner, verifiable genius — and, of course, Really Good Twitter User. OK, so that one might be up for debate, but not if you ask his 2.6 million Twitter followers. Miranda's social media presence on the platform has long been a source of inspiration to many who follow him, as he uses the 280 characters to share personal memories from his musicals In The Heights and Hamilton, go behind-the-scenes of his creative process, and spill silly anecdotes about his life. But it is his "Good Morning/Good Night" tweets that have had such a hugely popular impact he might be turning them into a book — at least, that is, if the results of Miranda's recent Twitter poll is any indication.

On May 17, he took to the platform to ask his followers, "Do you want a book of these Gmorning/Gnight tweets? (Genuinely asking)" and with 70% of the over 31,000 responses in the affirmative, it seems that Miranda might be adding author to his long list of accolades. For those unaware, almost every morning and evening, Miranda takes to Twitter to pen a tweet wishing his followers a good day or good night, with a serious dose of positivity and motivation to go along with it.

Check out a couple of my recent favorites below:

With retweet and like counts that can rise up around 50,000, it's obvious that these tweets have struck a chord with people — and it's not exactly hard to imagine why. It's been a tumultuous half a year, and it seems you can't go a single day without something bad happening in the news, all being replayed on an endless loop on social media. Although Miranda uses his account to share causes he believes in (particularly in the aftermath of Hurricane Maria in Puerto Rico) for the most part his is one of the few pages one can turn to if they're looking for good jolt of positivity and inspiration.

And it's clear that Miranda knows exactly what his followers want, because when he reached out to ask if anyone would be interested in a book compiling his beloved tweets, the response was overwhelmingly positive.

And if Miranda sticks to his usual track record of making mind-blowingly incredible things, something tells me that this book will be so much more than just plain ol' hardcover compilation of already-seen-before tweets. And Miranda's other fans clearly have the same amount of enthusiasm I do about the whole endeavour.

Of course, there is no word yet when the book will be released, what it will be titled, and where it will be published. So now, we wait. But while we do, Miranda is still doling out some A+ tweets every day on his account for free. Head over to @Lin_Manuel and give him a follow if you don't want to miss getting on the ground floor of his next big idea.