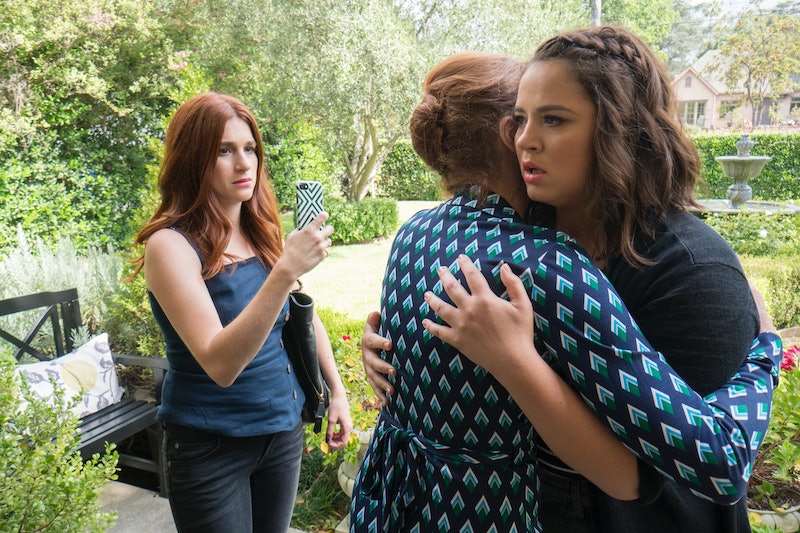 If, in Season 1, almost all the characters on You’re The Worst were stuck in some weird state of arrested development, by Season 4, they've definitely made moves. Whether they’re the right moves, though, remains to be seen. Adulthood is catching up with Gretchen, Jimmy, Lindsay, and Edgar, and part of adulthood is realizing that the world can, at times, be a dark, unfair place. That realization is tough — it’s like when it first dawned on you that your parents were regular old humans, capable of making mistakes (and plenty of them, if you're Becca and Lindsay.) You either learn from it or you’re broken by it, and in the Oct. 25 episode of You’re The Worst, the facts of adulthood are hard to stomach.

Gretchen and Jimmy are still broken up, even though it’s clear they still want each other. In the Oct. 18 episode, Gretchen decides to “go down a road” with Boone and then promptly calls Jimmy and talks all night long, which her shrink would have said meant that she shouldn’t “go down a road” with Boone. That’s what I would say, too. But in the morning light, Edgar tells Jimmy that Gretchen had Boone over the house (with “his spawn”), and Jimmy decides that he needs to get some sex with someone who would be easy to sleep with because he’s so impressive now. This sounds like a standard Jimmy plan, doesn’t it? He does go through with it, even though the women he invites over isn’t that into it, and Gretchen sees it all happening.

Across town, Lindsay thinks that it’s Becca who's ruined her life and made her into an "adult baby," so she goes (with Gretchen in tow) to Becca’s house to chew her out. (Gretchen wants to film the fight for Worldstar.com.) Lindsay is surprised to see their mother with Becca, and that opens up a whole other world of issues. Their mother is a narcissist, and it shows. When Lindsay tries to start her diatribe condemning Becca, Becca is all, “Uh-uh, look at yourself in the mirror, toots.” But as they watch old home movies, Gretchen points out that their mother never paid any attention to either of her daughters. And Gretchen is right. Becca and Lindsay have a cry and come together — one of the few moments on the show where we’ve seen them bond as sisters. Both recognize that their lives are crappy because their foundation was crappy, and only the other can truly understand what it was like to grow up the way they did.

Meanwhilde, Edgar is coming to terms with the fact that he has money now, since he’s a successful comedy writer and all. After ordering some food with his crappy friend, Edgar opens the door to find that the delivery man is someone he served in Iraq with. They buried a camel together. Seriously. Edgar acts like he doesn’t know him, because Edgar doesn’t like to share his service with “civvies,” he says, and the delivery man takes umbrage at this. It all ends in Edgar humiliating his old friend, forcing him to spread his chimichurri sauce on his steak in exchange for $50 and a five-star review.

Gretchen and Jimmy are stuck in flux with each other, but they’re learning (very slowly) what they want. They just have to admit it to themselves. Lindsay has been on a rollercoaster since divorcing Paul, but she’s also learning that she must take responsibility for her own actions. She and Becca can blame their mother for everything, or they can get over it, and it seems that Lindsay has chosen the latter by the end of the episode. Lindsay knows now that life isn’t fair, but she’s grappling with it.

This adult realization, though, is turning Edgar into the darkest version of himself. There was a time where Edgar was a heroin-addicted homeless veteran, and now he’s on easy street. But instead of wanting to help others who were and are in his position (like his delivery man friend), Edgar pushes it all as far away from him as possible. He can’t and won’t help because he’s afraid that his new living situation is untenable. The bigger he becomes, the more he can’t believe how big he is. He doesn’t want his old life to trickle into his new life, and in doing so, Edgar is losing his humanity, becoming harder in a city that usually makes people soft. This is a tragedy because Edgar has frequently demonstrated himself to be the show’s most human character.

You’re The Worst has progressed from dark romantic comedy to very dark dramedy, and here, the characters are all at breaking points — do they accept the darkness? Or do they move on with their lives? There is hope for all, but Edgar’s path on You’re The Worst is the most worrisome.

More like this
How Much Are The 'Schitt’s Creek' Stars Worth?
By Hugh McIntyre
The ‘Kevin Can F**k Himself’ Season 2 Finale Twist Is A Full Circle Moment
By Grace Wehniainen
These Memes & Tweets About Alicent in 'House Of The Dragon' Prove She's The Queen Of Messiness
By Grace Wehniainen
Did 'Grey’s Anatomy' Just Drop A Major Taylor Swift Easter Egg?
By Grace Wehniainen
Get Even More From Bustle — Sign Up For The Newsletter