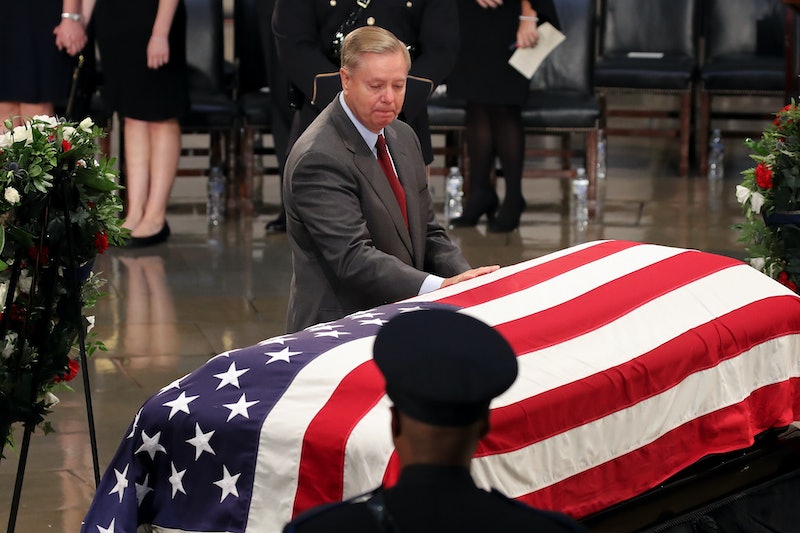 A longtime friend of John McCain has defended the late Arizona senator's daughter after she used a eulogy for her father to offer up some not-so subtle criticisms of President Donald Trump. Sen. Lindsey Graham weighed in on Meghan McCain's eulogy Sunday in an interview with CNN, saying the daytime talk show co-host "is her father's daughter."

"She is her father's daughter," CNN reported Graham said of Meghan during an appearance Sunday on State of the Union. He went on to say that, like her father, Meghan isn't afraid to call people out. "If you say something bad about her dad, you will know it, whether you're the janitor or the President of the United States," he said.

On Saturday, Meghan offered up some pointed criticism of President Trump while delivering an emotional eulogy at a memorial service held for her father at Washington National Cathedral in Washington, D.C. "The America of John McCain has no need to be made great again, because America was always great," The Washington Post reported Meghan said, referencing Trump's popular campaign slogan, "Make America Great Again."

Although Meghan didn't mention or address President Trump directly in her eulogy, it was hard to miss the clues as to where her criticism was being directed. At one point she said her father represented "American greatness."

"The real thing," she added. "Not cheap rhetoric from men who will never come near the sacrifice he gave so willingly, nor the opportunistic appropriation of those who lived lives of comfort and privilege while he suffered and served."

Her comment was, as The Washington Post pointed out, likely a swipe at Trump's four military deferments. McCain on the other hand, served in the U.S. Navy for more than 20 years and fought in the Vietnam War.

President Trump, who was not invited to any of McCain's memorial services, appeared to respond to Meghan's criticisms later in the day with a simple "MAKE AMERICA GREAT AGAIN!" tweet.

Trump and McCain were known to have a strained and sometimes combative relationship, often disagreeing quite publicly on policy issues. In 2015, after McCain criticized then-candidate Trump's rhetoric on immigration, Trump claimed McCain was "not a war hero" because he'd been captured and tortured as a prisoner of war. The two politicians continued to clash throughout the 2016 presidential campaign and well into Trump's presidency. In 2017, McCain further frustrated Trump when he cast the vote that officially killed the president's efforts to repeal Obamacare.

"We had our disagreements and they were very strong disagreements," Trump recently said of McCain in an interview with Bloomberg News. "I disagreed with many of the things that I assume he believed in."

On Sunday, however, Graham didn't seem to have been bothered by Meghan using her father's eulogy to purportedly criticize Trump. "I am just so proud of the young lady she has become so I am totally okay with everything," he told CNN's State of the Union. "She is grieving for the father she adored. I think most Americans understand that."