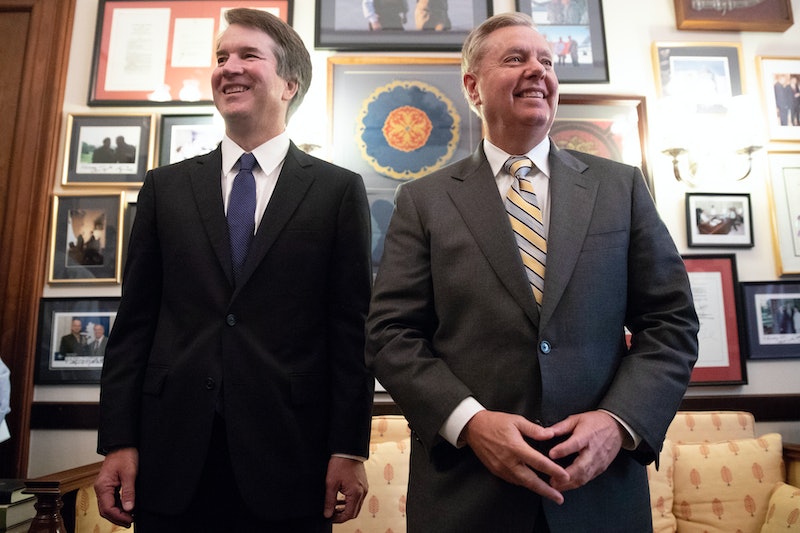 During the third day of the Senate confirmation hearings for Brett Kavanaugh, Sen. Lindsey Graham's abortion remarks were nothing short of alarming. The comments came several hours into the day, and seemed to even catch Kavanaugh himself off-guard. Perhaps the most surprising point Graham made was when he argued, "I don't remember [abortion] being a part of American history."

Graham said, "Is there any phrase in the Constitution about abortion?"

Kavanaugh replied, "The Supreme Court has found it under the Liberty Clause," then continued to explain but Graham cut him off.

"Is there anything in the Liberty Clause about abortion?" he asked.

"The Liberty Clause refers to liberty," Kavanaugh replied, smiling, then Graham replied, "The last time I checked, liberty didn't equate to abortion. The Supreme Court said it did, but here's the point: what are the limits on this concept? You have five, six, seven, eight, nine judges. What are the limits on the ability of the court to find a number of rights that apply to a particular situation? What are the checks and balances ... to confer a right based on this concept of a number of rights?"

Graham then went on to ask again if the practice of abortion was "part of our history," to which Kavanaugh replied, "The Supreme Court precedent has recognized the right to abortion."

But it didn't stop there.

Slowly, Graham worked with Kavanaugh to get to the breakdown of how Roe v. Wade was established: the Supreme Court found that a woman’s right to an abortion had to do with the the “penumbra of rights” around the definition of “liberty," rather than any explicit connection.

Graham then said, “You got one word (liberty) that has opened up the ability for five people (on the Supreme Court) to tell everybody elected in the country, ‘You can’t go there,’ that this is off limits in the democratic process, whether you agree with Roe v. Wade or not."

According to The News Tribune, Graham later confirmed that his dialogue with Kavanaugh was a very intentional effort to have a real conversation going around Roe v. Wade, and that he agreed with many scholars who believe that Roe v. Wade was founded on too loose of an understanding of the word liberty.

Of course, the Democratic senators of the hearing were not interested in this argument, and have been arguing the opposite opinion since the hearing started. They believe that abortion (and all women's reproductive health matters) is a basic human right.

Earlier in the confirmation hearing, Sen. Kamala Harris took a different approach with Kavanaugh. She asked him, "Can you think of any laws that give government the power to make decisions about the male body?"

After requiring Harris to further clarify her question and even repeat it verbatim, Kavanaugh finally said to Harris, "I'm not thinking of any right now, Senator."