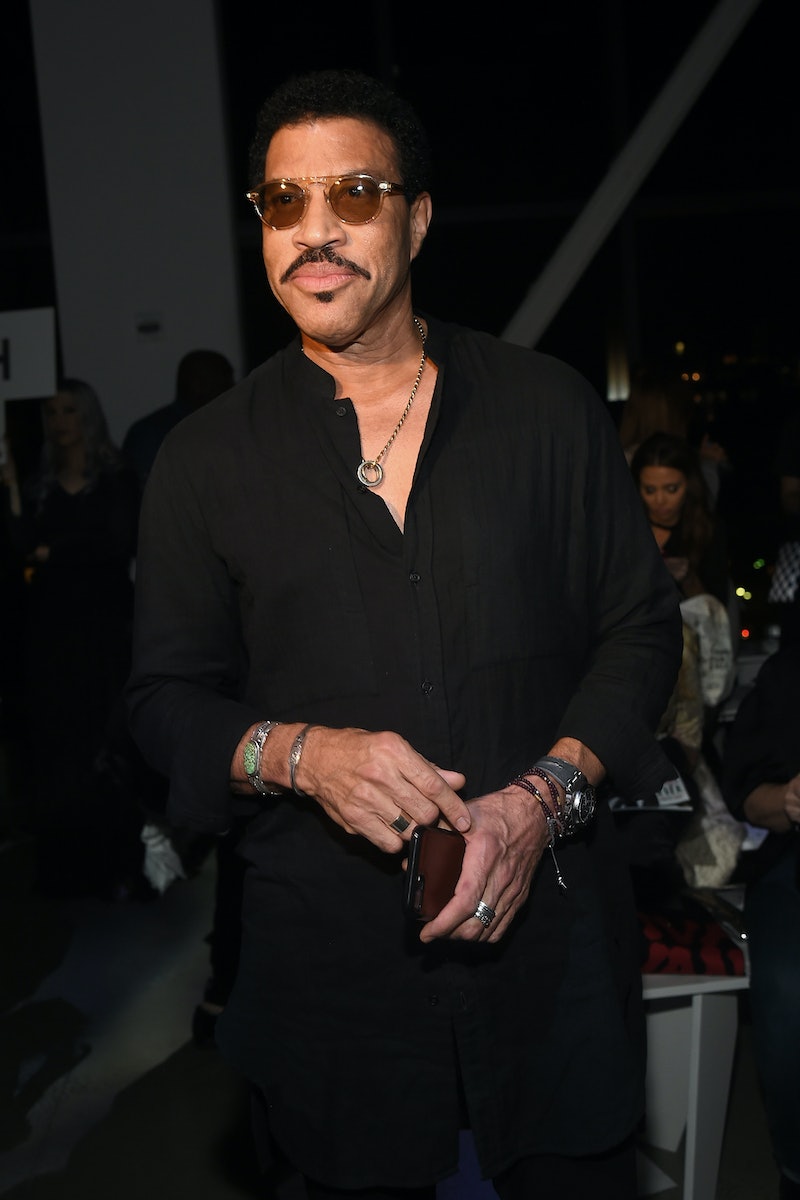 Ever since romance rumors involving Scott Disick and Sofia Richie began, there have been many reactions. Now, Lionel Richie's response to Disick and Sofia's relationship joins the list. While chatting with Us Weekly on Wednesday at the American Idol auditions (he is one of the new judges for the reboot), the famed singer didn't seem to hold back his opinions about who his daughter is keeping company with.

"Have I been in shock?! I'm the dad, come on,” he told Us Weekly. After being asked if he was happy for them, he responded, "I’m scared to death, are you kidding me?” (Bustle reached out to Lionel's reps for further clarification on these comments, but did not receive an immediate response.)

Much criticism has come with the 34-year-old Keeping Up With the Kardashians star reportedly dating 19-year-old Sofia. When rumors surrounding them as a couple first began in May during the Cannes Film Festival, Sofia tweeted, "Just so everyone can get their panties out of their asses, Scott and I are just homies #relax." Since then, neither of them have officially confirmed their status.

However, based on a Snapchat featuring a congratulatory dessert, seemingly making things Instagram official, and photos of the two kissing in Miami, there's no denying these two are more than just friends. Bustle has reached out to both Disick and Sofia's reps for comment about whether or not they're dating, but has yet to receive a response.

Similar to what it appears Lionel is expressing, a lot of people are concerned about Sofia and Disick as a couple, especially because of their age difference. For those unaware, Disick's known for hanging out with women who are a lot younger than he is. Even Kourtney Kardashian is dating someone, Younes Bendjima, who is 14 years younger than she is, but tends to receive less flack for it.

As for whatever is going on with Sofia, yes, there is a 15-year age gap, but both of she and Disick are allowed to date who they want. Sofia is technically an adult, so if she wants to date someone well above her age, then that's her choice. Although, it's hard to get around how much younger she is. Disick has also lived a lot more life than she has and is a father to three children. Plus, he doesn't have the best track record when it comes to partying, so for Sofia to possibly be dating Disick, well, it's understandable why there is concern.

More often than not, many people can't help but find issue with these two seeing one another. "I am really not okay with the whole Scott Disick (34) and Sofia Ritchie (19) thing !! She is closer in age to his son than him," one individual tweeted Wednesday. Another person wrote, "Scott’s 34 year old creepy self is really out here with Sofia’s 19 year old self sneaking her into clubs and sh*t. I’m calling the police." Someone else took to Twitter and posted, "I really think it's gross Scott is dating Sofia. Literally old enough to be her dad. Gross."

Seeing as Lionel and Sofia are super close, it makes sense that he only wants the best for his daughter in all areas of her life. If you take a moment to scroll through both of their Instagrams, it's obvious just how tight their bond is. On Sunday, next to a picture of the "Hello" singer ascending a private jet, Sofia wrote: "A true rockstar. So proud to call you my dad.. love you @lionelrichie #americasidol."

To put their relationship into further perspective, in May, Sofia tweeted: "My dad tracks my phone once a day. Awkwardly enough I get a notification every time. I think it's funny so I don't tell him I know." It's unclear if she was joking or if Lionel still does that, but there's no getting around the fact that they are very well immersed in each other's lives.

It probably doesn't matter who Sofia is dating or how old they are for Lionel to want to make sure she is seeing someone worthy of the wonderful woman he clearly recognizes her as. That's what parents do, no matter their child's age.

More like this
The 'Love Island' Wedding Mystery That No One Saw Coming
By Darshita Goyal
Gigi Hadid’s Dad Shared What He Knows About Those Leonardo DiCaprio Rumors
By Brad Witter
Who Is Nick Cannon Dating & How Many Kids Does He Have?
By Jordyn Tilchen and Radhika Menon
Rhys Ifans Has A Good Reason For Keeping His Love Life On The DL
By Maxine Harrison
Get Even More From Bustle — Sign Up For The Newsletter