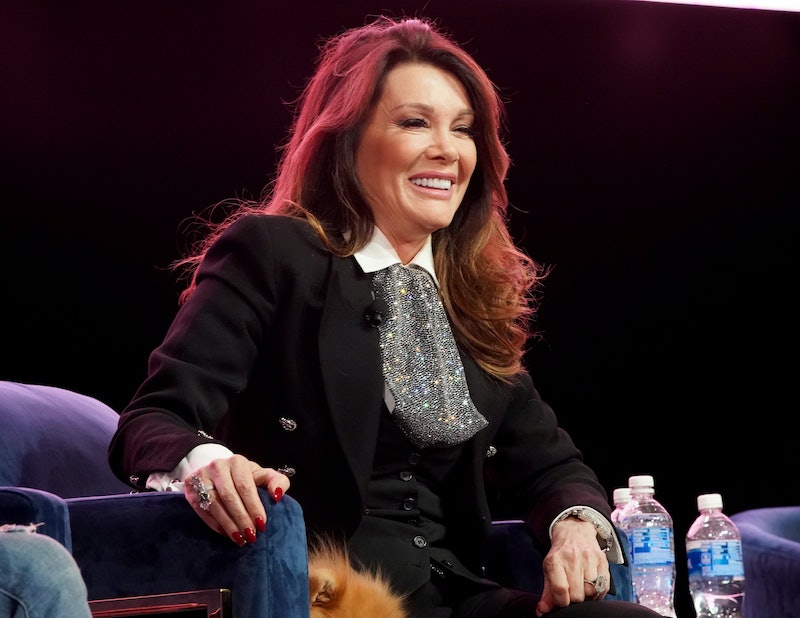 The original cast members on Vanderpump Rules are entering a new stage in their lives. They're having expensive, lavish destination weddings, buying nearly identical $2 million dollar houses in the Valley, and almost none of them work at SUR anymore. But while the show started out following employees at her restaurant, Lisa Vanderpump isn't worried that the Vanderpump Rules cast no longer serves goat cheese balls or shakes up Pump-tinis on the regular. Mostly, she's happy to see her employees evolve, as well as the show itself, thanks in large part to the new cast members on Pump Rules Season 8 — cast members who still do need to fight for more hours and eat their shift meals next to a dumpster.

"Of course, we have to see them grow up, we have to," Vanderpump tells me of the original crew at the first ever BravoCon in New York City on Nov. 16. "Otherwise it'd be too frustrating." She adds with a laugh that it's been "frustrating enough" watching them all (very slowly) go through the growing pains of even getting to this point.

As entertaining as it is, watching the same thirty-somethings repeatedly cheat on their partners, spread rumors about their friends, party themselves into oblivion, and casually shoplift eventually just becomes, well, sad to some viewers. But it's also kind of offensive to assume that fans will continue, no-questions-asked, to watch this clique pretend to work a lunch shift at SUR when they are very clearly making reality TV money. (Not to mention securing book deals, making paid sponsorship appearances, and just generally being celebrities.)

The Season 8 premiere, which screened at BravoCon following a panel with the cast at an at-capacity Hammerstein Ballroom in Manhattan, brings more authenticity to the series in this regard. While the episode is full of plenty of the same antics fans are used to — Scheana Marie hitting on the new guys, Kristen Doute dealing with her difficult then-boyfriend Brian Carter — most of the action revolves around several key cast members moving into expensive new homes. Only two people from the original cast — Scheana and Jax Taylor — still technically work at SUR.

Enter Dayna Kathan, Max Boyes, Brett Caprioni, Charli Burnett, and Danica Dow, five new cast members who work at SUR or TomTom, and are ready to get in the mix. (Jax already called them "thirsty" at the BravoCon panel, which is bound to make for great TV.) These new cast members bring the ensemble to a total of 19 people this season, and as supervising producer Bill Langworthy noted at the "The Real Tea with Bravo Producers" panel at BravoCon, that means there are way more parties, fights, and hungover heart to hearts than in previous seasons.

But that doesn't mean that the original cast has outgrown Pump Rules, as Vanderpump sees it. Just because they've moved on from the restaurant and are buying homes in the Valley doesn't mean the OGs are going anywhere just yet.

"They're still very much part of Vanderpump Rules," she says of the cast who kicked off the show nearly seven years ago. "I think there's still enough cohesion and ties to SUR." She points to the fact that, in addition to Marie and Taylor, James Kennedy DJs at SUR and his hilariously controversial girlfriend, Raquel Leviss, is now a server. Tom Schwartz and Sandoval also serve as a big part of the connective tissue as they're helping run the show at their own restaurant. "Right now it works. I'd say it works very well," Vanderpump adds.

Clearly, though, the new faces were brought in to keep things close to SUR and to stir up some pre-homeowner Pump Rules drama. Regarding the brand new cast members, Vanderpump explains, "It's nice to have new blood, because it keeps things exciting. It keeps things moving." It's also only natural, because the restaurant — being an actual, functioning restaurant — does hire new employees.

"It would be kind of ridiculous, really, to cut people out when they're there and they're integrated with the cast and each other and they have their own issues," she says. Vanderpump adds that "not everybody wants to film," so cast members who are "willing and able" to do sidework and film their personal lives is not a bad deal. It also means that fans (and Jax) should start getting used to having some of the newbies around on their cast trips.

And if not, then the future of Vanderpump Rules will play out in one of couple theoretical ways: The older cast members are phased out as new ones continue to join, or we continue to watch the original gang's lives unfold until they're throwing graduation parties for their kids in those big yards they all have now. Either way, it's hard to imagine exactly when or how Vanderpump Rules will end, and it's just as difficult for Vanderpump.

"I remember after the first season of Housewives, on the second season I said, 'Oh, that's it. I think I'll do something else now.' I didn't imagine I'd do 400 episodes of reality television, so who knows. I don't think Bravo ever envisaged that it would go for eight seasons, but if you've got something that works, you just keep it going, don't you?" Then, she adds in her very LVP way, "But it’ll be a sad day, and, of course, it will come to an end at some point. Hey, what am I going to do, walk in through those doors and the title's on a Zimmer frame? I mean, come on. It’d be Vanderpump Drools, not Vanderpump Rules."

More like this
Zach Reveals The Chaotic 30 Minutes That Were Cut From ‘The Bachelor’ Premiere
By Grace Wehniainen
'Bling Empire: New York’ Star Dorothy Wang Wants To Try 'The Simple Life'
By Alyssa Lapid
Kaitlyn Bristowe Said Chris Harrison Ignored Her After Her 'Bachelorette' Hosting Gig
By Grace Wehniainen
Airris From 'MAFS' Says He Doesn’t Regret Going To Decision Day With Jasmine
By Brad Witter
Get Even More From Bustle — Sign Up For The Newsletter
From hair trends to relationship advice, our daily newsletter has everything you need to sound like a person who’s on TikTok, even if you aren’t.