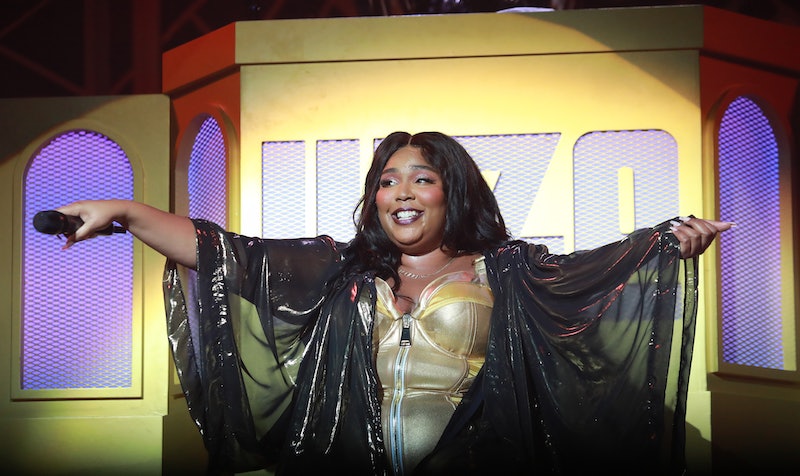 If anyone is feeling good as hell right now, it's Lizzo. The champion of self love, creator of bops, and style goddess has a brand new magazine cover, and it's major. Lizzo's British Vogue cover just hit the internet, and it's yet another must-see moment from the star.

On Nov. 7, Lizzo took to her Instagram to announce that she's the second of two cover stars for British Vogue's December issue. For the image, Lizzo went full vintage glamour with a feather boa, strapless, deeply cut sweetheart neck Versace gown, and no less than Tiffany & Co. and Chopard diamonds. No big deal, right?

She went on to post more than just the cover image, though. While she thanked both the publication as a whole and editor Edward Enniful, a glance at her Instagram feed now reveals a multitude of images from her spread inside the magazine with captions you've got to read. Each new slide is a celebration of her cover, and they include one that's a low-key read of people who may judge her for the posting spam. In a post of her rocking a stunningly bold black and white patterned gown, she wrote, "You thought I wasn’t gonna post every single shot?"

Perhaps most importantly, though, she took time to acknowledge her position as a plus size, black woman on a Vogue cover writing in a caption, "Big black girls, if you’re reading this... you’re a cover star. Nothin less. Period Pooh. Fin bitch. Thank you."

As part of her work with Vouge, Lizzo also starred in the magazine's "My First" series which sees celebrities reveal, well, their firsts. In the quick YouTube video, she gave a behind the scenes peek at her time shooting the cover. When asked what the first thing she does after a night out is, she answered, "The first thing I do after a night out is I shoot the cover of British Vogue...cause I'm hungover."

You've got to love her.

The "Truth Hurts" singer's cover comes after an already impressive year. In 2019, she scored a song in the top 10 of Billboard's Hot 100 that has remained there, performed at the MTV Video Music Awards and BET Awards, attended the Met Gala, and got the stamp of 100% that b*tchness from none other than Rihanna. Now, it's British Vogue.

If you were wondering who's 100% that b*tch? It's definitely Lizzo, though you probably should have already known that.