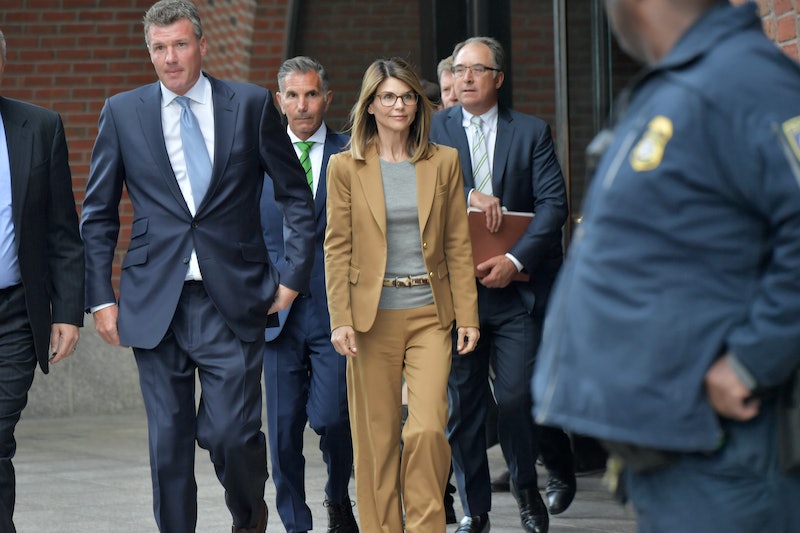 On Monday, The New York Times reported that according to court filings, Lori Loughlin is pleading not guilty in the college admissions scam.

The case came to light in March, when the FBI released charges against a number of wealthy parents, including actresses and CEOs, who had allegedly paid bribes ranging from under $10,000 to $6 million in order to get their children into prestigious colleges. Loughlin, one of the most well-known defendants, was charged with conspiracy to commit wire and mail fraud along with her husband, fashion designer Mossimo Giannulli. The two of them are alleged to have paid $500,000 to get their daughters into the University of Southern California as future members of the rowing team, despite the fact that neither of the girls was actually a rower.

Even after many of the other defendants targeted in what the FBI referred to as "Operation Varsity Blues" entered guilty pleas, Loughlin and Giannulli opted not to, despite the fact that it came with risk of a higher sentence in terms of both fines and potential jail time.

According to The New York Times, Loughlin declined to come to court for her arraignment, and she has still not given a public statement about the charges against her.

As it stands right now, Loughlin and Giannulli could face up to 20 years in prison for each of the charges against them, although according to the Associated Press, it's unlikely for first-time offenders to be handed such a long jail sentence. If their court case ends with a guilty verdict, Loughlin and Giannulli could receive a minimum sentence of two years in prison, according to TMZ.

Although Loughlin made headlines by signing autographs on the way to her first court appearance and generally appearing very upbeat, her career has already taken a hit in the wake of this scandal. The Hallmark Channel announced last month that it would no longer work with Loughlin. Her daughter, Olivia Jade Giannulli, has also faced some ramifications; she and her sister Isabella Giannulli will reportedly not be returning to the USC campus.

Olivia Jade had made a name for herself as an influencer, but her brand has taken a serious hit since the allegations came out — and according to a report from People, there's a good chance that she knew about her parents' actions on her behalf.

“Olivia is still distraught and embarrassed. She hasn’t been home much,” an anonymous source told People. “She is very angry with her parents. She just wants to figure out how she can rebuild her brand.”

Olivia Jade is still present on social media, although she hasn't posted on Twitter since before the charges were made public. Loughlin, however, deleted her social media accounts once the charges were out, and she has declined to provide any other information. She also hasn't apologized for her alleged role, unlike her fellow defendant Felicity Huffman.

This case — and Loughlin's alleged part in it — has already gripped the attention of millions. Now that Loughlin appears to have decided to fight back, it's unlikely that interest in this case will wane any time soon.

More like this
A New Portrait Shows King Charles With William & Kate Before The Queen’s Funeral
By Stephanie Topacio Long
Girls Aloud Announce Primark Collab In Honour Of Sarah Harding
By Sophie McEvoy
Mel B Speaks Out Against Domestic Violence In A Powerful Speech
By Sophie McEvoy
Who Is Nick Cannon Dating & How Many Kids Does He Have?
By Jordyn Tilchen and Radhika Menon
Get Even More From Bustle — Sign Up For The Newsletter