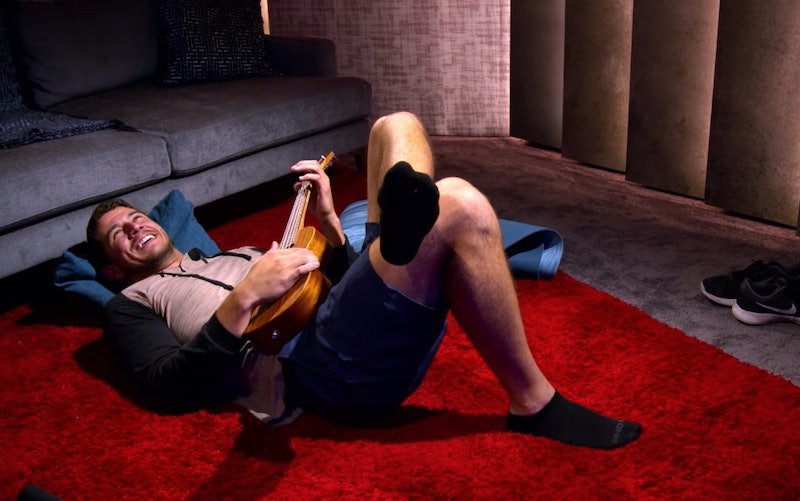 Unfortunately for the women interested in Barnett on Love Is Blind, they won't be able to see him, let alone check out his Instagram. The new Netflix series follows a group of singles quite literally blind-dating: they get to know each other while sitting in individual pods separated by an opaque partition, which means they're able to hear but not see the other person. Once they get engaged, they're finally able to meet face-to-face...and then head down the aisle a short four weeks later.

It's a wild concept, but one that seems to work for 27-year-old Barnett. He catches the eye (er, ear) of a few women early on, mostly for his goofy personality. That's something that comes across on his Instagram too. Regrettably, his handle is mrflex13, which is...a choice. But his posts are filled with exactly the type of frat boy humor that has apparently endeared him to the adult women on Love is Blind. In a post from last December, he posed in underwear emblazoned with Rick and Morty's Mr. Poopybutthole, and in one from April 2018, he made a balls joke at a historical site. He also seems to be always down for a good party.

There is, however, more to Barnett than a 13-year-old boy's sense of humor. He's an engineer who graduated from Georgia Tech in 2013, as well as a dedicated dog dad (he has a separate Instagram account for his very cute "wolf dog" Koda). Barnett also posts photos of his family — including his two brothers — and his athletic endeavors, like running 5Ks, snowboarding, and wakeboarding.

Barnett's silly side might not win over every woman he speaks to, but his Instagram shows that he definitely has a sense of humor and can offer a partner a life full of fun. Will that translate to finding a long-lasting marriage on a bonkers reality dating show? We'll soon find out.

More like this
‘The Ultimatum: Queer Love’ Is Officially On The Way
By Radhika Menon and Kadin Burnett
Here’s When You Can Expect More ‘Indian Matchmaking’
By Brad Witter
Here's How To Apply For 'Love Is Blind,' No Matter Where You Live In The US
By Grace Wehniainen
Kyle & Deepti Finally Revealed Their Relationship Status Post-'After The Altar'
By Grace Wehniainen
Get Even More From Bustle — Sign Up For The Newsletter