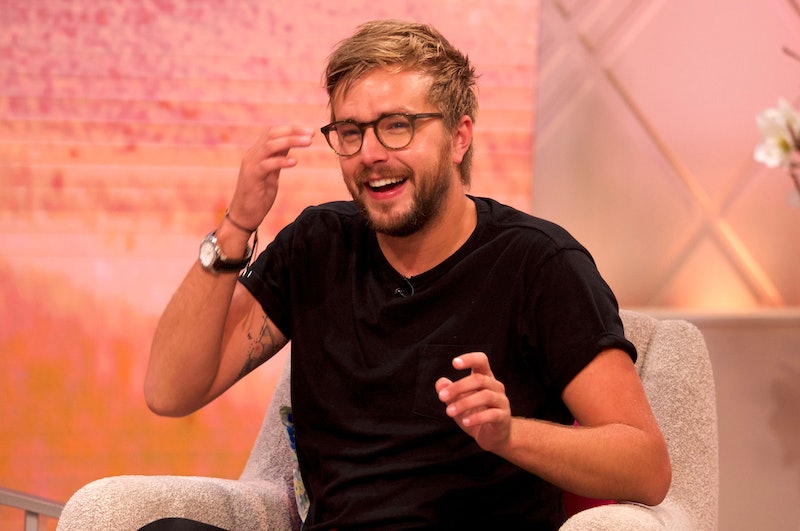 Get all your eggs in one basket and whack out your Do Bits Society merch, because it's nearly time for Love Island. While I'm sure you're itching to know who this year's contestants will be, I'm more excited to hear that beautiful Scottish voice narrate my summer. But it turns out the show could have been a lot different, as Iain Stirling turned down Love Island before being persuaded to take the gig.

Stirling appeared on Sunday Brunch yesterday morning (May 12), where he spoke to hosts Tim Lovejoy and Simon Rimmer about how he was chosen to narrate the show, and how he repeatedly turned it down. "I said no loads of times. I'm not really a reality TV guy, really — I never really got into it," he explained. "It films in June/July, which is so silly when you're a new comedian. It's just before the Edinburgh Fringe Festival."

This is also where he got headhunted in the first place, as his flatmate at the time (and fellow comedian) Phil Wang pointed out. "[H]e sort of said to me, 'Surely the reason you go to the festival is to get jobs like this.' And I've done it, and I've never looked back."

In an interview with The Telegraph in 2017, Stirling also explained how he felt he wouldn't be taken seriously if he were to take the job. "I didn't want to do it at first. I thought the broadsheets and Radio 4 wouldn't take me seriously if I was the voice of a reality TV show," he said. "Ironically, this is now the reason why these people want to talk to me."

Before Stirling first got into comedy, he actually studied for a law degree at the University of Edinburgh. As the presenter explained to The Telegraph, if it weren't for the fact that he was actually getting a few gigs and "getting absolutely nothing" from the law internships he was applying for, he wouldn't have gone into comedy in the first place.

Stirling does look back fondly on his time at uni, though. "I definitely enjoyed it and I am glad that I did university — four years of not being in the public eye — and I met all my best friends doing it, so I am definitely glad it happened," he told BBC Scotland in 2018. "I look back now and think there's no way I would be able to study for a law degree now."

Definitely not with the amount of work he has garnered since his Love Island debut in 2015. Already this year he's set to be a contestant on the eighth series of Taskmaster, and he's also part of a new Comedy Central series called Comedy Bus. Stirling will star alongside Joel Dommett, Suzi Ruffell, Tom Allen, Kiri Pritchard-Mclean, and Darren Harriott as they visit their hometowns.

As for his return to Love Island this year, which he described as "one of the best yet" on Sunday Brunch, ITV have yet to confirm an official date. But, Radio Times suggests that it will air on June 3, and it seems an announcement may be soon if the #DayDotIsComing adverts on ITV are anything to go by.

More like this
Molly-Mae Hague & Tommy Fury Celebrate Pregnancy Reveal In The Sweetest Way
By Sophie McEvoy and Sam Ramsden
What Exactly Is The Bish & Chips Show?
By Frances Stewart
How To Get Tickets To 'Strictly Come Dancing's Live Tour
By Sophie McEvoy
A Former 'Strictly Come Dancing' Pro Permanently Joins 'It Takes Two' Spin-Off
By El Hunt and Sam Ramsden
Get The Very Best Of Bustle/UK