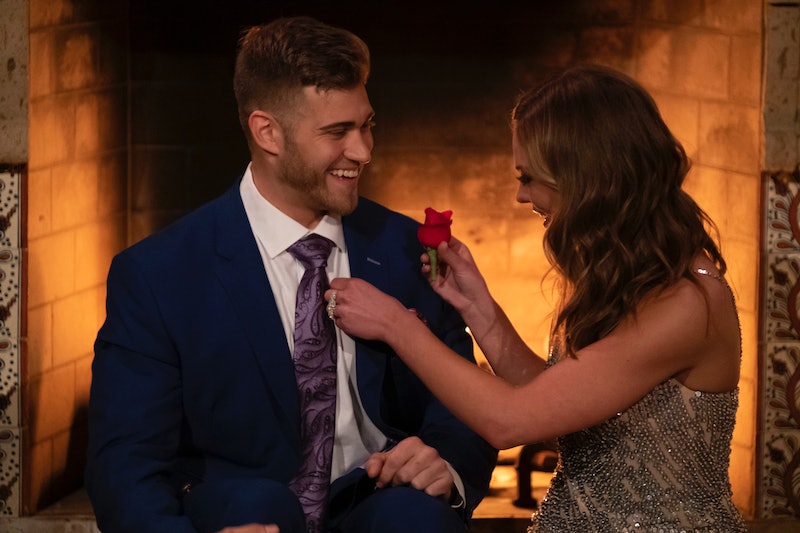 If Madison and Peter's Fantasy Suite conversation seemed incredibly familiar to Bachelor fans, they're not alone in feeling deja vu. On Wednesday, Feb. 26, Luke P. defended Madison's Fantasy Suite conversation on The Bachelor with an Instagram post that referenced the similarities to his own confrontation with Hannah Brown on The Bachelorette. "My face when the fantasy suite situation is too familiar," Luke wrote, alongside a photo of himself with his jaw dropped while competing at the Wodapalooza CrossFit Festival.

"With that being said I haven’t been watching this season," Luke continued — even adding the hashtag "#ican'twatchanymore" to underline the fact that he hasn't seen Peter's season of The Bachelor. However, Luke wrote that he "got the lowdown and I am proud of @madiprew for standing firm in her convictions. Keep doing you girl!"

Madison earned a lot of comparisons to Luke during the most recent episode of The Bachelor, after she pulled Peter aside ahead of the Fantasy Suite dates and told him that she "would have a hard time moving forward" with their relationship if he decided to sleep with Hannah Ann and Victoria F. Though she stressed that she didn't want to give him "an ultimatum," Madison later admitted that she didn't think she couldn't get engaged to someone who slept with another person a week before proposing.

Like Madison, Luke also struggled with the idea of Fantasy Suites as he also doesn't believe in having sex before marriage. However, his conversation with Hannah about being intimate with the other contestants took a much different, more judgmental turn. "I don't think that's something that you need to be doing," in the Fantasy Suites, he told Hannah, adding that if he found out that she did sleep with anyone else, "I would 100% want to go home." In response, Hannah called him out for his slut-shaming behavior and sent him home.

By contrast, Peter recently defended Madison and her decisions to Entertainment Tonight, explaining that he didn't think their conversation was the same as the one Luke had with Hannah. "I don't feel like it was an ultimatum. I don't," Peter said on Feb. 25. "I think it was her doing what I asked every girl to do from the very first night and that was to be honest with me and share what was ever on their heart. And that's what she did."

While he admitted that their conversation made things "difficult" for him that week, Peter told the outlet that instead of shaming him after the fact — as Luke did to Hannah — he felt Madison was just laying out her expectations for a relationship. "Trust me, it made it an insanely incredibly difficult week for me. There's no doubt about that," he said. "But I can't fault her for sharing her heart."

Luke's judgmental reaction to Hannah came after a long season of starting fights with the other men on The Bachelorette and was one of many times he expressed his views in a toxic manner on the show. By contrast, Madison admitted that she understood the situation Peter was in, but that "I don't know how to let go of the things that I need in a relationship."

Based on the preview for the next episode, it seems like Peter and Madison will resolve their conflict in a completely different way than Hannah and Luke's relationship ended. Of course, just how that resolution comes about remains to be seen in the final few episodes.