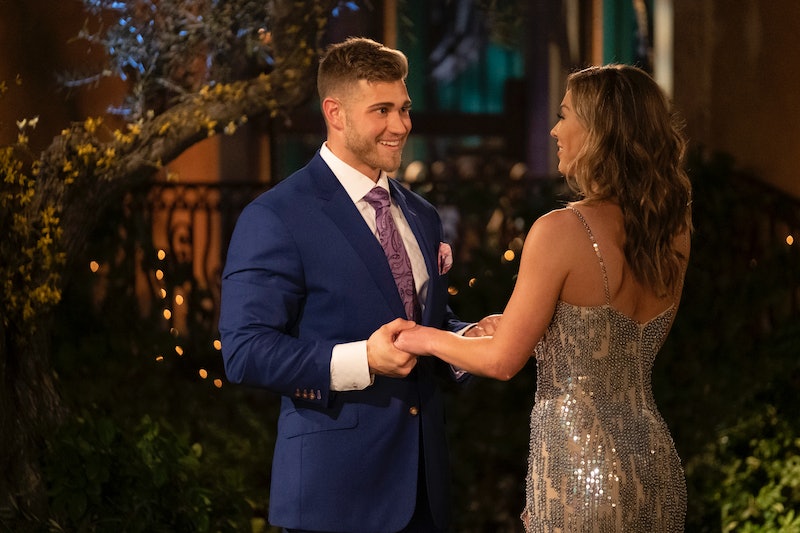 There are two Lukes on Hannah B.'s Bachelorette season, but Luke P. is the one who doesn't look like Nick Viall. It remains to be seen how Hannah fares with that other Luke, but Luke P. could have a fighting chance at winning Hannah's heart for a few reasons. Even his ABC bio is basically 'shipping the pair already. "Luke seems to be everything Hannah wants in a husband," it reads.

That "everything" seems to be that Luke has southern charm and a deep connection to his faith. According to his ABC bio, Luke is a 24-year-old from Gainesville, Georgia — so not too far from Hannah's Alabama hometown. He seemingly doesn't live there now, though, since Chris Harrison's video introduction of the men listed him as residing in Ponte Verda Beach, Florida. (That's OK, though. Those southern roots stick with you no matter where you move.) His ABC bio also calls him "a good Christian boy" who had a "religious awakening" in college. Tim Tebow is his hero.

Luke's commitment to his religion is evident from his Facebook page, where he constantly reposts video sermons from a page called Bucky Kennedy Ministries. His Instagram bio also reads, "Jesus + Nothing = Everything" and references Philippians 4:13. That verse reads, "I can do all things through Christ which strengtheneth me."

Basically, he is very into God and so is Hannah. Her own Instagram bio says, "I love Jesus with my whole heart." So they'll definitely have that to bond over. In fact, according to the photos from the first night, they do seem to get along quite quickly.

The Two Shared A Moment During The Toast

Later They Got Cozy While They Chatted

Her hand is on his thigh, and she seems fully engaged in their conversation. Seems like he's gonna be getting a rose on night one, for sure.

Luke's ABC bio says he's an import/export manager, but he has an athletic background too, according to his LinkedIn. He attended High Point University as well as Faulkner University for a degree in sports management. He played baseball at both universitie, and he was on the varsity team at Faulkner. His LinkedIn also lists his career as "entrepreneur" with CrossFit as his "part-time job."

But for all his seemingly perfect qualities on paper, Chris Harrison hinted in his video intro that Luke may be involved in a lot of drama this season.

When it came time to introduce Luke, Harrison suddenly went into a long monologue about how this was one of the most "man-drama" filled seasons. "I'm not saying if Luke is the cause of a lot of that, but I'm just saying that'd be a good time to slide that in," Harrison said, his eyes practically screaming that Luke was the cause of it.

Luke's ABC bio kind of hints at this too. Right after it says, "Luke seems to be everything Hannah wants in a husband," the bio follows it up with, "Is this a match made in heaven, or is it all too good to be true?" If we trust Harrison, it may be too good to be true. Sorry Hannah.