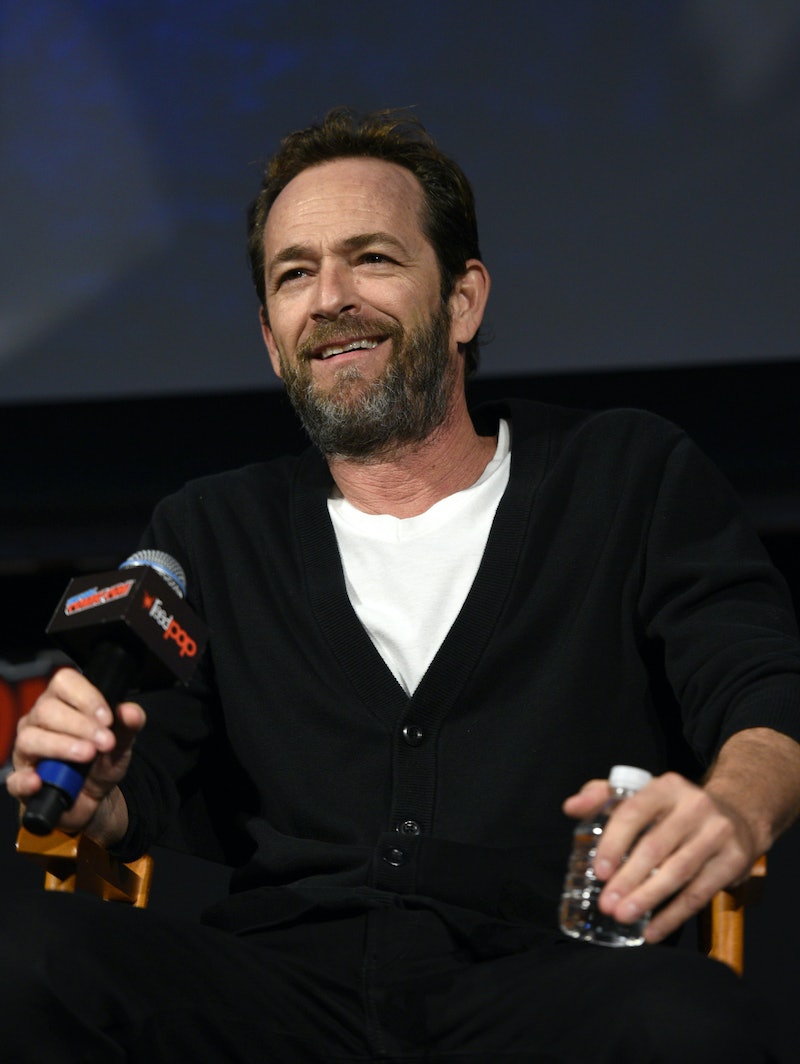 It's only been a little over two months since Luke Perry died at the age of 52 on March 4 after suffering a massive stroke. It understandably continues to be a difficult time for his loved ones, including his 18-year-old daughter who even came up with a special way to honor her late father. Perry's daughter Sophie got a tattoo in his memory, she revealed on her Instagram Story (via Us Weekly) on May 8.

Specifically, Sophie had a mushroom tattooed on the inside of her arm. "The mushroom is symbolic of my dad," she said. Actually, she revealed in an Instagram post on May 3 that Perry was buried in a "mushroom burial suit." Next to an image of mushrooms photographed at the Armstrong Redwoods State Natural Reserve, she explained why mushrooms now hold so much meaning to her family. Sophie shared,

"Any explanation i give will not do justice to the genius that is the mushroom burial suit, but it is essentially an eco friendly burial option via mushrooms. All i can say is that you should all look into them at coeio.com or just by googling 'mushroom burial suit'. My dad discovered it, and was more excited by this than I have ever seen him. He was buried in this suit, one of his final wishes. They are truly a beautiful thing for this beautiful planet, and I want to share it with all of you."

It makes complete sense why Sophie would want a mushroom tattooed on her arm. For her, it's not an uncomfortable or morbid way to remember Perry, but, rather a beautiful tribute to her father. Like she wrote in her mushroom Instagram,

"In December I went to San Francisco with two of my best friends. One of them, had never never been to California, so we went to show him the Redwoods. I took this picture while we were there, because i thought, 'damn, those mushrooms are beautiful.' Now, mushrooms hold an entirely new meaning for me."

This isn't the first time Sophie has honored the late Riverdale actor, either. She had a school named after him in Africa. Next to a photo of Sophie in front of the building, she beautifully revealed on Instagram on April 29 that not only did she help raise money for the school to be built, but that it was named the "Bvucco 'Luke' PreSchool." How wonderful is that?

Next to the image, she wrote a heartfelt thanks that read,

"thank you to everybody who donated to help with our projects! Our first school is finished and I can’t tell you how proud and excited I am to see it open on Wednesday. Thank you to my amazing partner Ruben for everything. Especially for fighting to name the school after my dad."

There's no doubt Perry would be honored by Sophie for having a school in Africa named after him, but also for her getting a permanent piece of artwork on her body in his memory. Losing a loved one, especially unexpectedly, is seriously hard and Sophie is doing all that she can to remember Perry in meaningful ways.