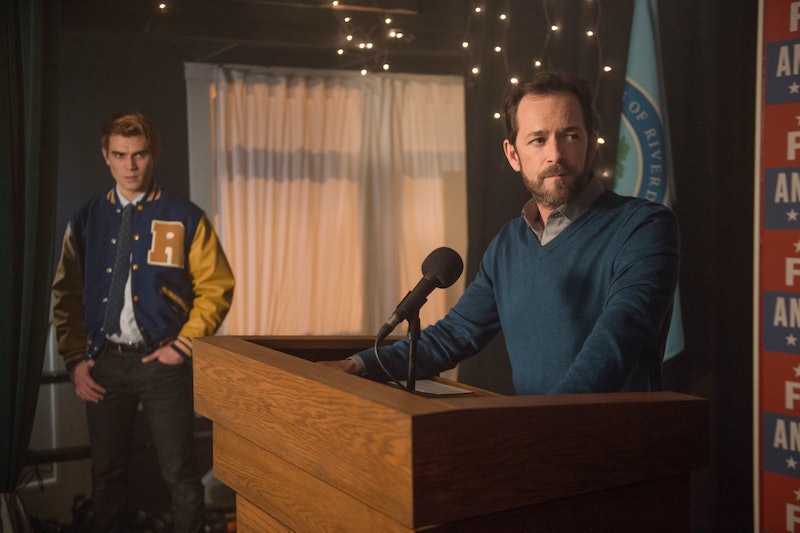 It's the end of an era. The absence of Luke Perry's Riverdale character, Fred Andrews, won't fully be addressed during the CW teen drama's May 15 Season 3 finale. However, as showrunner Roberto Aguirre-Sacasa recently told Variety, the show does plan to “honor Luke and explain what’s going on with Fred and why we haven’t seen him” at the start of next season.

“That was a decision we made partly because when Luke passed it was such a shock, and we were so sad — we were so bereft — and we knew we had to address it some way, but we didn’t want to get it wrong,” Aguirre-Sacasa added to Variety.

Perry's last appearance on Riverdale came during the series' April 24 episode, with a subsequent installment simply referencing that Fred had gone out of town. The sad farewell followed Perry's tragic March 4 death at age 52 from complications after suffering a massive stroke, as the actor's rep confirmed to Bustle at the time.

"This week’s #Riverdale is the last episode Luke filmed. As always, Fred’s imparting words of wisdom to Archie. A beautiful, true moment between a father and his son. Wish these scenes could go on forever...❤️🏆💎👨🏻‍💻," Aguirre-Sacasa tweeted on April 21, ahead of the episode airing.

According to the showrunner, Riverdale's writing team had already penned most of the season, when Perry died unexpectedly. Instead of scrambling to rearrange the plot, they all agreed that it didn't seem appropriate to write his character out of the show immediately. As Aguirre-Sacasa further explained, “It felt like trying to squeeze this in would have been a disservice.”

Instead, Fred's estranged wife, Mary Andrews (played by Molly Ringwald), stepped in to stay with their son Archie (KJ Apa). Aguirre-Sacasa revealed in the Variety interview that Ringwald offered to stay and help in any capacity that she could, and, as such, conversations are underway about her character "having a bigger presence on the show next season.”

For his part, Apa had previously predicted that his onscreen mother might appear on the show more to somewhat fill the void of Fred's departure. "We're definitely gonna obviously have to address it at some point," Apa said in an April interview with Entertainment Tonight. "[Possibly] that [means] Molly stepping in as more of an active parent for Archie, but that all depends on the availability of the actors around us. So, you know, we'll do what we can."

Either way, Apa said that Perry certainly will not be forgotten. "His legacy is gonna live on in the lives around him, that he worked with, you know?" he also shared with ET. "I'm never gonna forget him and I think it's still very fresh and we're all still dealing with it."

Indeed, in a separate ET interview conducted back in March, Aguirre-Sacasa explained how Perry's memory will live on within Riverdale: "His spirit, which was so generous and wise and vivacious, we hope will infuse every episode. So in my mind, every episode for the rest of time on Riverdale will have a bit of Luke in it."

It's clear that both Perry and Fred will live on in the hearts of their many fans worldwide.

More like this
How Much Are The 'Schitt’s Creek' Stars Worth?
By Hugh McIntyre
‘SNL’ Finally Spoofed Nicole Kidman’s Weirdly Beloved AMC Ad & Nailed It
By Stephanie Topacio Long
Jonathan Bailey’s BTS ‘Bridgerton’ Photos Celebrate 6 Months Of “Kanthony”
By Stephanie Topacio Long
'Inside Man' Was Inspired By 'Sherlock' In The Most Unexpected Way
By Catharina Cheung and Maxine Harrison
Get Even More From Bustle — Sign Up For The Newsletter