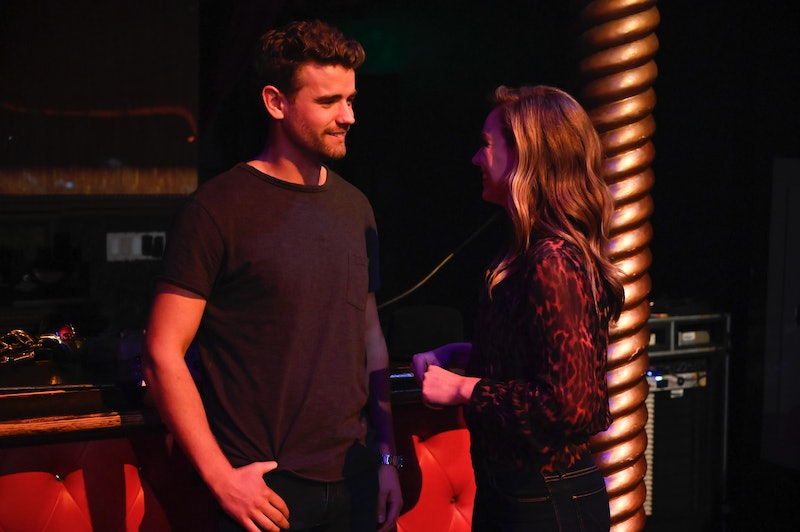 As you may have guessed, Luke S. from The Bachelorette isn't just a Nick Viall lookalike. For example, according to his ABC bio, he's a 29-year-old political consultant from Washington, D.C. who's also a "tequila expert and entrepreneur." We've only seen a little bit of him on the show so far, but Luke. S's Instagram shows off these eclectic interests. He may not have made the greatest first impression (remember that cringey After the Final Rose innuendo?), but there may be more to him yet.

After all, Luke's friends say "his perfect girl is a Southern belle with a quirky personality," per his ABC bio, which is pretty much Hannah to a T. And based on trailers for the rest of the season, he's definitely on track to become a major player this season, so clearly, there's a reason Hannah keeps him around — for better or for worse. He's shown telling people that he's "here for Hannah and don't you ever f*cking forget it," and, "I can take Hannah from you any time that I want."

How that will all play out, we'll have to wait and see, but in the meantime, let's see what we can learn about this potential frontrunner from social media.

He Makes His Own Alcohol

This photo doesn't include a link or information about how to actually buy Luke's alcohol, but the caption says he's "got a seriously delicious jalapeño tequila and strawberry tequila hitting shelves with our raspberry vodka." An entrepreneur, indeed!

He Supported The Women's March

The biggest question when it comes to dating a political consultant is what kind of politics they actually support. Luke posted this back in 2017 from the Washington, D.C. Women's March, which is a reassuring sign.

Luke's posted photos of everywhere from his hometown of D.C. to the streets of Croatia. He's also been spotted in Indonesia, where he said he worked to overcome a fear of heights to get to the top of an oceanside peak. Perhaps he was just preparing for the inevitable one-on-one date where he'll have to jump out of a plane or off a very large platform.

He's Worried About The Environment

In a caption for a video of him scuba diving in Indonesia, Luke warned that we should be keeping our reefs safe for ocean creatures like sea turtles. Save those oceans, Luke!

He Has A Big Circle Of Friends

Luke has tons of photos of himself and friends on his Instagram feed, usually on a big group outing or vacation. There are men and women alike in his close-knit groups, some of which appear to be longtime friends, which could be a good sign that he's easy to get along with.

He'll Be Posting About Hannah's Season

Unlike some of the men on the show, whose Instagrams remain private, Luke S. has posted screenshots of his time with Hannah and it seems like he'll keep doing so as the season continues. Perhaps his feed will yield some clues about who makes it to the final rose.