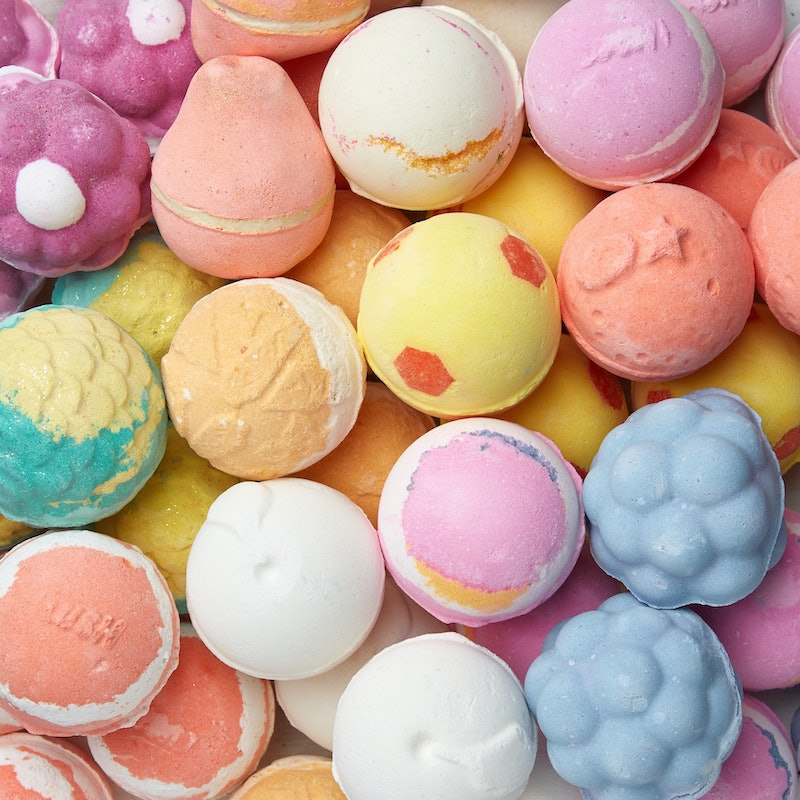 Although 2018 is coming to a close, it's about that time where people look back on the year to appreciate the journey they've had. In the case of Lush Cosmetics, the brand has looked back at its discontinued and is now dropping 12 new limited edition bath bombs, all in scents that fans said were there favorite from the natural cosmetics brand.

According to Refinery 29, the 12 bath bombs won a space on shelves in "elections" held by the brand. Thankfully, the die-hard Lush fans have ensured the return of some of the most coveted scents ever made in the form of the beloved (and vegan-friendly, cruelty-free) bath bomb.

The resurgence of sweet smells from the past may be nostalgia overload. Between original Lush bath bombs getting an upgrade and bubble bar fragrances receiving a bath bomb makeover, it's a whole lot to handle. On the other hand, once you plop one of these in your tub, you'll be glad you came to the bath bomb party.

Lush announced that the restored scents will drop in stores the day after Christmas and are currently being sold online for the time being. If you think you might want to pick up one of these babies for some self care in the new year, here's where to start.

A mix of cocoa butter and shea butter is a match made in heaven for the holiday season, which is why Lush has resurrected its past holiday number, Yog Nog, in this limited collection. The bomb is filled with spicy cloves and floral ylang ylang.

The description on The Comforter's Bubble Bar form — "Pink and Sweet" — is probably enough to sell you on its bath bomb remake. Packed with fruity fumes, this is one bath bomb you want to go off.

Getting giddy yet? This is one's a throwback to Lush's original Blackberry Bath Bomb, only with a new look to go with its classic lemongrass, olibanum, and neroli formula.

If you've ever dreamed of soaking your body in a milk bath, this is probably the closest you'll get to that aspiration. The So White Bath Bomb clouds your tub into an all white shade infused with aromas of apple and rose.

This bath bomb already looks like a rainbow party in the tub. It's smell is also reminiscent of Lush's Vanilla Strawberry American Cream Conditioner.

A bath bomb reissue with hints of marigold petals, this Day of the Dead-inspired bath bomb is making a comeback in the form of a hot pink and yellow bath coloring.

Honey I Washed The Kids Bath

This new bomb is a caramel-scented fan fave derived from the brand's scrub and body spray of the same name.

The Melusine Bath Bomb is like washing up on the shores of mermaids. It also doesn't hurt that fans of the Avo-Co Wash will get the same aroma in this bath bomb.

While this is currently on shelves as a soap, the brand is bringing it into bath bomb form to help clear the mind with its notes of spiced fruits and zesty Brazilian orange oil.

Dive into scents of chocolate and citrus with the Yuzu & Cocoa Bath Bomb while grapefruit and bergamot oils help you cleanse and brighten.

Tender is The Night Bath Bomb

Think pink when you're pondering about tossing this vanilla absolute and jasmine absolute-infused bath bomb into your shopping cart. It's a chill night when dipping into this kind of bath tub.

Whether or not you're a die-hard Lushie, these new bath bombs are something to get excited about. They'll only be here for a short time, so make those self care Sundays count and drop one of these balls in the tub.