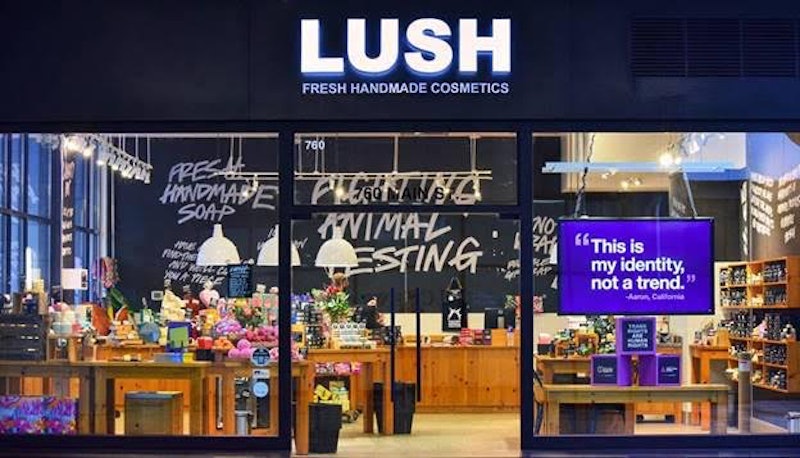 More and more brands are deciding to use their platforms to advocate for social change, and Lush is the newest company to join those ranks. Lush has always been an inclusive brand, so when their transgender employees and colleagues began to share the discrimination they face, the brand says it felt it couldn't stand on the sidelines any longer. That is why Lush launched the #TransRightsAreHumanRights campaign, taking concern and translating it into action. And, of course, charitable products.

In this 14-day national campaign, Lush is releasing an exclusive bath melt called the "Inner Truth," and 100 percent of the proceeds (minus the taxes) will be donated to organizations working to secure transgender rights. The goal is to raise $450,000, and the brand will donate the proceeds to the campaign's partners — The National Center for Transgender Equality and the Canadian Centre for Gender and Sexual Diversity. In the US, the National Center will use the funds to support high school-based race and gender justice training for teens. In Canada, the donations will fund resiliency training and community-building camps for trans youth.

The bath melt retails for $5.95, and it's in the shape of a heart broken into two colors: blue and pink. As it melts it lets off a swirl of pink and blue, melding into the color purple. The melt seems to represent the complexity of gender far beyond two binary categories, and also nods at a purple color that has become known as a LGBTQ equality hue.

But the brand isn't just raising funds — they're also raising awareness. As part of the campaign, 250 stores (which is every single one of their store fronts) will take down their window displays filled with dessert-like looking soaps and colorful bath bombs, and replace them with the stories of transgender people.

The windows will hold honest quotes about transgender identity, coming straight from their staff's experiences and points of view. Detailing everything from the fears of being abused to the realities of being homeless because of one's identity, their windows will create an honest and true portrait of what it means to be transgender in North America. And seeing how hard it is to ignore a window display while walking down the street, it's an ingenious way to share that truth with people who might not necessarily seek that information themselves or be willing to hear it.

“As an inclusive employer which champions equality, we simply can’t stand by knowing our co-workers fear for their lives should they choose to live their true selves in public," says Carleen Pickard, Lush's ethical campaigns specialist. "Our campaign aims to shed light on these daily discriminations and provide impactful tips individuals can use to make all spaces safer.”

But this isn't a month-long campaign that addresses the issue and then melts away into obscurity. Lush is hoping to create lasting resources with the #TransRightsAreHumanRights initiative. In addition to the donations and window displays, the brand launched a Trans Rights landing page on its site that will act as a hub with resources for both allies and the trans community. Even after the campaign is done, this landing page will continue to be live.

Lush also plans to distribute 75,000 ‘How To Be An Ally’ pocket manuals in its store locations to help guide cisgender people to become stronger and more informed allies. The brand will also use its Snapchat to share tips and resources for transgender and questioning youth during the length of their campaign.

And to further share first-hand experiences, they will also release series of short documentaries that share the real experiences of trans allies in the hopes of creating a more informed and accepting society. Now that's how you run an impactful beauty campaign. Brands, take note.